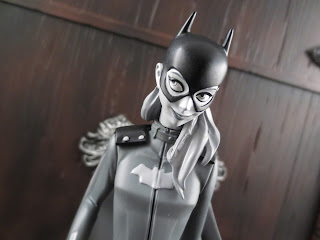 In 2014 DC Comics took a different direction with Batgirl by switching up the creative team. While Brenden Fletcher and Cameron Stewart certainly helped to take Barbara Gordon's story in a different direction, artist Babs Tarr really helped to set the tone with her incredible new art for the series. The new style of the Batgirl of Burnside definitely struck a chord and I imagine that a number of fans looked at Tarr's art and decided they immediately wanted to see it as an action figure or statue. The first three dimensional version of the Burnside Batgirl available has been released in DC Collectibles' long running Batman Black & White mini-statue line. I preordered mine last year through Big Bad Toy Store but it only came in stock late last month, even though many folks seemed to have picked their up in August of 2015. This is a cool statue that I love, but I do have a bizarre mystery that I've been working to solve: Why does my statue have a magnetic, removable head? I've read and watched many reviews of this statue and I have not yet seen anyone's who has a removable head. I have some theories about this, but I'll share them in the main body of the review. Ready for a closer look at the Cameron Stewart and Babs Tarr's Batgirl? then join me after the break... 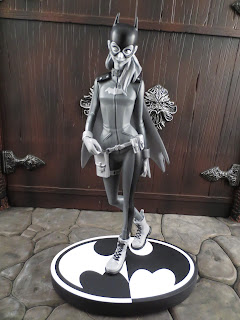 Removable Components: Head (attaches via a magnet) and base. 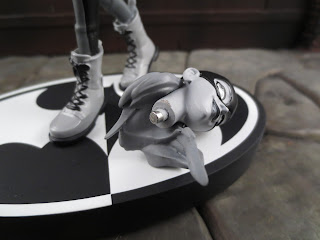 So... here's the magnetic head I've mentioned that as of this writing I have not seen anyone else mention. It seriously freaked me out when it rolled out of the package when I was opening my statue (which arrived sealed and new from Big Bad Toy Store). You can see the neck peg here very clearly which actually lets the statue have the tiniest bit of articulation. My thought is that DC Collectibles had some of these statues break and they shipped the later run with magnetic necks to prevent further breakage. My statue is #4536 of 5200. 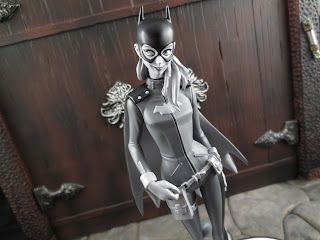 * One of the things I love best about this statue (and there's a lot I love) is the pose. It's just very casual and fun, which absolutely fits the new take on Batgirl. That's not saying Batgirl isn't as tough as nails when she needs to be, but she's also a graduate student trying to have some fun as well. She looks confident, relaxed, and ready to get something started. Batgirl is a bit of a celebrity in trendy Burnside and this statue shows Barbara trying to exude some of the confidence needed to pull that role off. 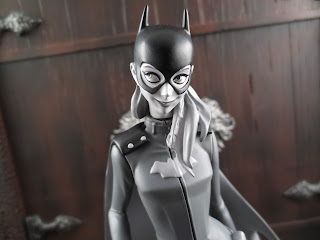 * The expression here is great and really captures Tarr's artwork well. It's an incredibly cute depiction of Barbara in a more relaxed and carefree moment.

Pay closer attention and you'll notice the buttons on her shoulder: Batgirl's cape actually buttons on to her jacket since her new outfit is designed to be able to be carried covertly and placed on quickly. 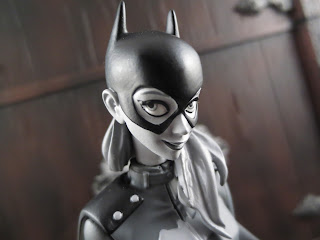 * Here's a close-up of the lovely Ms. Gordon. Her eyes sure are great, aren't they? Sculptor Irene Matar really did an excellent job, didn't she? This is just incredible. Had I received this last year, it without a doubt would have made my top 10 of 2015 list. 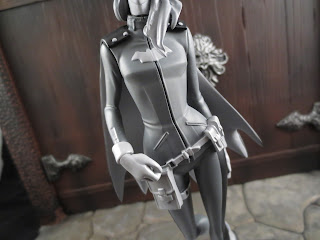 * Batgirl's new costume here isn't spandex or body armor: It's actually a leather jacket that zips up in the middle. While it's somewhat of a stretch to believe that Babs would be using something this simple in light of the events she's gone through in the previous New 52 events such as Death of the Family and Night of the Owls, I guess she feels that Burnside is a bit less crazy than the rest of Gotham. It's not a form fitting outfit but it drapes over her nicely and has some great sculpting to convey the folds of the material. Also, I'm digging the work on her very practical looking utility belt. 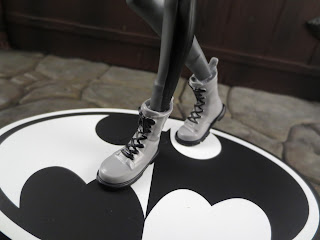 * One of the best things about the new Batgirl costume is that Batgirl has some footwear that I can believe she could literally kick butt in. I'm not saying that you can't fight in high heels or knee high armored boots, but these actually look comfortable and functional. I also like how they look just a bit larger than the rest of Batgirl's rather sleek costume. The sculpt looks great and the paintwork on the laces is pretty clean, too. 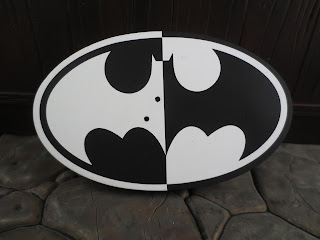 * Batgirl has a base that's styled the same as the other statues in this line: It's a simple black and white Batsymbol. When I was asking about this piece over on Statue Forum due to my curiosity about the magnetic head, some folks asked me if I possibly had a 2nd Edition statue and then educated me on what to look for, as this is my first statue in this series. This is clearly a 1st edition base, as the 2nd Edition bases swap the colors meaning the white bat is on the right and the black bat is on the left. 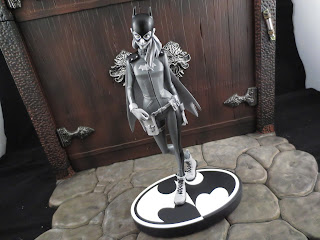 
*My only negative with this statue is that Batgirl seems like she leans just the slightest bit to the left (and that's not a political joke). It's not noticeable at all angles, but at some angles I can't help but feel that she's leaning more to her right than she should be. 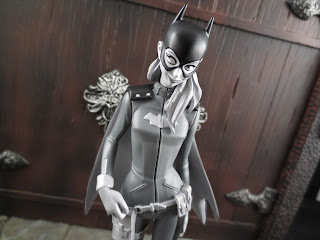 Since Batgirl is pretty much the only character I collect statues of, this is my first foray into the Batman Black & White line, but I can definitely see why it has so many fans. I love the compact size and the gray-scale coloring of the line. Of course, the excellent subject matter of Stewart and Tarr's rendition of the Batgirl of Burnside also helps to make this a brilliant piece. The little bit of a tilt doesn't bother me too much (I do notice it, though), but everything about the statue is just so well done that I can almost forgive it. At the end of the day, I'm giving this one a Great and a 1/2 rating. I'm usually pretty harsh on Batgirl statues, but I think this one is a real gem and a fine addition to the collection. I'm not sure why she's taken so long to be released in some markets while others got her back in August, but if you're interested in her you'd probably better jump in now and snag her.


I have an entire collection of Batgirl statues, comics, action figures, autographs, and more! Check out some pictures and everything I've reviewed here!
Posted by Barbecue17 at 2/07/2016