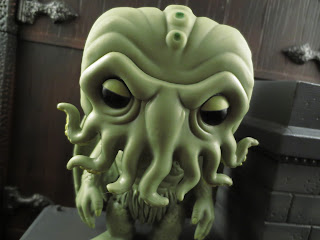 One of the coolest things about a convention is seeing stuff you didn't even know existed. Honestly, while I always check out POP! figures I had no idea that Funko made a Cthulhu POP! figure. He seems to have been released last year, but I've somehow missed him. I guess that's just how Cthulhu likes to roll. Anyways, I saw this figure available from a few different vendors for between $15 and $20 but I finally picked him up from a vendor who was selling POP! figures and some awesome art prints. I got four art prints, and two POP! figures for $40, not a bad deal if you ask me. Cthulhu: Master of R'lyeh comes from a subset of POP! figures called POP! Books, which makes sense as Cthulhu is derived from the writings of H.P. Lovecraft. Ready for a closer look at one of the elder gods? Then join me after the break... 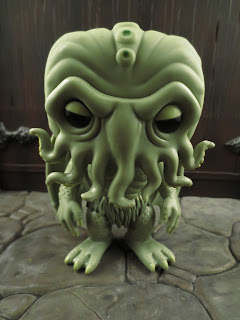 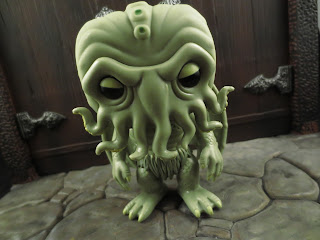 * This is a great looking Cthulhu! You can definitely see the POP! influence if you're looking for it but I think this guy really excels as just a great Cthulhu figure. Heck, I bought him to go along with my Legends of Cthulhu figures from Warpo Toys and I'd honestly consider buying the other color variations too, as this guy really adds some diversity to a Cthulhu collection. 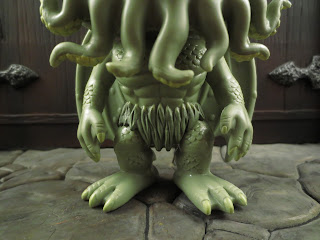 * I'm really impressed by the level of detail on this figure. I mean, there are some fairly nice POP! figures but this guy takes the cake. His skin is covered with scales, his tentacles are covered with suckers, and he's wearing a furry Masters of the Universe styled loincloth. Heck, this guy might fit in pretty well with your vintage Masters of the Universe figures as Cthulhu Man! Seriously, this guy's fun to look at and really shows off what Funko's sculptors are capable of. 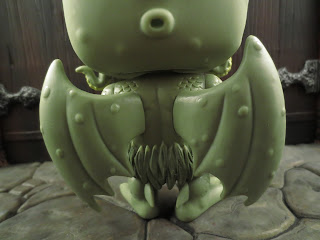 * Here's a shot of Cthulhu's wings. Lovecraft described Cthulhu as "A monster of vaguely anthropoid outline, but with an octopus-like head whose face was a mass of feelers, a scaly, rubbery-looking body, prodigious claws on hind and fore feet, and long, narrow wings behind." These might not be "long, narrow wings" but they get the point across in the stubby proportions of a POP! figure. This really makes me want Funko to do a line of POP! Cryptids! I want a Mothman! 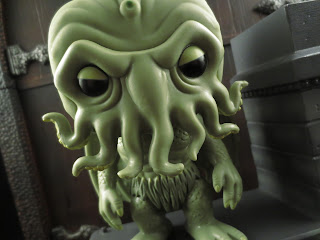 I really like this guy. He's a great Cthulhu figure, and really, there aren't that many Cthulhu based toys out there. Whether he joins the rest of your POP! collection, guards your copy of the Necronomicon, play along with other fantasy/ horror based figures, or just chills by himself on your bookshelf, this is a POP! that is probably the coolest I've ever seen. Just a week or so ago I stated that the flocked Chewbacca POP! from Smuggler's Bounty as my favorite. Well, Cthulhu here has surpassed Chewie as my new favorite POP! Definitely worth an Epic rating spoken in one of the ancient tongues.

If you're interested in Cthulhu, I've reviewed all of the Legends of Cthulhu line from Warpo Toys:
Conjured Cthulhu
The Cultist
Deep One
The High Priest
The Professor
Spawn of Cthulhu

If you're into POP! figures, I've reviewed a few others, including: