Masters of the Universe Day 2020: He-Man from He-Man by Mattel 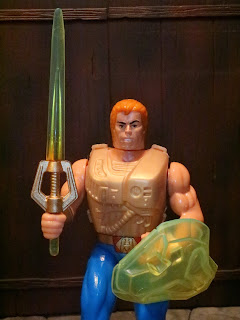 Let's start with a review of the man who started it all: He-Man! To kick off Masters of the Universe Day 2020 I'm going to be checking out the New Adventures He-Man figure from 1989! Why? Because today I'm going to pay tribute to the cast of the original vintage 1982 line of Masters of the Universe figures by looking at how those characters were reinterpreted as toys in different lines over the years and the most unique re-imagining of He-Man I can think of is the 1989 sci-fi/ fantasy He-Man. Released only a couple of years after the vintage line ended, Mattel's He-Man line (usually referred to as New Adventures by fans due to the Jetlag Productions animated series) offered a new take on the character. Rather than continuing to defend Eternia the New Adventures of He-Man sent the titular character into space to defend the planet Primus from the Evil Space Mutants. Of course, Skeletor went along for the ride as well! The "He-Man" figures were a radical departure from the classic MOTU style as they're slimmer, articulated different, and are far more science fiction than barbarian fantasy. I remember getting many of these as a kid as I would have been in the prime age (I would have been 5 or 6 in 1989) but they always did feel very different and not quite "He-Man" enough for me. Looking back years later I find them quite fascinating (though I love the Masters of the Universe Classics versions of the NA characters the best) and enjoy collecting them when I can. Let's take a look at Mattel's first attempt to relaunch He-Man after the break... 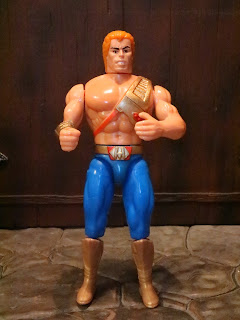 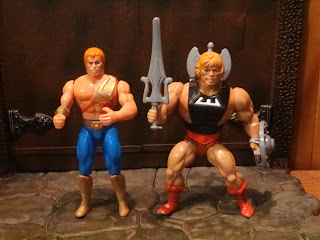 *  On the left is the New Adventures He-Man while the vintage He-Man (yes, my childhood He-Man is missing his original armor) is on the right. Looking at these figures definitely shows off how different they are, doesn't it? 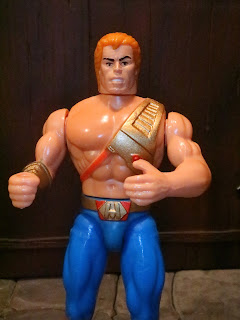 * He-Man is slimmer (though still pretty shredded) and he's wearing more clothing here. In the future He-man has discovered pants! I'm not wild about the look of this figure but it's not bad. It has kind of a Flash Gordon/ retro sci-fi feel to it which is quite refreshing. While he doesn't have his classic harness, He-Man's new harness is kind of cool. He's also sporting an interesting belt buckle with a logo that combines an H and an M. 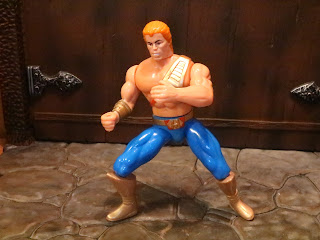 *  He-Man's articulation is improved a bit from the vintage toys, at least so far as the number of joints go. While he can stand upright, the swivel/hinge hips and knees were rather unique articulation points at the time for a figure this size and allowed for some deeper, wider battle stances. 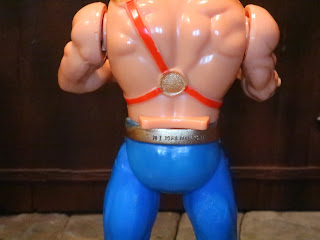 * The packaging advertises "Masters Action" which apparently refers to He-Man's arms raising up and down when you swivel his waist. There's a thumb groove on his lower back which you can, place your thumb on and rotate it to cause his arms to move. 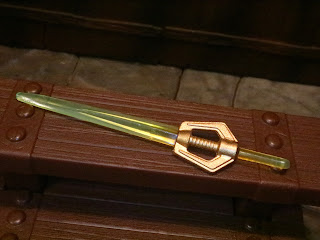 * I do love the design of He-Man's New Adventures sword. No, it's not the Power Sword we all know and love, but it is a cool sci-fi design that combines a classic sword with a lightsaber. The translucent blade green is a nice touch. 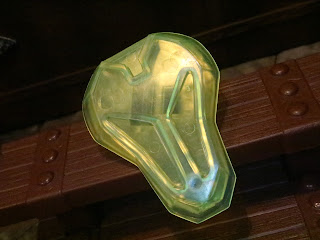 * The shield is also cast in the same translucent green plastic, perhaps reflecting that it too is made of energy of some sort. It easily fits over He-Man's left hand and stays in place quite well. 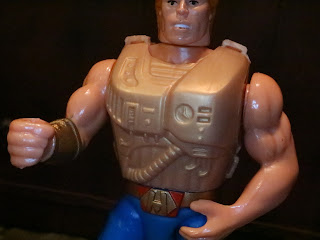 * For traveling into space He-Man includes some technologically advanced Battle Armor. I love the look of this as it's covered with all sorts of tubes and dials. It's made from two pieces that snap together (similar to the vintage MOTU armor so many figures sported) but it's softer and less brittle, meaning it's not going to break. 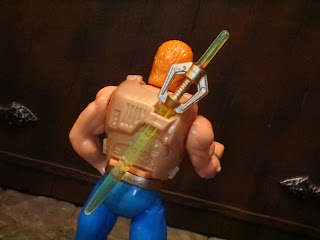 * There's even a slot in the back to stow away He-Man sword! How cool! 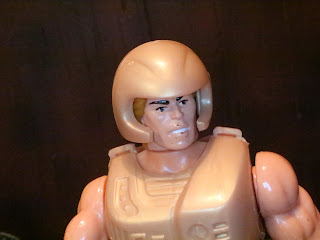 * He-Man comes with a helmet to fully gear him up for space combat. It's nice to get an extra accessory but it looks really bizarre. It's too big and just doesn't fit him all that well. 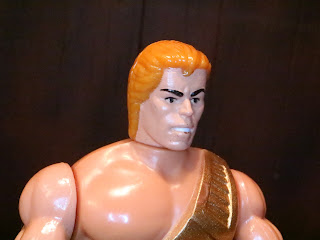 * Speaking of He-Man's head I have to admit that I've never been a big fan of this head sculpt. The face definitely looks like a slimmed down version of the vintage toy, buy what's going on with the hair? The cartoon gave He-Man a ponytail, but there's no ponytail to be found here. It's all slicked back and odd looking. I don't know. I've just never liked this one all that much. 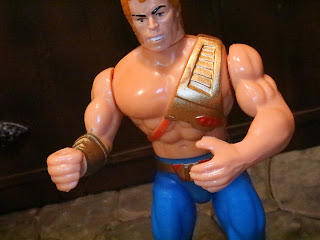 * Due to his action feature you can really move He-Man's arms on their own without having to "force through" the action feature. It's weird that something designed as a play feature somehow makes the figure less playable. 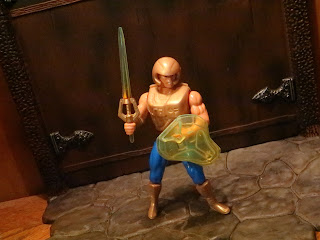 I actually like the concept of New Adventures, and I enjoy the toyline and the comics, but it wasn't until MOTUC that I really liked the execution of the idea. As for the original He-Man figure from this line he's not a terrible toy, but he's not the knockout he should be. He's got great accessories and there are some very cool elements to the design, but there are other things like the headsculpt and the inability to really pose his arms that leave me cold. He's a Good and a 1/2 figure and while NA does have fans, this isn't what most people think of when they think of He-Man.

For more He-Man figures from Mattel, check out the following:
Artilla/ Weaponstronic
Posted by Barbecue17 at 4/28/2020