Minifigure Review: He-Man (Orange) from Masters of the Universe Micro Vinyl by Super7 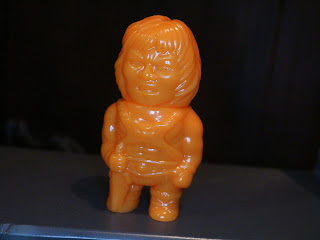 Just last week Super7 listed a few Masters of the Universe vinyl toys which they originally released at the Five Points Festival earlier this month. While some of the figures were fairly expensive, I really wanted to add at least one of the He-Man and Skeletor minifigures to my collection. Each of the figures came in either orange or blue so I ordered one of each sculpt: An orange He-Man and a blue Skeletor (that made sense to me). Super7 shipped these quickly and they arrived on Saturday. Ready for a quick look at a Japanese vinyl styled He-Man? Then join me after the break... 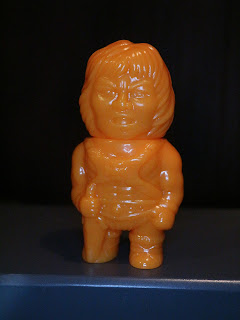 * The figure's sculpt is much clearer and crisper in person than my pictures make it seem. It's a very vintage styled He-Man and all of the details you'd expect are there. He-Man was made in Japan and is a traditional soft hollow vinyl figure. He really has a cool feel to him that is unique from the hard plastic or rubber minifigures I'm accustomed to. 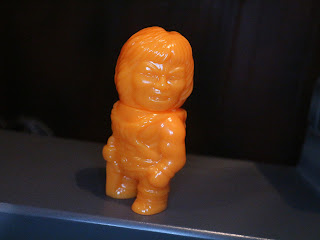 At $10 dollars He-Man does feel a bit more expensive than he should be, especially compared to the usual price of minifigures. Still, he is a fairly limited release from Super7, so that has to be kept in mind. I like him as he definitely has a cool vintage aesthetic and captures the old school MOTU feel quite well. He also has a swivel neck, so there's a bit more going on here than with a typical minifigure. He's a Good and a 1/2 figure for minifigure aficionados who happen to also be MOTU fans. He's sold out now, though, so if you dig him you'll have to resort to the aftermarket. Good luck.


He-Man/ Prince Adam is one of my favorite characters and I've reviewed quite a few toys of him: The Series 3, Series 2 and Series 1 M.U.S.C.L.E. He-Man and Prince Adam minifigures, plus the Masters of the Universe Classics Galactic Protector He-Man, the future King He-Man, Laser Power He-Man, Snake Armor He-Man, and Flying Fists He-Man, the Super7 Prince Adam (Laughing) exclusive and Ultimates Filmation He-Man, the Mega Construx He-Man from the Battle for Eternia Collection and the He-Man from the Wind Raider Attack set, the 200x He-Man minifigure from the first Heroes vs. Villains Gift Pack, the ReAction Slime Pit He-Man, the Mondo 1/6th scale He-Man, and the Funko VYNL Prince Adam + Cringer set.
Posted by Barbecue17 at 6/12/2019