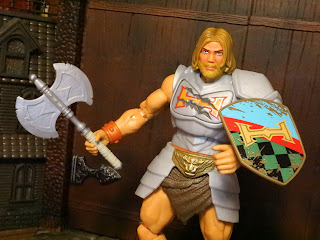 Today's the last day of this Masterverse mini marathon and I'm actually wrapping things up with what might be my favorite Masterverse figure of the year: The New Eternia Battle Armor He-Man. I'm a big fan of the New Eternia style, I've always loved Battle Armor He-Man, and I really dig the barbarian/ fantasy aspect of Masters of the Universe, so a bearded, Battle Armor He-Man just checks all of the boxes for me. The pack of the package describes this figure as General Adam in his powerful Battle Armor on a quest to find the Isle of Grayskull and the legendary Power Sword. Once he has the sword, he can finally change into He-Man. Interesting concept. So maybe this really isn't a powered up He-Man, but General Adam armed and ready for battle? Or is this him after finally finding the Power Sword? I'm digging this slightly changed version of the MOTU story and I'm absolutely loving this figure. Let's check out Battle Armor He-Man after the break... 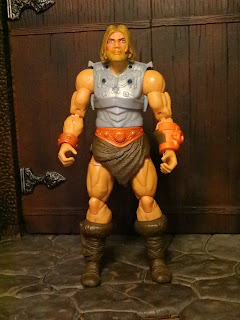 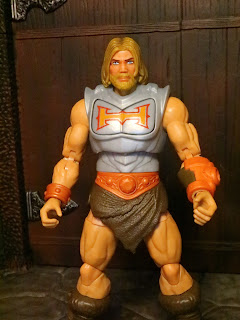 * If you take off all of the extra stuff you have a very basic Battle Armor He-Man in the Masterverse style. He shares many of his parts with the standard New Eternia He-Man, but his torso is all new since he's sporting Battle Armor. The wrapped loincloth and elaborate are the same, but now they're cast in a familiar orange that looks slightly metallic. Overall, everything blends together perfectly and just looks awesome. This is easily one of my favorite He-Man figures ever. 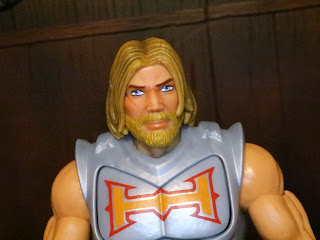 * One of the things I love best about the figure is the bearded portrait. Whether you all it General Adam or He-Man, this is about the roughest, toughest, most no-nonsense depiction of He-Man ever. I loved the King He-Man figure in MOTUC and this guy gives me the same kind of vibes. The sculpt is really cool, especially showing off the different textures on the hair and beard, and I'm really a big fan of the scar below his right eye. 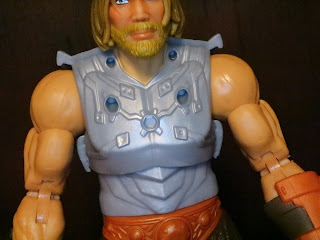 * The front of He-Man's battle armor pops off to reveal some interesting details underneath. I'm getting a little bit of a circuitry vibe, like maybe this armor is hiding some ancient Eternian technology that's been nearly forgotten. 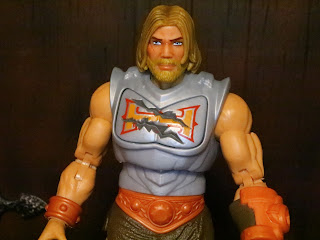 * The armor has two swappable plates, one with a clean stylized "He-Man" symbol and the other with two gouges in it. The armor bits swap out easily and stay in place. It works really well and looks fantastic. 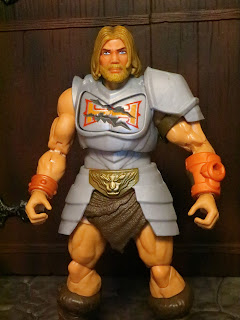 * To really deck out this New Eternia version of Battle Armor He-Man just attach his armored belt and the oversized pauldron on his left shoulder. They both fit on the figure snugly and they're easy to take on and off. The belt buckle on He-Man's belt looks like the beast of the Central Tower of Eternia, doesn't it? 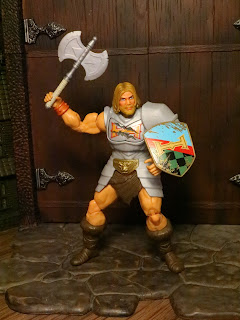 * Battle Armor He-Man's articulation is the same as most of the previous Masterverse He-man figures, though the armor does impede movement a little bit. Not much, though, and everything meshes together quite well. Everything feels very modern with double jointed knees and elbows, all with a good range of motion to them. It's not as smooth as, say, most of Hasbro's modern offerings but it rivals most everything else out there in this scale and price point. Mattel has done a really nice job with the line so far. 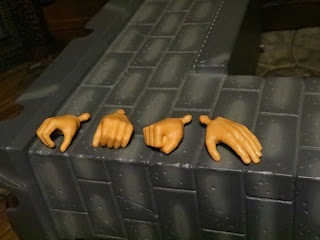 * Battel Armor He-Man also comes with the same four interchangeable hands as most other Masterverse He-Man figures: There's a pair of standard grips, a right handed fist, and an open left hand for smacking some sense into Beast Man. They swap easily and the pegs all feel nice and sturdy. 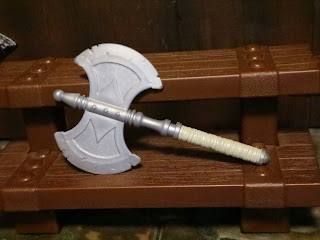 *  For the past few years most of the axes that have come with He-Man figures have been based on the minicomic axe design from Alfredo Alcala's art. This axe is definitely much closer to the vintage toy axe I've always loved which matches the Mark Taylor He-Man concept art fairly well. This axe has more detail to capture the blade designs of the vintage figure, though some wear and tear has been added to the edges of the blade. This version of Eternia is a rougher, more violent place it would seem. This same axe came with the previous New Eternia He-Man but now the handle has been given a paint application. 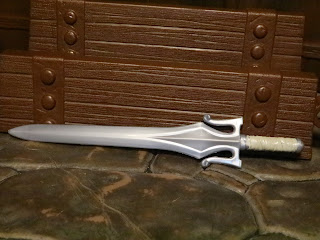 * The sword is also reused, too. It is different from the Revelation design with more pronounced tips on the quillons and a wrapped handle, though it still has the longer, thinner blade. It's a nice looking sword that fits the world of New Eternia perfectly. 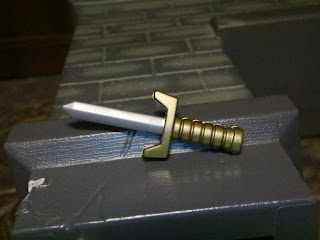 * A third reused weapon is the dagger, a throwback to the concept artwork for the original He-Man figure. It's a simple but neat little dagger perfect for some up close fighting. The handle of this dagger is more of a bronze rather than the gold of the previous New Eternia He-Man, and I tend to think it looks a bit better this way. 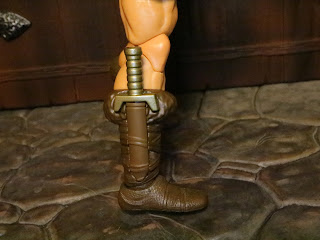 * The sheathe for the dagger is permanently attached to He-Man's right boot (it's the same sculpt as the basic New Eternia He-Man) and the dagger fits inside securely. It looks great and turned out even better than the MOTU Origins boot dagger. 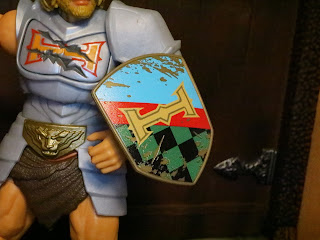 * Rather than his standard round shield, Battle Armor He-Man comes with a what I believe is called a "heater" shield.  This accessory doesn't have straps on it but instead plugs into the oversized bracer on He-Man's left forearm. The paintjob is really nice on this as it's based on the shield design from the Dragon Walker vehicle. 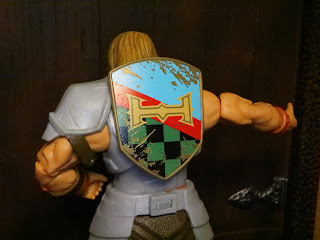 * You can also store the shield on the back of He-Man's armor. There's a socket there, too, so the shield can be conveniently stowed away. 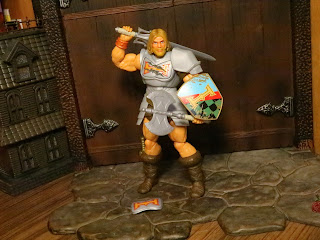 I'm absolutely loving this figure. It's a fantastic take on Battle Armor He-Man and not only is it one of the best figures in the Masterverse line , it's also one of my favorite He-Man figures in my collection. And, believe me, I own a flipping ton of He-Man figures. I love the armor, the shield, the weapons, and that bearded head. He-Man just looks so cool here. If He-Man was hanging around with Conan or was starring in an early 1980s Swords & Sorcery film, this is what he'd look like. This guy is Epic and is absolutely worth tracking down.
Are you a fan of He-Man/ Prince Adam? I am too! Check out Fabulous Secret Powers where I store reviews of all of my He-Man reviews!