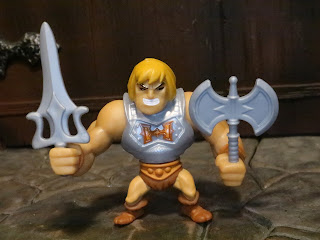 I've finally been able to acquire some of the third series of Mattel's Masters of the Universe Eternia Minis! Before we kick things off with a look at Battle Armor He-Man allow me to rant for a moment: Why does Mattel have such poor communication with collectors and retailers? When Hasbro makes a big announcement their retail partners are typically all ready at the same time for preorders with official press photos and estimated release dates. Mattel showed off the third series of Eternia Minis last year at Power-Con and they recently showed up in stores with no fanfare, a different assortment of figures, and missing the cool Slime Pit themed cases that they were originally shown with. Oh, and retailers selling these or offering preorders had no images until fairly recently. Seriously, Mattel, get someone to handle this stuff! Anyways, on to He-Man! Battle Armor He-Man is another "re-do" of one of the figures from the 2014 MattyCollector exclusive Masters of the Universe minis line. The first two series of the Eternia Minis came "blindboxed" in plastic cases although they did have a code identifying the figure inside so you could make sure not to get duplicates. Now they're sold on little mini blister cards so you can pick exactly who you want (if you can find them). Let's take a look at Battle Armor He-Man after the break... 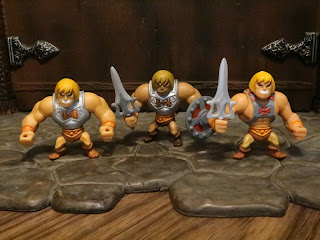 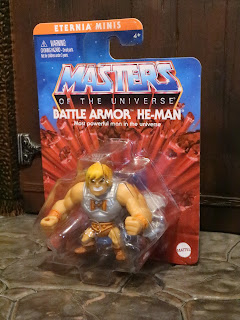 The Packaging:
* Rather than being packaged in the cool little clamshells inspired by MOTU playsets (this series was supposed to have Slime Pit inspired packaging) series 3 just comes on a blister card. It's still nice looking and it does sell the figure nicely but I do miss the little miniature playset. 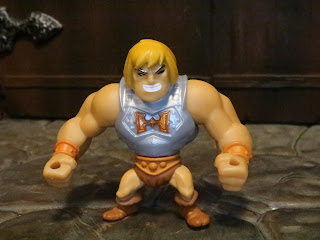 The Positives:
* I've always loved Battle Armor He-Man and while this version isn't as nice as the older MOTU Minis version it's still a pretty cool figure. The paint work is cleaner than on the earlier Eternia Minis and the "H" logo on the battle armor is super clean and neat. 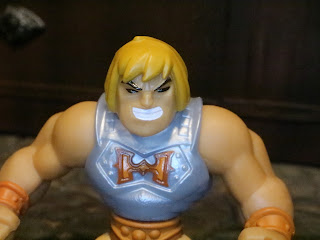 * Battle Armor He-Man shares the same portrait as the series 1 He-Man. It's stylized and does a nice job of capturing the feel of the vintage toy but giving him an over the top grin or grimace. 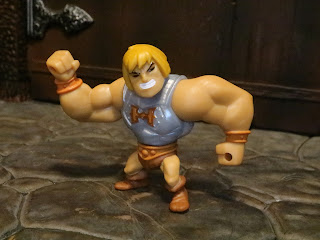 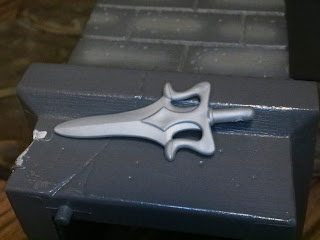 * He-Man comes with his Power Sword with him and it's molded in a slightly metallic silver color. It looks good and is one of the accessories the vintage Battle Armor He-Man had so I'm all for it. 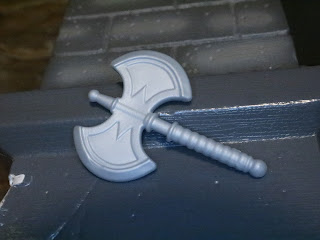 * Like the vintage Battle Armor He-Man this mini version also comes with the battle axe. The first two series of the Eternia Minis figures only came with one accessory each so it's pretty cool that He-Man gets two. I guess it's intended to make up for the lack of the Slime Pit packaging. 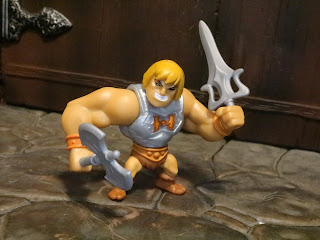 These are pretty nice minifigures and Battle Armor He-Man has some nice paintwork and two fun accessories. He's a solid, durable toy and really is quite nice. I'm disappointed that we're missing out on the cool packaging inspired by the vintage playsets but if it means we get better quality paintwork and two weapons per figure than I'm OK with that. We'll see. I don't know what accessories the other figures have. He-Man gets a Great and a 1/2, though. For $5 bucks or less you're getting a pretty powerful minifigure.
I've reviewed so many toys based on He-Man/ Prince Adam that he has his own review archive. Check out Fabulous Secret Powers for my complete He-Man review archive!
For more Eternia Minis reviews check out the following:
Beast Man
Buzz-Off
Faker
First Appearance Trap Jaw
Golden Armor Skeletor
He-Man
He-Man (Series 2)
Horde Zombie He-Man
Jitsu
Man-At-Arms
Ram Man
Serpent Claw Man-At-Arms
Skeletor
Skeletor (Series 2)
Slime Pit Multipack
Stinkor
Trap Jaw
Posted by Barbecue17 at 5/13/2021