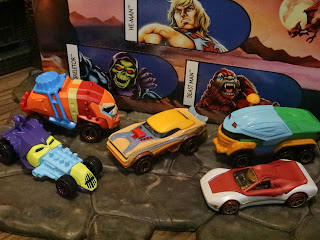 Last year Mattel introduced the Masters of the Universe characters into the Hot Wheels Character Cars brand but I didn't find any until around mid-January. While I rarely gave these a second look when any other property got Character Cars Masters of the Universe always gets a pass from me and I was really excited by these. This set seems to be available through online retailers and it includes all five Character Cars from last year's line (Beast Man, He-Man, Skeletor, Teela, and Man-At-Arms) in one box. I only reviewed Teela and Man-At-Arms from their single packed releases so this is a nice chance to check out the other three in the set. Let's rev up our Road Rippers and check out these bizarre, oil leaking versions of our favorite Eternians after the break... 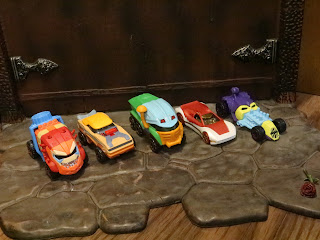 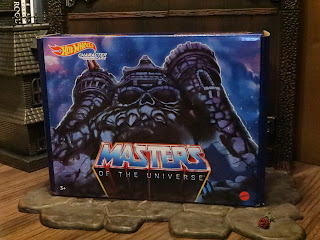 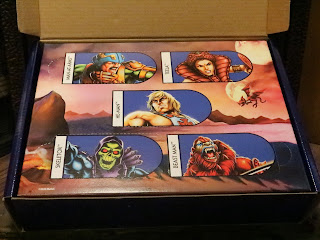 * Inside the box (which is just sealed with a bit of tape) there is a colorful cardboard insert showing the characters all five cars are based on. The idea is that you punch out the character to reveal the car underneath but you can also just lift out the cardboard tray to show the plastic tray holding the cars underneath. It's all very collector friendly and you can remove and replace the cars with no concerns. 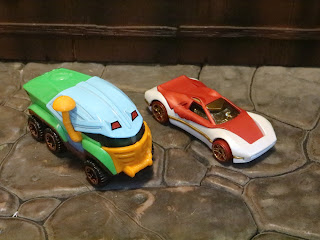 The Positives:
* I've already reviewed Man-At-Arms and Teela from the single packed releases and since they're the same I'll just refer you back to the previous reviews:
Man-At-Arms
Teela 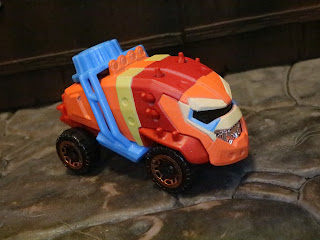 * Let's start checking out the vehicles that I haven't looked at yet with a look at Beast Man! Beast Man is a large armored truck of sorts and there is a lot of color on him to capture all of his details. It's a pretty wicked looking vehicle and seems like something Beast Man would have driven in an early 1990s Toy Biz or Kenner action figure line. 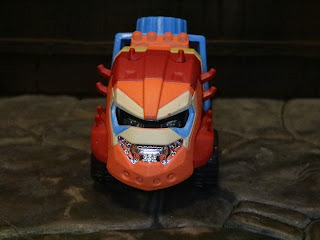 * From the front you can see the windshield which replicates Beast Man's eyes. It's even surrounded by paintwork that captures his cool facial tattoos, too. And the grill? It's sharp, shiny, and looks like Beast Man's vicious teeth! 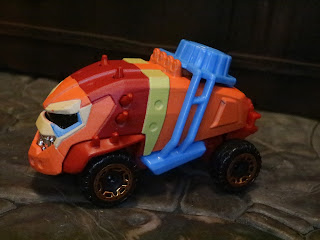 * From the side you get a glimpse of the red spikes surrounding the truck's can which kind of resembles Beast man's furry, spiked collar. The overall design is definitely very reminiscent of the hulking henchman. 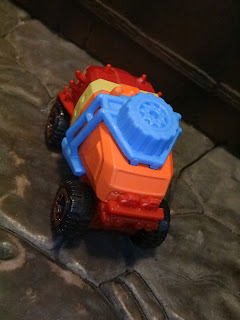 * Beast Man is know for the flashy medallion he wars across his chest like the original gangster that he is. Here, Hot Wheels turned the medallion into what appears to be a spare tire mounted on the back of the truck. It's still blue, making it easily recognizable, and it has the uniquely shaped symbol as the center of the wheel. He's also hauling around a couple of extra fuel cans, too. 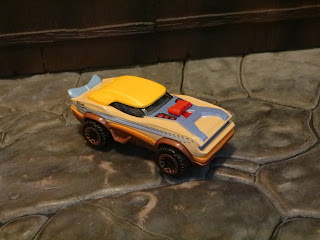 * Next up is He-Man, the most powerful car in the universe! Fittingly, I believe He-Man is what you would refer to as a muscle car and it's definitely bizarrely recognizable as He-man. Yes, the car's paintjob is designed to look like He-Man's muscular body, his yellow hair, and his brown furry trunks. 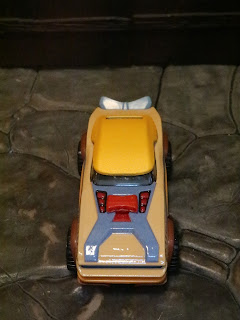 * Where to start? First up, the hood is ornamented with a design that is modeled after He-Man's iconic power harness. The top of the car is also yellow and vaguely shaped like He-Man's ever so stylish haircut. Seriously, if He-Man for some reason appeared in the Disney Cars universe this is how I'd expect him to look. 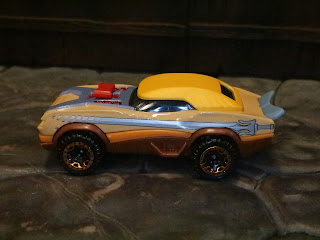 * From the side you can see that the Power Sword has been painted on as a design. 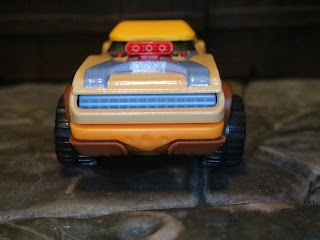 * Want another cool little Easter egg? The front bumper has little divots and is the same color as He-Man's belt! 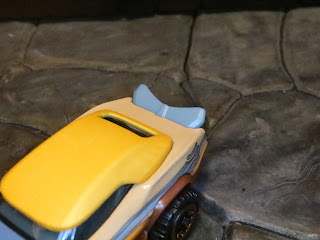 * Last up is this small spoiler in the back. Hey, isn't that kind of shaped like He-Man's axe from the minicomics? That's awesome! 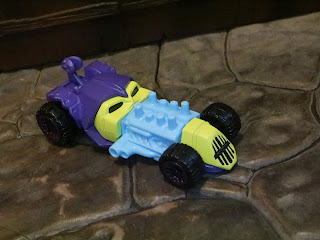 * Last up let's take a look at Skeletor who has been reimagined as an old school dragster/ funny car. You've got purple and yellow, of course, but there's also a light blue engine to capture the tone of Keldor's gar skin in the design. 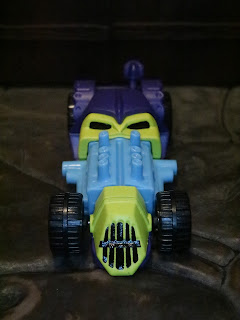 * The front of the car looks really cool. The small windows look like Skelly's eyes, the massive engine is light blue, just like Skeletor's flesh, and the front grill resembles Skeletor's teeth. 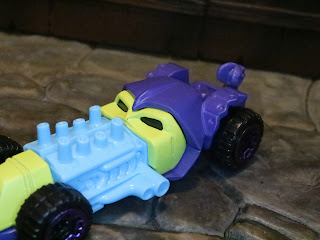 * From the side you can really see the cockpit's design and how the "hood" fits over the skull portion. The rear fenders look like Skeletor's shoulder pads, too, which is another very neat detail. 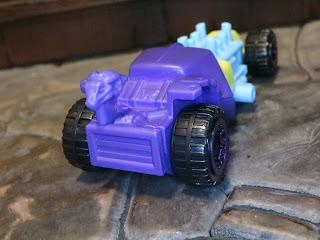 * Check out the rear of the car! Don't you love that decorative Havoc Staff? 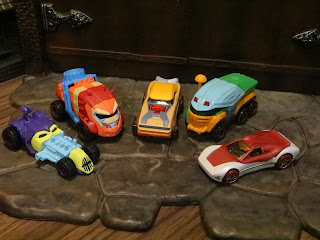 Previously I've always thought the character cars were really, really silly but, gosh, the format works so well with Masters of the Universe. Typically with most properties I just collect straight up action figures but with MOTU I love the weird and wacky variety of products available. This is a great way to pick up all five cars for the same price (or less) as retail with far less hunting involved. This is a Great set and a really fun oddity for your Masters of the Universe collection. With five really ridiculously awesome cars and collector friendly packaging it's tough to go wrong with this set.
I've reviewed so many toys of Beast Man, He-Man/ Prince Adam, Man-At-Arms, and Skeletor/ Keldor that they each have their own review archive. Check out Beast Manor, Fabulous Secret Powers, the Man-At-Armory, and Snake Mountain for all of my reviews of those characters.

Was Teela one of your first loves? If so, check out my reviews of many various Teela toys such as the vintage Teela, the M.U.S.C.L.E. green Teela and the standard M.O.T.U.S.C.L.E Teela, the Hot Wheels Character Cars Teela, the Mega Construx Teela from the Battle for Eternia Collection, the series 2 single packed Teela, and Teela from Battle Bones, the World's Smallest Teela, the 200x Snake Teela, the ReAction Teela (Shiva), the NECA Teela micro-bust, the Masters of the Universe Origins Teela, the neo-vintage Teela and Frozen Teela, the Tweeterhead Teela bust, an appearance in 1983's Colorforms Masters of the Universe Deluxe Play Set, and Super7's Ultimate Teela.

For more reviews from Hot Wheels Character Cars: Masters of the Universe check out the following:
Man-At-Arms
Teela
Posted by Barbecue17 at 3/30/2021