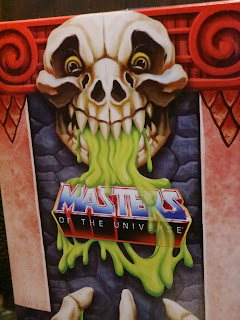 Mattel's Masters of the Universe: Eternia Minis arrived in stores around September of last year and proved to pretty popular. Two series of figures made it to shelves last year along with two multi-packs, mostly comprised of repacks, that showed up at Walmart.com. Now that Mattel's MOTU products are available everywhere there is more MOTU product to go around and today I'm checking out the first 2021 Eternia Minis release I've been able to acquire: The Slime Pit Multipack! Currently Mattel is releasing the Eternia Minis on small, single blister cards but originally it seemed the plan for series 3 was to feature the figures in miniature Slime Pit containers. I'm not sure if those are still coming out or not but clearly this Slime Pit Multipack was intended to tie in with the series 3 Slime Pit theme. This is a very collector friendly boxed set of four figures (He-Man, Horde Zombie Buzz-Off, Horde Zombie Zodac, and Teela). Let's take a look at these little Eternians after the break and see if they still have the power despite their diminuitive size... 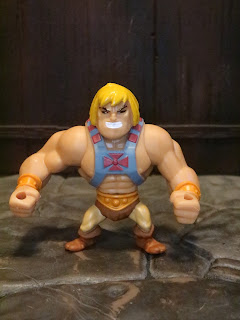 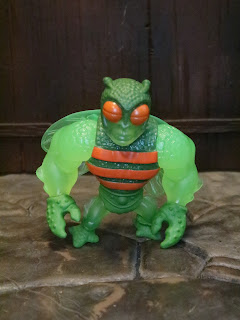 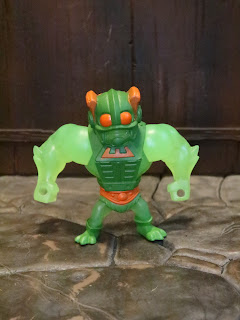 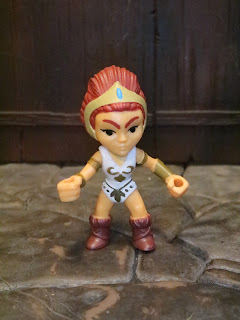 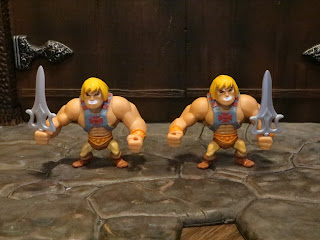 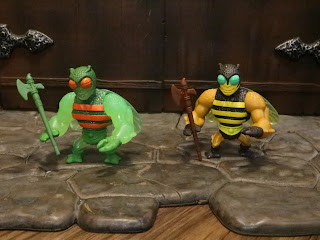 Comparison:
* Horde Zombie Buzz-Off is on the left while the standard Buzz-Off from series 1 is on the right. This one is a simple variant though having Buzz-Off in translucent green is pretty cool looking. 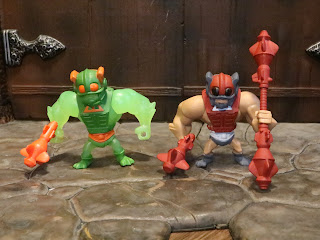 Comparison:
* The same can be said for Horde Zombie Zodac, who is on the left. He's a variant of the Zodac figure from the 2014 Masters of the Universe Minis line (which I haven't reviewed on here yet). 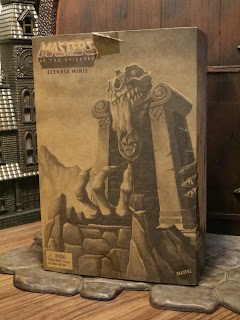 The Packaging:
* I don't usually spend much time on packaging (I honestly rarely acknowledge it) but I'm doing so here for two reason. The first reason is just that the packaging is pretty cool and collector friendly. The second reason is that the packaging is very unusual for a retail product. The colorful box has a cardboard slipcover over it with an image of the Slime Pit on it. It doesn't even really talk about or show off the product. Why is that? I really wonder if these were always intended to be online retailer exclusives or if these were possibly intended to be convention exclusives before Covid-19 hit. They definitely seem more like a convention item than an item you'd find at retail. 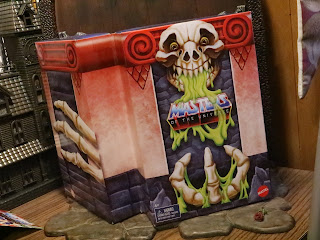 * Beneath the slip cover is a cool box that looks like the Slime Pit. It's bright and colorful but it just opens up with nothing keeping it sealed. Again, I can't see something like this being sold at retail. 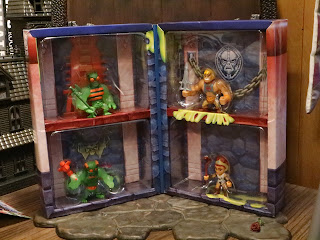 * The figures are just loose inside here, too. Well, they're in molded trays, but there is nothing in front of them and no twist ties or anything. These definitely would not be on retail shelves like this which again makes me wonder if these were always intended to be online e-tailer exclusives or if they were at one point intended as convention exclusives. 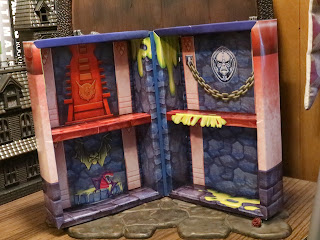 The Positives:
* So... let's nail the positives first, starting with the cool box. The plastic trays are just sitting in the box. Remove them and you've actually got a decent little display set with Hordak's throne and lots of slime. There's even a pit with one of the little creatures from Snake Mountain hanging out in it on the bottom left. 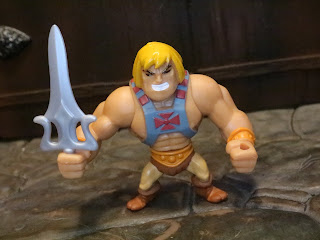 * He-Man is a repack but, ignoring that for a minute, he's still a very cool little minifigure. I like the exaggerated proportions of this guy and the super intense headsculpt. He's also packing a Power Sword and he's poseable. That's pretty good for a minifigure. 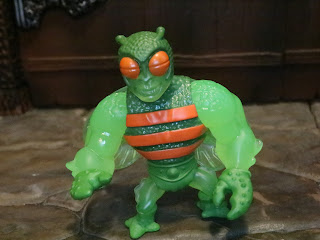 * I wouldn't blame you if you said you picked up this set just because Horde Zombie Buzz-Off is so incredibly cool. He looks amazing in translucent green! The green and red color scheme is amazing and he's got all of the great detail, the exaggerated style, and the articulation of the series 1 Buzz-Off. He's just oozier now. 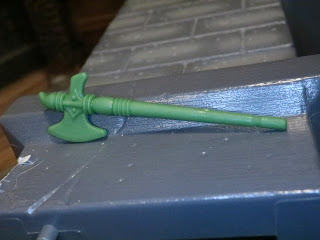 * Buzz-Off comes with his axe though it's now molded in green. I guess it's covered in slime, too. 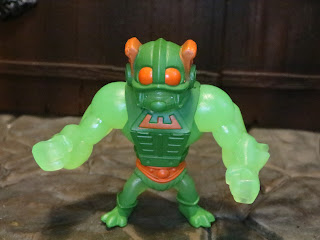 * Zodac is one of the original sculpts from the 2014 series of these figures (then just called Masters of the Universe Minis) but this paint variant is entirely new. The dark green really brings out the details in his armor and the reddish-orange highlights really bring the sculpt to life. I imagine Zodac is pretty powerful, so how did Hordak get him into the Slime Pit? He looks radical, though, and he's buff and poseable just like his fellow line mates. 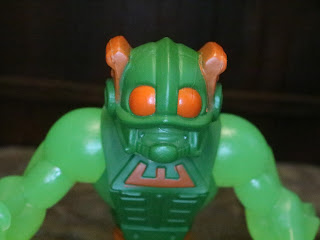 * Zodac's helmet is very cool. It's so funny that he has a helmet that obscures most of his head and yet runs around in some armor and furry trunks. 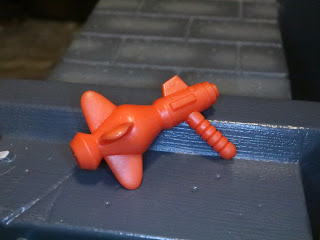 * The original figure that was released on MattyCollector in a 2-pack with Beast Man came with a pistol and a staff but this version just comes with the pistol. It's oversized and stylized but I like the exaggerated barrel and fins. 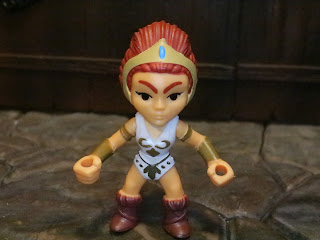 * Teela is the first truly new figure here (though there is a single-carded Anti-Eternia Teela that's floating around right now, too) and it's cool to see a female released in the line. There was a She-Ra from the never released MOTU Minis series 2 that sneaked out and Teela definitely takes after her style wise. The paint's fairly elaborate and while she's not as buff as her male counterparts she is quite stylized. She movies like the rest of the figures in the line as well, so that's cool. 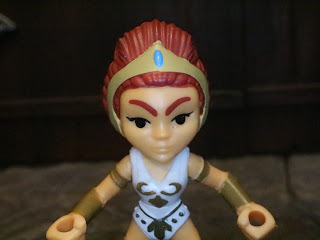 * The portrait makes Teela look aggravated, but that seems about right. She's probably pissed off at Prince Adam for just lazing around or something. The paint on the face is neat and clean and I like the design of her hair and tiara. 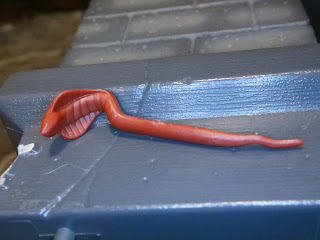 * Teela comes with a pint-sized Staff of Ka to aid her in making the Horde, the Evil Warriors, and any other villainous foes of the good people of Eternia miserable. 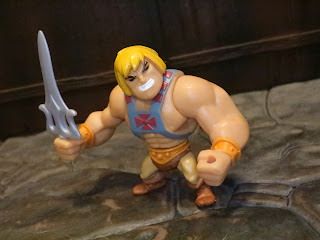 The Negatives:
* Remember when I lashed out irrationally when Mattel released the same darn He-Man figure in the blind boxed series 2 set as they did in series 1? Yeah? Well, they did it again. Son of a gun. He's also got the only partially painted straps on his armor which is weak. 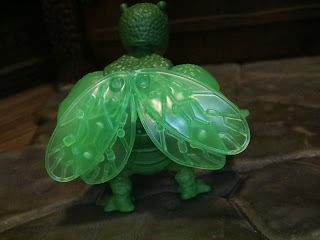 * Buzz-Off's wings are as cool as a cucumber but they were very bent in the packaging. It's probably due to them being shoved into the plastic tray but it definitely makes this guy take a bit of a hit in coolness. 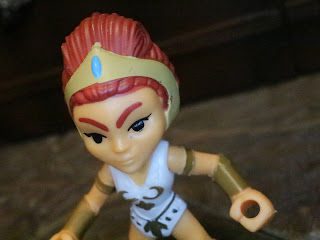 * Teela has quite a few paint applications but a few of them are quite messy. Check out the slop on the top and side of her tiara. Messy! 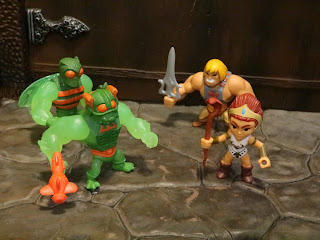 Overall, I'm giving this set a Good and a 1/2. These are definitely four pretty cool little minifigures with some cool packaging. I love the Horde Zombie variants and I really like Teela but the inclusion of yet another plain He-Man is just weak. There was no possible variant that could be thought up? There are also some little problems such as Buzz-Off's bent wings and Teela's sloppy paint but there's still fun to be had here. This is definitely an interesting set and I'm really curious as to the original intentions of it. If you know more about it let me know. Was this just always intended as a set for e-tail or was it meant to be a con exclusive before the pandemic?
If you're looking for more Buzz-Off items, check out the following: The M.U.S.C.L.E. green Buzz-Off and series 1 Buzz-Off, the Funko POP! Buzz-Off, the MOTU Eternia Minis Buzz-Off, Super7's neo-vintage Buzz-Off, and the 200x styled Buzz-Off head from the Heads of Eternia pack.
He-Man/ Prince Adam is one of my favorite characters and I've reviewed so many action figures and toys based on him that he has his own review archive. Check out Fabulous Secret Powers for an abundance of He-Man reviews!
Was Teela one of your first loves? If so, check out my reviews of many various Teela toys such as the vintage Teela, the M.U.S.C.L.E. green Teela and the standard M.O.T.U.S.C.L.E Teela, the Hot Wheels Character Cars Teela, the Mega Construx Teela from the Battle for Eternia Collection, the series 2 single packed Teela, and Teela from Battle Bones, the World's Smallest Teela, the 200x Snake Teela, the ReAction Teela (Shiva), the NECA Teela micro-bust, the Masters of the Universe Origins Teela, the neo-vintage Teela and Frozen Teela, the Tweeterhead Teela bust, an appearance in 1983's Colorforms Masters of the Universe Deluxe Play Set, and Super7's Ultimate Teela.
If you're a fan of Zodac I've also reviewed the Super7 M.U.S.C.L.E. Zodac, the Colorforms Deluxe Play Set, The Loyal Subjects Zodac Action Vinyl, the MOTU Origins Zodac, and the Mega Construx Panthor at Point Dread set which includes a Zodak minifigure.
More more reviews of Masters of the Universe Eternia Minis check these out:
Beast Man
Buzz-Off
Faker
First Appearance Trap Jaw
Golden Armor Skeletor
He-Man
He-Man (Series 2)
Horde Zombie He-Man
Jitsu
Man-At-Arms
Ram Man
Serpent Claw Man-At-Arms
Skeletor
Skeletor (Series 2)
Stinkor
Trap Jaw