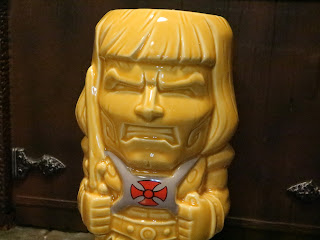 I'm really enjoying the Masters of the Universe Geeki Tikis by Beeline Creative Inc. so today I'm going to look at another one: He-Man, the most powerful man in the universe! How could you have a Masters of the Universe set of Tiki mugs and not have He-Man present, right? I've already reviewed Mer-Man and Battle Cat last week and He-Man differs from them in that he actually has a paint application on his chest. I like the attention to detail but, at the same time, there's something about it that seems to rob the rest of the design of its power. What do you think? I've never owned a Tiki mug before (I don't know that I've ever even held a Tiki mug before) so I'd love to hear some feedback from others who might be Tiki mug aficionados about these. I'm just speaking as a MOTU fan and collector. Let's take a look at He-Man after the break... 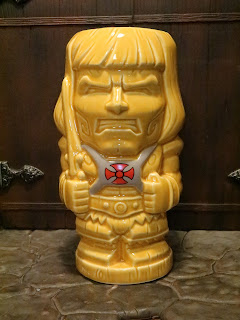 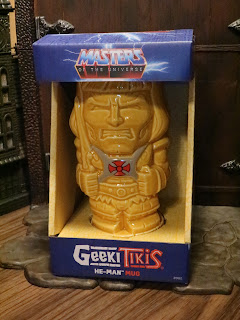 The Packaging:
* I didn't include a shot of the packaging with the other mugs so here's one for He-Man. Oddly enough, four of the mugs have an open window box while Orko and Battle Cat come in full boxes with just a picture of the mug on the front. It's weird that they're different in that way, isn't it? 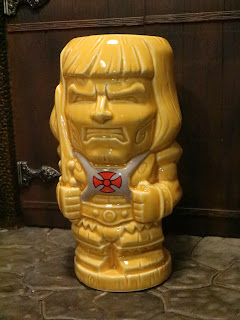 * He-Man is another nice looking mug that shows off a very stylized looking He-Man. He kind of puts me in the mind of the Eternia Minis He-Man due to the stylized nature of the design, though he clearly resembles a Tiki with the wooden details of his features.

* I like the stylized Power Sword, too. It's quite cool looking and fits in with the design brilliantly. 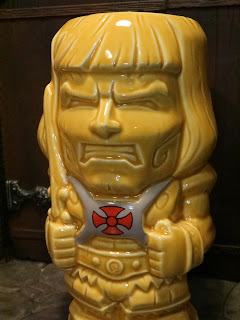 * Up close you can better se the wooden carving-like details on He-Man's cheeks and brow, plus the details you'll see in other places, too. He-Man also has his harness painted, a detail that stands out from most of the other releases. I'm not sure what I think about it, though. It looks... kind of off? I don't know. There's something that stands out about it in a way that doesn't flow with the rest of the design. 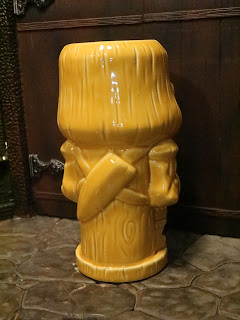 * Flip He-Man around and you can see the back of the "wood" carving as well as the sheathe for his Power Sword. 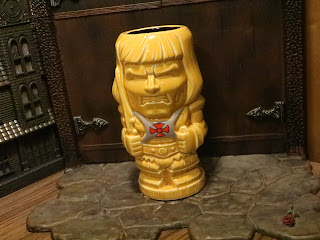 Overall I really like He-Man but there's something about the painted armor that throws off the entire design. I really think the mug would have looked better if He-Man had just not had any paint apps or just the red cross on his armor painted. Still, this is a nice Tiki mug and I doubt that even if you're like me and have over one hundred items He-Man items in your collection you still probably don't have one quite like this. He's a Good and a 1/2 item though he's not the stand out of the series. So far, that' Mer-Man. Still, would you really want a set of MOTU Tiki mugs without He-Man?

For more Masters of the Universe Geeki Tikis check out the following:
Battle Cat
Mer-Man