Action Figure Review: Man-At-Arms from Masters of the Universe by Super7 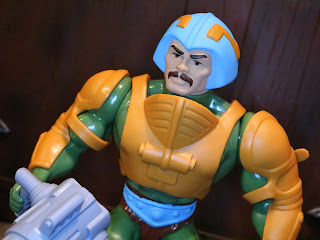 Today I'm checking out another figure from Super7's newest series of vintage styled Masters of the Universe figures and this time it's a Filmation styled version of Duncan, the Man-At-Arms to the Eternian royal family. While most of the vintage toys differed from their Filmation counterparts, Man-At-Arms always really stood out to me due to his mustache. Without the stache, the vintage toy just seems like a completely different character. Super7's current run of vintage inspired figures are all based on the Filmation cartoon (apparently a Mattel directive, as Mattel seems to be interested in doing something with the license again fairly soon) and thus have a different aesthetic from the original toyline. Seeing as Man-At-Arms is one of the core cast members from the vintage series, his presence here is very welcome. Let's check him out after the break... 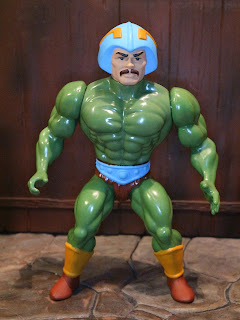 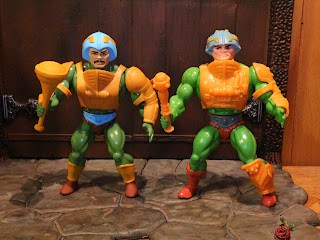 * On the left is the new Super7 Filmation inspired Man-At-Arms while the vintage Mattel Man-At-Arms is on the right. While they obviously are both Man-At-Arms in the vintage style, you can see a lot of differences. There's no way anyone with a passing familiarity with the vintage toyline should mix these two up. 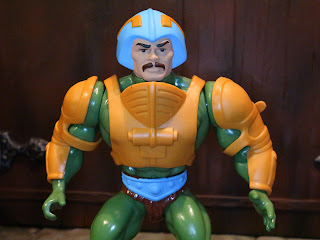 * Super7 did an admirable job of combining the design of the Filmation version of Man-At-Arms with the aesthetic of the vintage toyline. The armor looks fantastic and it's nice to finally have armor on both arms. 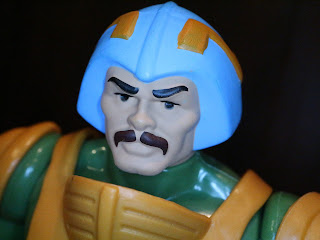 * The headsculpt is fantastic. This sculpted version of Duncan looks extremely faithful to the Filmation animation and the mustache, eyes, and helmet are all dead on. The paintwork is rather neat and clean, too. 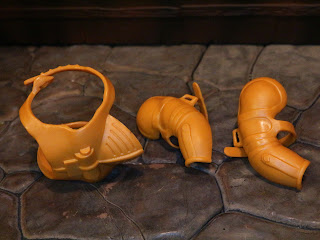 * Man-At-Arms' armor is all fully removable. It stays on well, fits the figure quite snugly, and feels to be of a rather good quality. I always felt that the armor on the vintage figure was really quite fragile so it's a nice change for this armor to feel so sturdy. 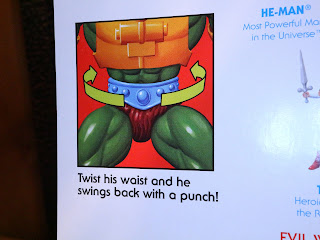 * All of Super7's neo-vintage figures feature spring loaded swivel waists. I still have no idea what sorcery causes these figures to be able to punch like this but it works pretty well. It's fun to have a genuine action feature in a MOTU figure again, allowing Duncan to punch and bludgeon, his foes with just a turn of the waist. 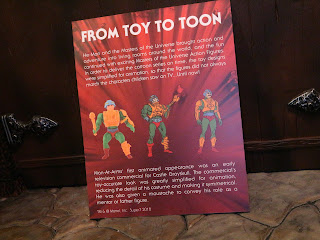 * I really am quite fond of the art cards included with these figures. They kind of mimic the look of the minicomics in the vintage packaging but they're a simple cardstock art print. On the front is a really cool image of Man-At-Arms from Emiliano Santalucia while the back features three images of the evolution of the character from toy to cartoon star. 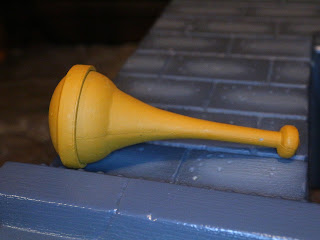 * The Filmation series simplified the weapons used by the main characters and thus we get a much simpler (though much larger) version of Duncan's mace. It's orange (just like his armor) and has a lot of heft to it. He looks pretty cool wielding it. 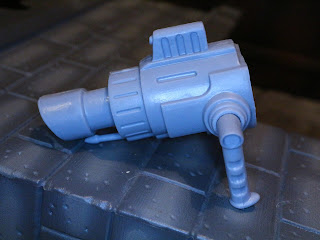 * Duncan's second accessory is the Stasis Ray from the episodes "The Dragon Invasion" and "Return of the Gryphon" that is used to "freeze" enemies in a stasis field. While the figure cannot hold it properly with one handle in each hand, it still looks really slick and can still be used one-handed. The Club Grayskull Man-At-Arms included this too, just FYI. 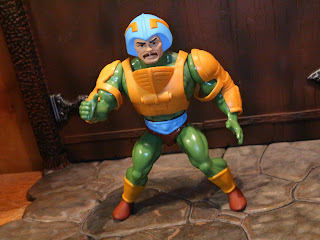 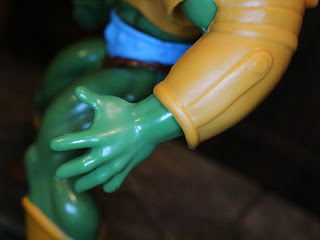 * Considering Man-At-Arms has two weapons, I really wish Super7 would have given him a left hand with a grip. I know many of the vintage figures had an open hand like this but is it really something worth preserving? 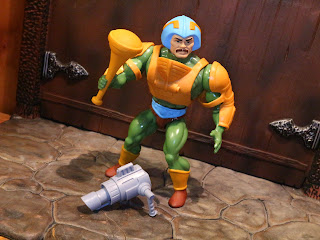 Man-At-Arms turned out quite nicely. I've still got two more figures from Series 2 to review (Teela and Robot He-Man) but I have the feeling that this will be the figure to beat. Nice accessories, excellent quality, and fantastic sculpting and paint make this a vintage styled figure well worth tracking down. He's easy to get still so grab him if you have any interest.  He's a Great figure that shouldn't disappoint.

For more Masters of the Universe figures from Super7, check out the following:
Beast Man
Possessed Skeletor