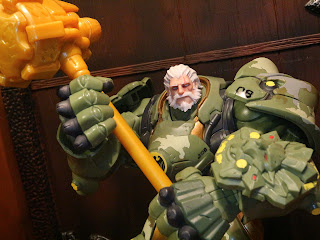 Want to know a secret? So far this year, Hasbro's Overwatch Ultmates line is one of my favorite toylines. Other than being passingly familiar with a few of the characters, prior to 2019 I hardly paid Overwatch any attention. The Overwatch Ultimates line has been one of my favorites of 2019, though, and thus I've found myself delving into the incredibly deep mythology and storyline of the series. I haven't played the game any, as I don't really like multiplayer games or team shooters, but I'm still loving the strong characters Blizzard has created. Having now read up on the game I can say with a bit of experience now that Reinhardt Wilhelm is indeed one of my favorite characters. He must be fairly popular as Hasbro released an exclusive version of him at SDCC 2019. Decked out in his camouflaged armor from his time in the German Armed Forces, this version of Reinhardt is noticeably different from his non-exclusive counterpart. While this isn't the character's signature look this definitely is the stronger of the two figures. Let's check out Reinhardt (Bundeswehr) after the break... 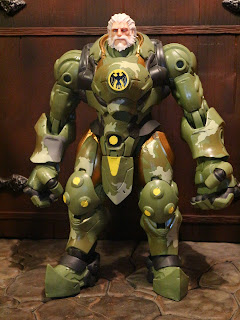 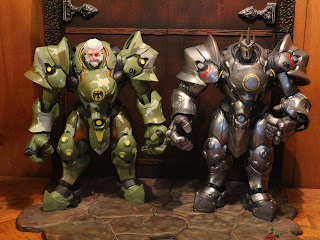 * On the left is the SDCC exclusive Reinhardt in the camouflaged armor while the standard Reinhardt is on the right. As you can see, the figures have the same basic body with radically different paintjobs and differing portraits. I'm really going to just show off the differences in the SDCC exclusive figure in this review so check out the standard figure for info on the basic sculpt and articulation. 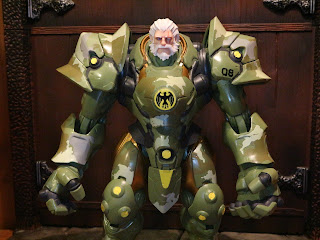 * I honestly like the look of this figure better than the original Reinhardt. I don't like the weird, opalescent plastic Hasbro sometimes uses to give figures a metallic look. The camouflage paintjob on this one version is incredible, though. It's still very vibrant, like most Overwatch color schemes, and the yellow details pop nicely. I love the eagle crest on the front of Reinhardt's chest armor, too. 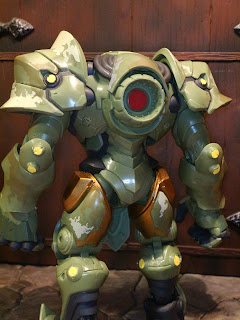 * Here's a look at the rear of the figure to show off more of the excellent paint work. I really think the various highlights on this figure show off the sculpted details much better than the standard release. Parts of the sculpt that felt softer on the standard figure look much crisper and more pronounced here. The Overwatch figures don't share parts, so repaints are probably going to be necessary to make use of the new tooling for each figure; let's hope that most of them are as interesting as this one. 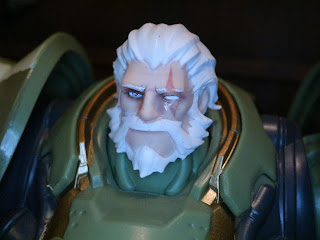 * After the new paintjob, the second biggest difference with the Bundeswehr armored Reinhardt is the presence of an unmasked portrait. Rather than an armored helmet, here we get to see Reinhardt Wilhem's snow white hair and battle scarred face. It's a great portrait that has a lot of character. It's also easily removable, so you could swap this out and put it on the standard Reinhardt figure if you want to. 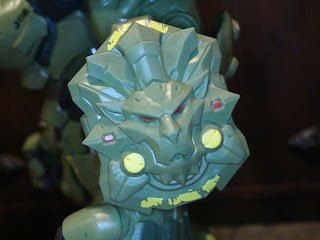 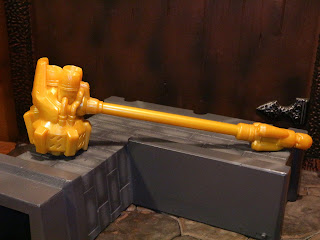 *  Reinhardt's primary weapon is a rocket hammer, a massive battle hammer with three jets on the back. It's a pretty impressive accessory that looks incredible when wielded in Reinhardt's hands. Unlike the standard figure, this version of the rocket hammer has no paint applications. I believe this is supposed to be a gold version of the weapon that is accessible in the game. It does look nice with the Bundeswehr armor, though I still like the standard hammer better. 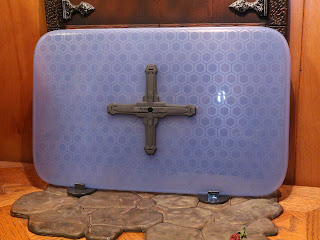 * Reinhardt's second major accessory is a giant barrier field, an energy shield that Reinhardt can project from his wrist. This thing is huge! It looks like a large Tupperware lid but it's molded in translucent purple with a great texture to give it an energy shield look. It's massive: About 8 inches tall and 13 inches wide. There are two clips included which can fit onto the bottom of the shield, allowing it to stand upright as if it has been set as a barrier. It's a cool way for the accessory to be displayed if you want to do something different with it and not have it obstructing Reinhardt on your shelf. 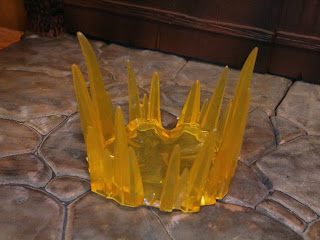 * This version of Reinhardt comes with an accessory which the standard version doesn't: An Earthshatter energy effect for Reinhardt's rocket hammer! It's a translucent yellow piece that looks like a "smash" of some sort. It's the same size as the head of Reinhardt's hammer, so the head can rest inside of it when on display. It's a great piece that really helps to make Reinhardt standout on the shelf. I love the energy effects on the Overwatch Ultimates figures! 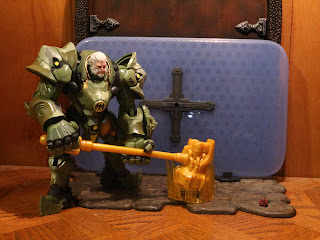 While he costs $10 dollars more than the standard Reinhardt figure (and you may not find him too far off from the retail price), the Bundeswehr armored Reinhardt is definitely the preferable version of the character. The unhelmeted head adds way more character to the figure while the camouflaged paintjob really enhances the sculpt of the figure. Add in all the accessories of the standard figure, plus the new Earthshatter energy effect, and this guy is the clear winner. Reinhardt (Bundeswehr) is a Great and a 1/2 figure that enhances the previous release. If you only pick one of the Hasbro Reinhardt figures, go with this one.

Is Reinhardt your favorite tank? If so, check out my review of the Overwatch Ultimates Reinhardt.