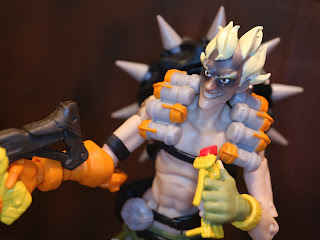 I've been working on getting things ready for this year's 31 Days of Toy Terror, so reviews are coming out a bit slower than usual! Sorry! I've actually got 6 more new Overwatch figures on hand that I haven't even gotten around to reviewing yet, as well as lots of Masters of the Universe SDCC 2019 and PowerCon 2019 exclusives. Today, though, I'm finally getting around to reviewing Junkrat, a Mad Max-inspired criminal and anarchist from Junkertown, Australia. Junkrat definitely has a very different look to him than most other figures in the line, who tend to have a futuristic, somewhat cyber-punk look to them. Junkrat looks more like he belongs in Borderlands. He is an insanely fun figure with lots of weapons. I mean lots. This guy is loaded! He's one of three new figures from the standard single packed series 2 case, so let's check him out after the break and see how he fits into the line! Hooray for new toys! 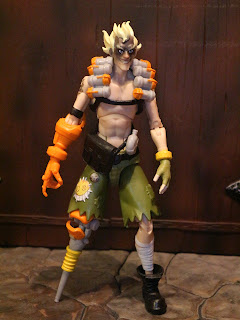 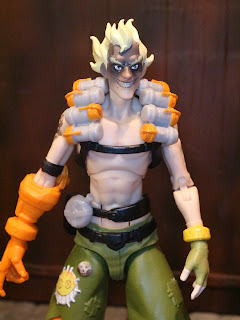 
* Hasbro has really tried to capture Overwatch's stylized, colorful aesthetic and Junkrat looks pretty good. He has less paint details than some other figures, but there's also a lot more going on with his design than with many of the other characters. He's got a separate (but non-removable) chest harness that is toting eight non-removable grenades and a non-removable belt with a pouch and a canteen. I'm not that bothered by the lack of painted details (though some collectors seem to be) thanks to the amount of detail in other areas. Personally, I think he pretty nicely resembles the in-game character. The body sculpt is excellent, showing his thin, wiry frame off. 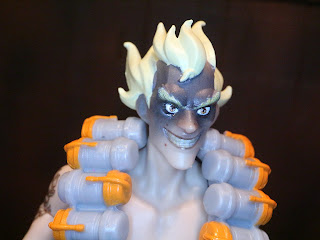 * The sculpt on Junkrat's portrait is pretty crazy. I love it! He kind of looks like a mixture of the Joker and Hades from Disney's Hercules. He's got lots of ash all over his face and some seriously crazy air. 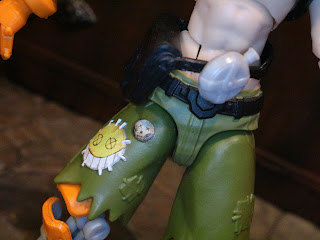 * While Junkrat may not have all of the paint applications that need to be on the figure, he does have some very nice printing on the various buttons and/or patches that adorn his shorts. The crazy smiley face and the skull bade are very nicely done, adding a lot of personality to this crazy guy! 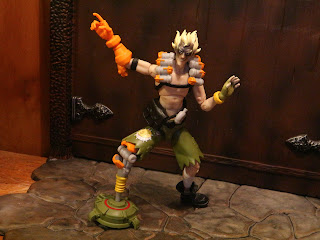 * Overall, Junkrat's articulation is good. I have a problem with the limited range of motion on his cybernetic arm, but I'll get there in a minute. For now, I'll reiterate that Junkrat is a durable, well made figure like nearly everything else Hasbro produces. He's fun to pose and play with and has a great range of motion, including lateral pectoral hinges. This guy has been one of my favorites to pick up and play with lately! I have been able to get Junkrat to stand on his own in some poses but his mine also functions as a stand, so you can pose him on it, too! 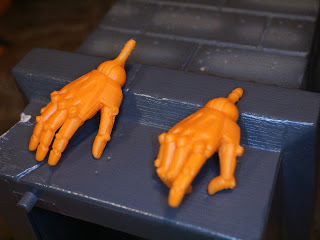 * Junkrat includes a few extra hands. For his right hand, he has a standard "relaxed" hand and a pistol grip for holding his Frag Launcher. 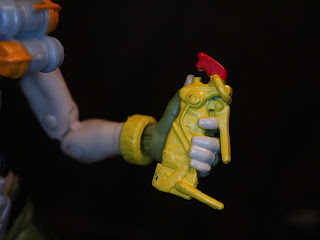 * Junkrat also has two left hands. The first one is a standard relaxed hand, which is expected, but it's the second one that is really cool: It's a hand with an attached detonator for his concussion mine. The detonator isn't removable but it looks great. It's one of those small details that just makes the overall figure so much better as it really captures an element of Junkrat's explosives loving personality! 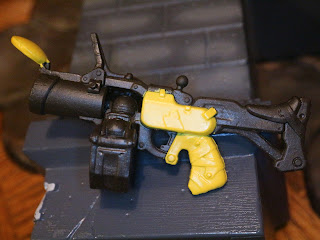 *  Junkrat's primary weapon seems to be the Frag Launcher, a multi-shot grenade launcher with a box magazine. You can even see the individual grenades coming out of the ammo box and cycling into the chamber. The sculpt is nice. Some more paint applications would be welcome but, as it stands, it's still a pretty fun piece of equipment for the figure. 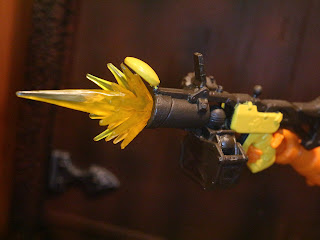 * The attachable "blast" effect adds even more fun! I love that the Overwatch Ultimates line uses the various energy effects with each figure, as it really brings the figures to life. The explosive effect simply plugs into the barrel of the Frag Launcher. It looks fantastic! 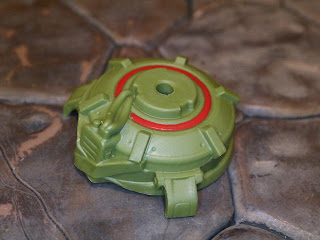 * Junkrat's concussion mine has a few cool features. One, it just looks really cool. I've always loved action figures with unconventional accessories like mines, plastic explosives, and such (remember the Mission: Impossible action figures, Tripwire from G.I. Joe, and the McFarlane Solid Snake?), so this is right up my alley. There's a sculpted detonator on it as well as a hole in the center. As mentioned above, Junkrat's peg-leg can fit in the middle so he can use it as a stand. In the game he also uses it to propel himself higher, so this is a throwback to that, too. 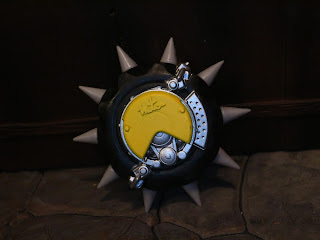 * Junkrat's last tool of mass destruction is the RIP-Tire, a spiked tire that he can hurl and remotely detonate. It's a solid piece with the spikes added on as separate (but non-removable) pieces. There's not really a way for him to hold it but it can attach to his harness so he can tote it around with him. The sculpt is fairly intricate and it's quite a sizable accessory. 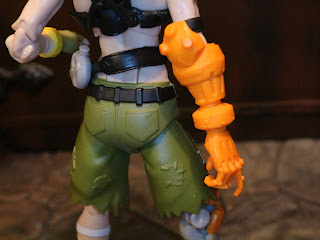 * There definitely are large spots where the figure is just a solid color of plastic, especially on the cybernetic arm and on the shorts. I woud have loved to have seen even more paint operations here, or at least a little bit of a wash on the arm. 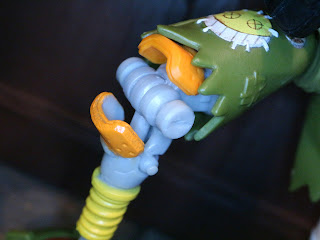 * Junkrat's peg-leg has a very tight hinge joint. That's good but be careful when you move it. You want to make sure the hinge is moving rather than pending the leg . 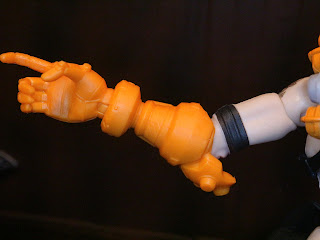 * Overall I like Junkrat's articulation, although his elbow has an extremely limited range of motion. This is about it, folks. It makes getting him in good pose with his Frag Launcher rather frustrating.


*One of Junkrat's trademarks is that his hair isn't just singed, but it's always perpetually smoldering. I'm surprised Hasbro didn't go with translucent orange hair painted over for his normal color. We didn't even get orange and black painted tips! 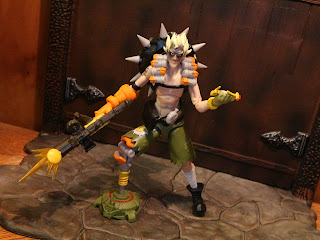 Junkrat does have some imperfections but, overall, he's one of my favorite Overwatch Ultimates figures released to date. yeah, Hasbro's figures have fewer paint applications than other Overwatch lines like Figma or Nendoroid, but they're also around 1/2 to 1/5th of the price. Hasbro is doing an awesome job with this line and it's easily become one of my favorite lines of the year. Junkrat is a fun, funky, well accessorized madman who is easily a Great and a 1/2 toy. I picked him up at HasbroPulse, but GameStop stores are also stocking him as well. He's great fun!