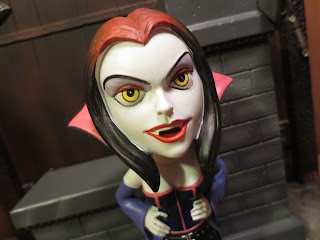 Sometimes the most terrifying combination is something both sexy and scary. Conflicted emotions can make one feel confused, lightheaded, and out of touch. Of course, blood loss can bring about those feelings, too...

Today I'm looking at another Bobble Head from Entertainment Earth's Goth Hotties set: The Goth Vampire! If you remember my review of the Goth Witch, I paid $6 for the set of four of these on a sale at Entertainment Earth back in August. The Goth Vampire is fun, freaky, and ...fanged. This doesn't feel like the sort of review that needs a lot of introduction. Ready for a closer look? Then join me after the break... 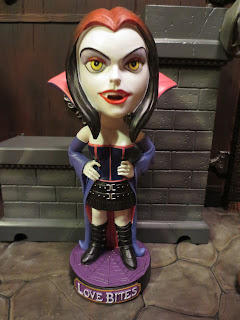 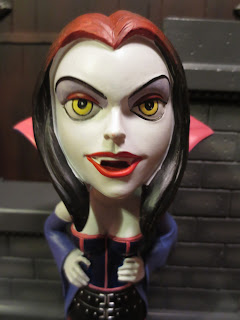 
*I really like these because they could be goths in Halloween costumes, regular people in gothic styled Halloween costumes, or real monsters in gothic clothing. I guess she could also be a vampire of Eastern Germanic descent. Anyways, she's got a trendy haircut and a cute, heart-shaped face. Her hair is black and red (I wonder which color is dyed?) but her yellow eyes really stand out! You can see she has a semi-traditional vampire collar on but it's actually attached to her neck and floats over her shoulders. 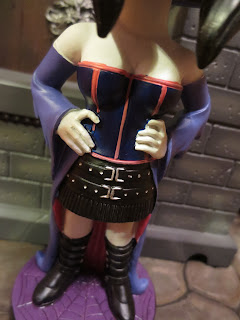 * One thing that I commented about liking on the Goth Witch is that her outfit wasn't just all black nor was it overly traditional. It was colorful and fun. I feel the same way about the Goth Vampire. She's still got a cloak, but it's a bit different. Rather than a straight black dress she's wearing a purple and pink corset and a black belted skirt. It's a cool outfit that still feels appropriately vampireish in this context and appropriately goth. 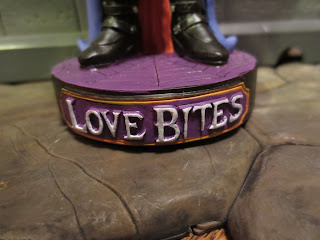 * Hey! The Goth Vampire actually has a slogan rather than just a word on her base! Her base says "Love Bites" and I'm sure that she mans that with all of her heart. And all of her teeth. If you can't tell, the little spider webs on top are actually etched in and not just painted on. 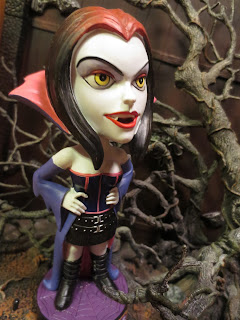 I really like these. They're not really toys or anything; they're decorative bobble heads but they definitely capture some Halloween fun in a resin figure with a spring for a head. Oh, and they look awesome bobbling. Not every bobble head actually bobbles but these figures have a great head bobbling action. They're really fun to watch! I don't like the Goth Vampire as much as I like the Goth Witch, but she's still pretty good. Considering I paid less for her than for a candy bar, I think I made out like a bandit. Overall, I'm giving her a Great rating as well. Keep checking around and you might find a steal on these as well!

The Lego: Monster Fighters Vampyre Castle
The Mighty Max Rat Trap and Vampyre set
Hordak's a Vampire kind of, right? I reviewed the MOTUC Spirit of Hordak
Dracula was a part of the Playmates Monster Force line
Mattel released a Vampire Batman
Diamond Select's  Van Helsing will help you kill all of these vampires!
Alucard from Castlevania is just Dracula spelled backwards!
Posted by Barbecue17 at 10/22/2015