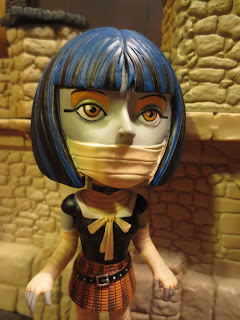 Anticipation might be one of the most potent additives to terror! Take the mummy for example. Are we really afraid of ancient bandages or are we frightened of what lies waiting underneath...

If you're keeping track, the Goth Mummy is the third bobble head figure in the Goth Hotties series that I've reviewed. I'm quite partial to mummies (not entirely sure why) and I have to admit that I really like the look of this figure. At first I was a little perplexed by the bandages over her mouth but after considering it a bit, it's actually a pretty reasonable look for a character in a costume. Like her fellow bobble head in the series, the Goth Mummy is made from resin and makes a nice little decorative knick knack for around the house. When prepping to do this review I learned something interesting about bobble heads: Did you know that the first mention of a bobble head might be in the 1842 short story "The Overcoat" by Nikolai Gogol? While mummies are far more ancient than 1842, I thought you might appreciate that little bit of trivia. Ready to check out this mummy now? Then join me after the break... 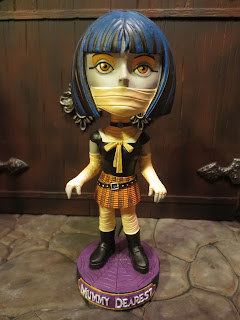 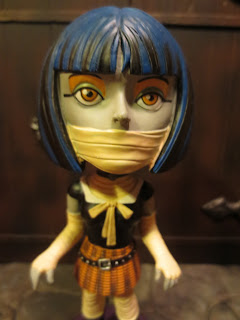 * I really do like the headsculpt and the Goth Mummy's hairstyle. It's a cute bob with black and blue highlights. What's not to love? She has a grayish green skin tone (is it make-up or is it centuries of decay?) and some awesome green and gold eye-shadow that complements her ancient Egyptian inspired eyeliner. The bandages over her mouth look breathable and complete her mummy look without forcing her to look like Boris Karloff. I'm definitely getting a Monster High vibe here, aren't you? 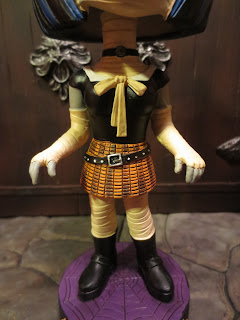 *Once again, it would have been very easy just to dress the Goth Mummy in bandages and call it a day. Fortunately, I like that Entertainment Earth got a little creative with the costumes She's wearing a seasonally appropriate outfit of a black blouse with an orange plaid skirt. The paint and sculpt is quite awesome. Furthermore, the bandages that giver her the mummy-like appearance are really accessories. I love the bow she's wearing that's made out of the same bandages as those on her arms, neck, and legs. I think the proper expression here is "Totally Dorbz!" hat's a real thing the cool kids say these days, right? 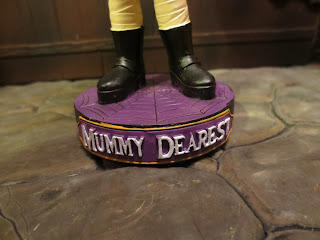 * I gotta admit, I think the Goth Mummy has another questionable slogan on her base. "Mummy Dearest?" It's not the best (I would have went with "All Wrapped Up" or "Wrapped Around My Finger" but it's not the worst. She also has a purple spiderweb base. 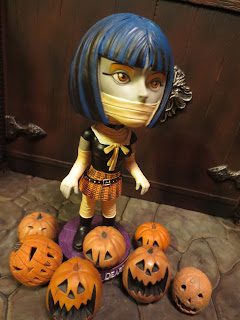 I think the Goth Mummy is my favorite so far of these Bobble Heads. She really has a great look that takes the mummy costume and does some fun things with it. Something about these reminds me a little bit of the Resurrection of Monstress figures by Yellow Submarine. While it'd be cool to see these bobble heads as true action figures, I still love their cool, collectible nature. The Goth Mummy beats out the Goth Witch in my eyes and is my favorite so far. I'm giving her a Great and a 1/2 rating. If you're looking for something fun and a little different to chill out on your shelf during the Halloween season, try scooping one of these up!
Posted by Barbecue17 at 10/23/2015