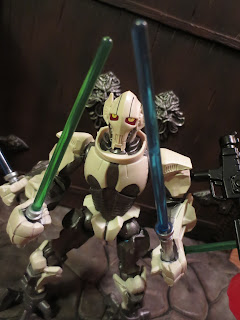 General Grievous is another character from the Star Wars prequels that looked cool enough but  who really didn't fully get a chance to shine until The Clone Wars. Grievous didn't have a story arc that added any depth to his character or anything but he did finally get a chance to appear menacing, threatening, and competent over a long period of time. Today I'm looking at General Grievous, another deluxe figure from the Star Wars Hero Mashers line. Grievous is another figure from my Force Friday haul and I'm finally getting around to reviewing him. Something that I found kind of cool is that because of the Mashers line I was given the chance to pick up a number of characters who at previous midnight events were my must haves. While everyone will still admit they wanted Darth Maul prior to Episode 1, most folks are reluctant to admit they wanted Jar Jar as well. The same goes for Grievous here: Grievous, Darth Vader, and Darth Sidious were on everyone's lists at the Episode III midnight launch. How cool that I picked all of these characters 10 years later, along with the Black Series Kylo Ren, on Force Friday! Ready for a closer look at Grievous? Then join me after the break... 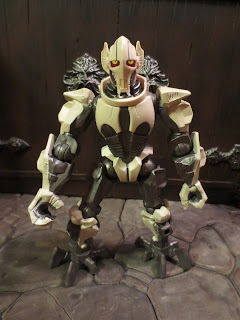 Accessories: Clip on arms, two lightabers, and a blaster. 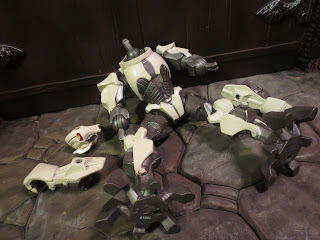 *Grievous is one of the best figures for mashing in this line. Let's be honest: Robot limbs look good on anyone! Want to give Darth Maul some cyborg legs like in Clone Wars? Do it! Does your Jar Jar need a robotic arm? Improve him! With General Grievous you have the technology! 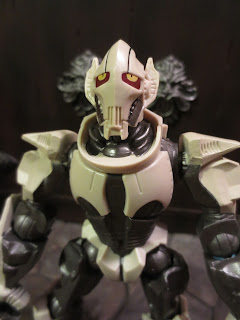 * Grievous looks awesome! He's easily one of the best sculpts in this line, if not the best. It's definitely a toss up between him and Darth Maul. He has excellent paint work, detailed sculpting that captures all of the cool intricacies of his cyborg body, and some great texture work. I'm really excited to have Grievous this early in the Mashers line but I have to say that he makes me very, very eager for Grievous' appearance in the Black Series! 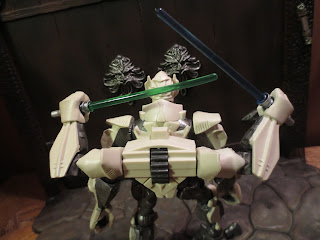 * To replicate Grievous' four armed battle mode Hasbro included a backpack piece that attaches onto the two portholes in his back (other figures can wear it, too!). It features two arms that can turn when you spin the gray groove dial on the back. The  arms are articulated and are wielding two lightsabers. The lightsabers are permanently attached to the hands but since you get two more regular lightsabers with Grievous it isn't really a problem. 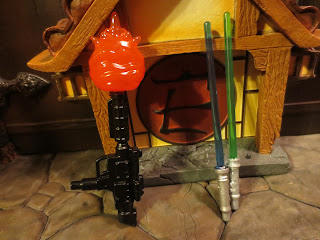 * Besides his cool two armed backpack, Grievous also comes with two lightsabers (one blue and one green) and the Annihilator blaster which ended Grievous' life. The lightsabers are cool and Grievous is really impressive when wielding all four of them. The Annihilator is a pretty fierce looking blaster as well; I love the blast effect (although I wish it were removable). 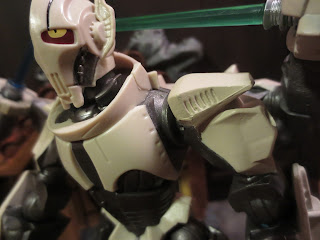 * I'll give up this song and dance when I get around to series 2 I suppose but I have to say that I'm still disappointed that these figures only have swivel shoulders. The rest of the articulation is quite nice, so it's particularly frustrating that the shoulders are so limited. On Grievous, it's an even more egregious oversight because his extra arms have swivel/ hinge shoulders. Agghh!!! 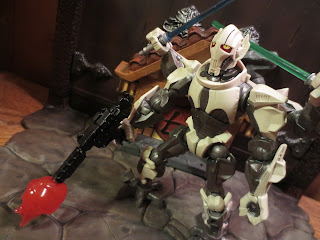 Grievous is another Great and a 1/2 figure in my book. If I were recommending three figures in the Mashers line, they would be Garazeb Orrelios, Darth Maul, and General Grievous. Grievous is just lots of fun and really has some great accessories that help him to excel. He's a deluxe Masher that really feels like he's worthy of that title.


I've reviewed a couple of other Star Wars Hero Mashers, including: