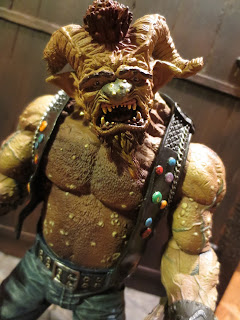 Yesterday we delved into the darkest depths of an ancient castle and visited an alchemist's experiment. Today we take to the darkened streets of some future city in search of a troll...

Today I'm looking at an example of a massive, beautifully sculpted creature loaded with accessories that should absolutely take you back to the early 2000s: Wolf Nev from WizKids' Shadowrun Duels line. A hybrid between an action figure line and the popular HeroClix gaming system utilizing the Shadowrun universe, Shadowrun Duels never found the success it was looking for. That's unfortunate because it's one of the best looking action figure lines around. While WizKids produced the line the sculpting was handled by the awesome Plan B Toys of Special Forces fame. I'm specifically looking at Wolf Nev today. He's a Troll and a gang boss and was released in the second series of figures around late 2003/ early 2004. Does a horned troll in a leather vest help you get into the Halloween spirit any? Hopefully! Let's take a closer look (but not too close!) after the break... 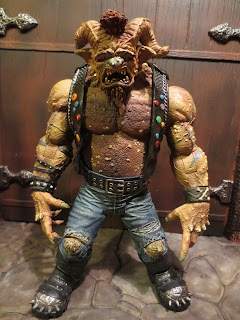 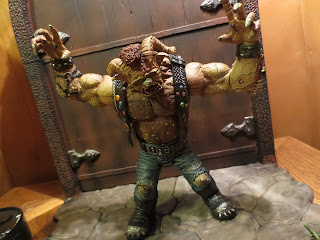 
* Wolf Nev definitely isn't super articulated by any stretch of the imagination but 2003 he's not bad. He is very sturdy, though. Many McFarlane toys (and even NECA stuff) from this same era were very brittle. Wolf Nev feels much sturdier than those. The swivel/hinge shoulders do give him a nice range of movement for hitting people, though, and I can appreciate that. 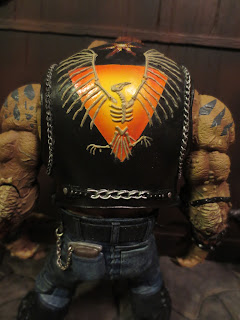 *It's tough to remove from the figure (and there's not much reason too) but Wolf Nev's jacket is awesome. Check out the awesome paint job on the bird skeleton on the back. All of the chains and bones on the back are sculpted, not just paint apps or a tampo stamp. This guy is an incredible visual feast! Oh, and how about his wallet with a chain on it? Yup, that's a real chain. That connects his wallet to his belt loop. What an incredible detail! 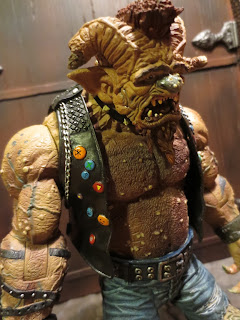 * I love the look of this guy. He looks really fearsome but also slightly pathetic. I don't know what his story is (or if he has one) but he's very well detailed and expressive. There really isn't one spot on this figure that's not detailed. His skin isn't just furry but it's also covered with what looks to be some type of blisters or boils. His massive mane runs all the way down his back under his vest. Heck, the bottom of his right book features a sculpted (and painted) dead animal that he's stepped on and is still dragging around. 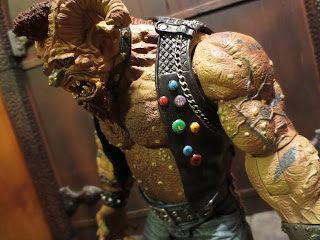 *The paint work just escalated this guy to the next level. Every little piece of flair here is unique and captures a cool design He's only wearing 15 pieces of flair, though, which is definitely the bare minimum. Seriously, do you think this is an OfficeSpace reference? Anyways, next time Mattel has to leave off someone's eyebrows for cost reasons or Hasbro decides that it's more cost effective to only paint half a figure, think of WizKids and Plan B toys and remember that we as collectors just didn't support this line that dared to paint flairs and roadkill. 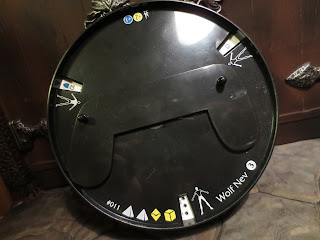 *I'm a sucker for bases and stands and this line really used them. They're part of the game mechanic for Shadowrun Duels and thus have a HeroClicx like dial system on them along with the characters name and other information. I have no idea how to play the game but I love that these bases keep the character standing and open up to store all of the accessories. Brilliant stuff! 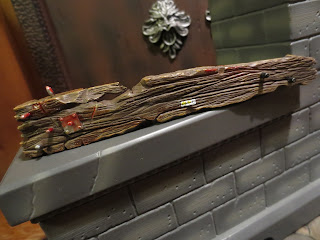 * One of the cool aspects of this line is that each accessory factors into the game that can be played with the figures. If you look closely you'll see a little box that shows you what dice you roll in the game for that accessories boost. It's neat. Of course, I'm really just glad this guy has a massive board filled with nails and covered with blood. 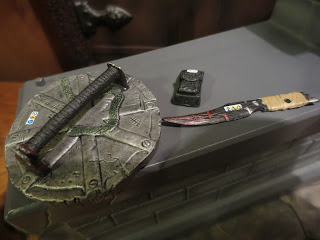 * He also comes with a shank (complete with a wrapped handle and blood stains), a trashcan lid (with fish bones and green slime), and a stim pack container. The stim pack can actually fit onto a peg on his belt in the back. 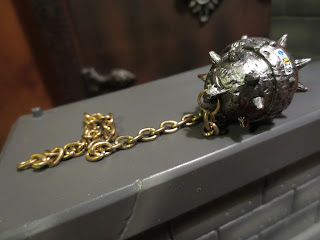 * Oh, Wolf Nev also comes with a spiked ball on a chain. He goes really well with your GoGo Yubari figure. Get these two together for some wacky adventures! The chain is actual metal and guess what the spikes on the ball are covered in? Did you say blood? You win! More bloody blood! And you didn't think this figure was fit for 31 Days of Toy Terror Returns! For shame! 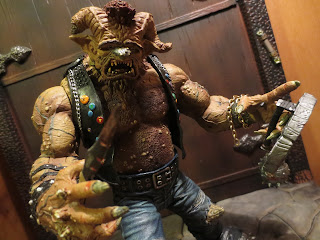 *This guy just looks awesome all kitted out with his stuff. The presence of this figure is amazing and still looks cool. This line is truly one of the best looking lines out there! 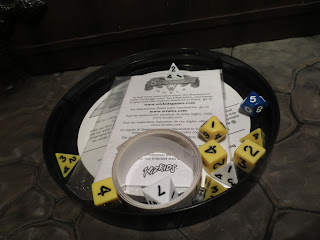 *I haven't actually played the game yet but I can say that I've used the dice for years to supplement everyone's regular dice in Dungeons and Dragons. I still use a number of the D6s and D4s for enemies and events that utilize multiple dice rolls at once. 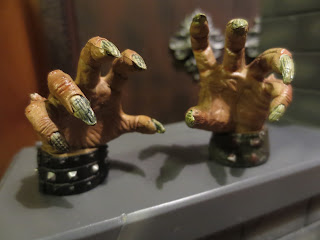 * Wolf Nev comes with two extra hands. His basic hands feature pegs on them that allow him to hold some of the included weapons more easily. One of the ideas for this series was that characters could swap gear to some extent so just making weapons fit in characters hands of a variety of sizes wasn't always feasible. Wolf Nev's hands are huge so the pegs let him more easily hold his shank. Everything else stays without the pegs, though. 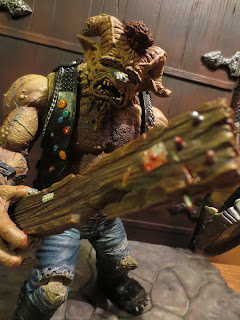 Shadowrun Duels was an impressive line that sadly never got a third series. Wolf Nev is definitely a highpoint in a line filled with exceptional figures. Each accessory is incredible and the figure itself is just amazing to look at. Every time you glance at this guy you'll see something new. I don't own many action figures of killer troll gang leaders so it's fair to saw that Wolf Nev fills a gap in my collection. While the articulation is definitely reflective of 2003/2004, everything else definitely is on par (and possibly exceeds) most of what we're getting today. This guy gets an Epic rating from me! He's not that expensive on the secondary market so look around and see if you can scrounge one up. You'll be glad you did!
Posted by Barbecue17 at 10/18/2015