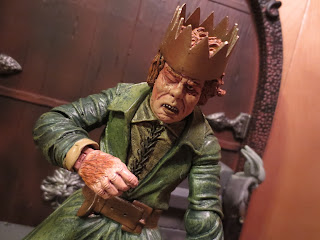 How frightful to be a peaceful, caring being burdened with a terrifying appearance. Perhaps one of the most frightening thoughts is to be labeled as something you're not...

Today I'm looking at another figure in Diamond Select's Universal Monsters Select line: Quasimodo, the titular the Hunchback of Notre Dame. Based on Victor Hugo's 1831 gothic novel, The Hunchback of Notre Dame was turned into a silent Universal film in 1923. Of course by that point it had already been captured on film on another occasion (almost 10 years earlier) and it would continue to be returned to again and again for inspiration for films and television shows. Diamond Select has been releasing some excellent figures in this series but I haven't reviewed too many on here. I'm working on that! Today, though, let's check out ol' Quasimodo himself shall we? More after the break... 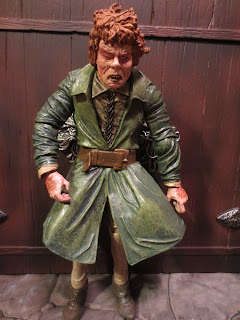 Accessories: Gargoyle base, cloak, scepter, and a crown. 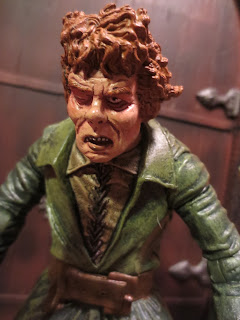 * The sculpt is absolutely amazing. It's by Jean St. Jean and it really captures Lon Chaney Sr.'s portrayal of Quasimodo perfectly. The sculpt features brilliant work and paint, particularly on the head and face. The figure has a special chunky, gobby feel to it that somehow makes me really connect it with images from the silent film. This guy would work really well with Mezco's Silent Screamers as well as he has that same look to him. 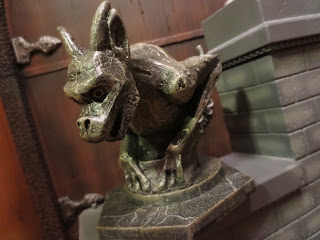 * I really like this gargoyle base. It has two pegs for Quasimodo to stand on. It's well painted to look like aging, weathered stone and really adds a lot to the figure's overall display. 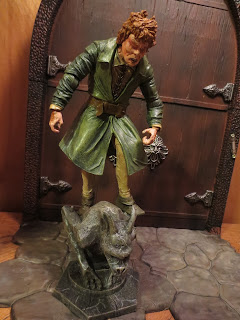 * The stands a bit tough to use (I'll deal with that in a minute) but it does allow for Quasimodo to stand with a really great pose. Put his left foot up on the footpeg on the left side and rest his right foot on the ledge on the gargoyle's back to give him a nice, solid stance. He looks just like he's peeking out over Paris, doesn't he? 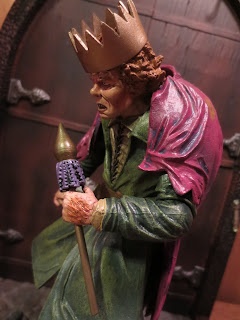 * Quasimodo comes with the robe, crown, and scepter he sports when he is crowned "King of Fools." The crown is quite soft but easily fits over Quasimodo's head. It's made from a pliable plastic that makes me think of painted cardboard. If you have an R-Truth figure, you could perhaps use this to make your own King What's Up!  The scepter and robe are both quite nice. I love the dark wash and the fleur-de-lis on the cloak itself. 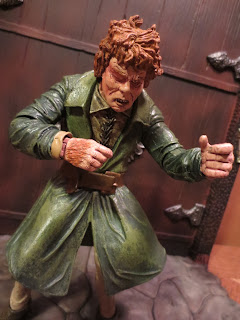 *The articulation is plentiful but quite stiff in a number of places. Quasimodo's wrists, ankles, and neck are all very tough to position. In fact, the cuffs of his pants and tunic keep the wrists and ankles from having a wider range of motion. They're actually blocking his movement. 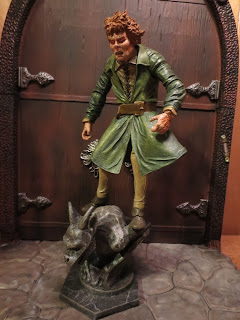 * It's very, very easy for this figure to tip over on the display base. The gargoyle just doesn't have a wide enough base to support Quasimodo if he begins to tip. Definitely don't position him high atop your shelf unless you find a way to secure the base! 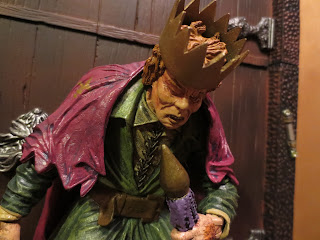 Quasimodo is an odd Universal Monster. He's not really a monster, is he? I remember getting the Quasimodo figure from The Real Ghostbusters: Monsters line as a kid and asking my dad who he was. His answer, even then, made me feel sorry for Quasimodo. He didn't need to be busted. He needed to be loved. Quasimodo isn't a monster but he's still a part of film history that led to the Universal Monsters that we always think of. Diamond Select payed a excellent tribute to Lon Chaney Sr.'s portrayal of the character and crafted a Great figure that looks excellent on display. Shop around and you'll almost definitely find a great deal!

And of course, a few of the ReAction figures:
The Invisible Man
The Mummy
The Phantom of the Opera
Posted by Barbecue17 at 10/17/2015