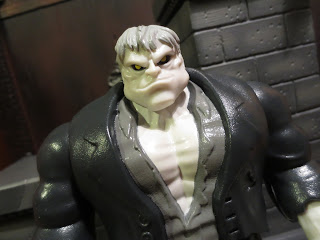 While some cities are renowned as beautiful locations for an evening stroll in the cool night air, Gotham isn't one of those places. The decent, honest people of Gotham know to get off the streets before nightfall. While muggers, murders, and maniacs roam the streets after dark, something even more sinister and terrifying lives beneath the streets....

While I love the Imaginext Collectible Figures, I don't buy too many of the basic figures sold in stores. When I do, however, it's usually because I'm tempted by a new Batman villain. It took me a few trips to the store but I finally found the single carded Target exclusive Solomon Grundy. Solomon Grundy is available by himself with his pipe accessory (the figure I'm looking at today) and also as part of a set with Batman, Blue Beetle, Ra's Al Ghul, Green Lantern, Martian Manhunter, and Harley Quinn. While Ra's Al Ghul would have been a cool figure, I didn't need the rest and I wanted Grundy's pipe accessory. Ready to take a look at the oversized Imaginext Solomon Grundy? Then join me after the break... 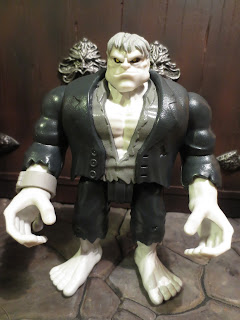 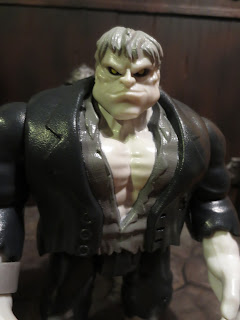 
* Grundy looks fantastic! I love his pasty white/ gray skin and the excellent headsculpt here. He looks like a bruiser while still managing to have a zombie-like appearance. The rumpled, torn suit looks fantastic and has some nice tattered details around the edges. Grundy is also pretty huge and definitely towers over standard Imaginext figures. Grundy's usually depicted as a pretty big guy, so this completely makes sense. 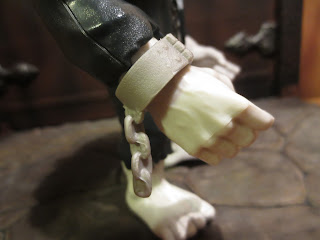 *It's a small detail but I love the plastic cuff on Solomon Grundy's wrist. It's not removable but it does slide around and rotate. 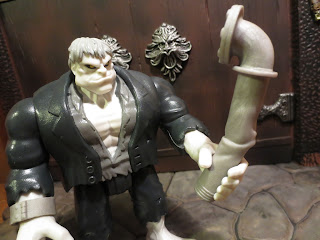 * This pipe is a nice, solid weapon for Grundy. It's huge and can easily fit in his hands. It's cast in a metallic looking gray plastic and features some threading around the bottom and some rivets and bolts on the top. Just don't make any jokes about telling Solomon Grundy to "stick it in his pipe and smoke it." He doesn't take that well. 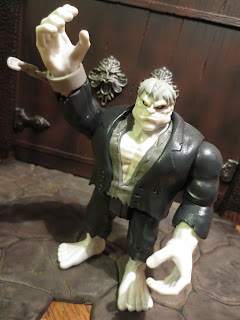 * The only thing I don't like about this figure is the articulation. While he has the same joints as you standard Imaginext figure (although his legs move independently unlike standard figures, which is nice) the action feature interferes with his arm movement. Press the button on Grundy's back and his arms dart out to the site and slam back together. The package art depicts this as Grundy smashing two characters together, which is actually pretty cool. The downside however is that Grundy's arms don't swivel 360 degrees (even less than 180) and they can't stay spread out. The action feature makes sure they always pop back into place. 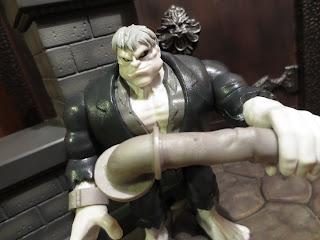 I love Imaginext stuff and Grundy is one of the best I've purchased. He's incredibly fun, nicely oversized, and features a fantastic Grundy likeness. He's a Target exclusive so unless you want to pay extra you'll do best to try and track him down there. Hopefully he's still hanging around (I bought mine back in early August and have been waiting on reviewing him so he could be part of 31 Days of Toy Terror Returns). The action feature is fun and does work well, but it also inhibits normal posing of the figure. In the end, I'm giving Grundy a Great and a 1/2. He's one of the best over-sized Imaginext figures out there.

If you need more Solomon Grundy in your life, I've also reviewed the giant Arkham City Solomon Grundy from DC Collectibles.
Posted by Barbecue17 at 10/05/2015