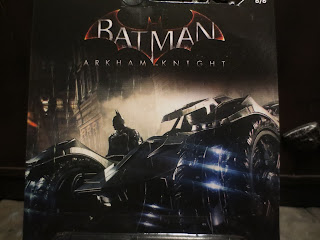 It's time for the sixth and final review of the new Wal-Mart exclusive 2015 Hot Wheels Batman series: The Batman: Arkham Knight Batmobile! This is the newest Batmobile out there (although next year we'll inevitably get the Batman Vs. Superman: Dawn of Justice Batmobile) as it's based on the 2015 video game of the same name. If you've played Arkham Knight then you know that the Batmobile plays a huge role in the game. Huge. I mean, if Batman can find any excuse to use the Batmobile in the game, he does. It's still a fun game with a great story, though, and the Batmobile design is quite good. It's kind of a hybrid between a more classic Batmobile and the Tumbler. Ready for a closer look? Then join me after the break... 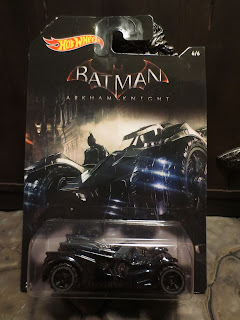 
* The packaging is awesome on this one. It shows the Batmobile on a foggy Gotham night. The lights are cutting through the fog and Batman's silhouette is visible standing behind the Batmobile. It's incredibly atmospheric and looks very well done. The Arkham Knight logo is OK (it's not one of my favorites) but it is prominently displayed centered above the image. 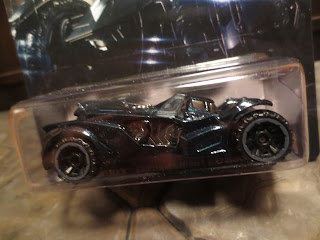 This is a nicely accurate sculpt. The only thing that's odd to me is that the Batmobile here has a metallic blue tint to it rather than being all black. I get that some of the re-releases often swao color palettes but this is a new model. Accuracy should have won out! For $1, though, this is a good model with some killer packaging. I'm giving this one a Great rating.

Besides the Batmobiles in this series that I've reviewed over the past two days, the only other Batmobile I've reviewed is the Hot Wheels: HW City The Tumbler- Camouflage Version.
Posted by Barbecue17 at 10/17/2015