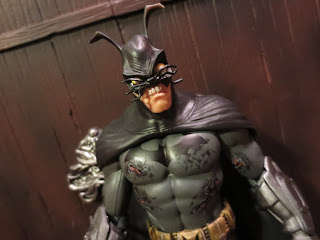 Quick!: What the most obscure Batman variant figure you own? I'm not talking some random toy; I'm talking about something that actually appeared in a game, comic, tv show, or movie. I'd have a hard time answering that as well but now my answer might just be Rabbit Hole Batman from DC Collectibles' Arkham City line. Based on a short side-quest in Arkham City where the Mad Hatter drugs Batman and uses a mind control helmet on him which causes Batman to undergo a bizarre hallucination, this figure takes one of Batman's now most well known looks (his Arkham City appearance) and alters it with a bizarre. This is Batman with some battle damage and a very bizarre rabbit appearance. Pretty odd right? This figure was released last year, a good few years after most of the Arkham City figures have come out, but DC Collectibles has continued to support the line by offering random figures here and there. Heck, this year we finally got Clayface. Ready for a closer look at Rabbit Hole Batman? Then join me after the break... 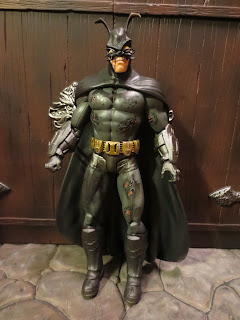 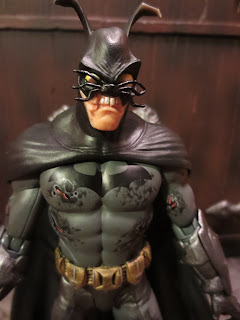 * While the excellent and detailed body sculpt is reused from the multiple Arkham City Batman variants (I own at least three: the basic Batman, Bruce unmasked, and the Detective Mode version), the head sculpt is really why you're buying this. It's utterly bizarre which works so perfectly for this figure! The scraggly, warped whiskers, the over-sized buckteeth, and the ears that would make the Noid proud definitely convey the utter strangeness of Batman's appearance during his hallucination at the hands of the Mad Hatter. 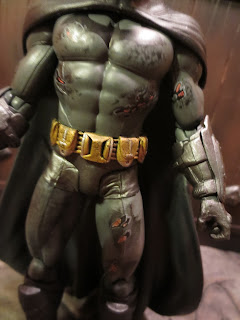 * The paint's nice and clean. Well, not clean per say but it looks great. Bruce's Batsuit is covered with damage here and the paint does an admirable job of rendering that here. Everything else is also really well done and captures the look of the game's exceptional character models. The boots and gauntlets have silver scuff marks where paint has rubbed away, the belt has silver clasps and fasteners and is covered with a dark wash to give it a realistic appearance, and the soot just has an overall grimy appearance. 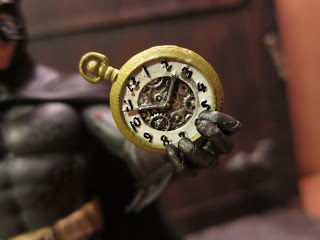 * Batman does come with an interesting accessory: An old pocket watch. He can grip it in his left hand although the Mad Hatter holds it in the game. It also resembles the giant stopwatch you battle on in "The Tea Party" side mission. The paint is pretty accurate for being such a small piece and the sculpt is incredibly impressive. The little numbers and gears are all very clear and visible. 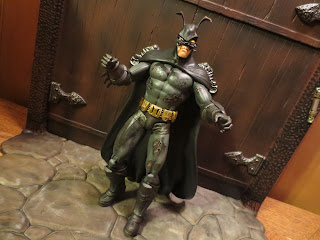 *With how much articulation many new DC Collectibles figures have these days, it's almost difficult to remember that they used to be much more limited in their poseability. Batman fears nice and solid but his legs and arms are pretty limited in motion. The head's nice but everything else just keeps him standing around. 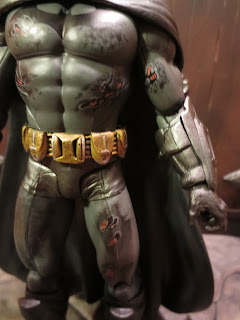 * I mentioned the quality of the paintwork above and while I don't want to take away from that, I must say that I'm a bit disappointed that all of the battle damage on this figure is just paint. There is no unique sculpting on the body. I get that this was definitely an obscure variant (probably created simply so  the Arkham City Two-Face didn't have to ship by himself) but a little extra work would have went a long way. 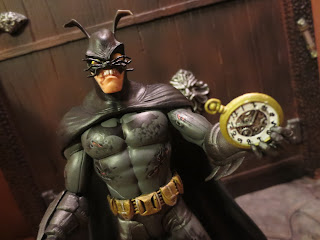 If you collected the Arkham City line, it's possible that you've bought almost this same figure a few times now. This is a crazy obscure variant and while it's not something anyone needs for their collection, it is kind of fun. I waited until I found one on a great clearance sale through Big Bad Toy Store so you might want to look there or shop around as well. I'm giving this guy a Good and a 1/2. He's fun but not for everyone.

I've reviewed a few other Arkham City figures on here, including:

I've also reviewed figures from two of the other Arkham games: