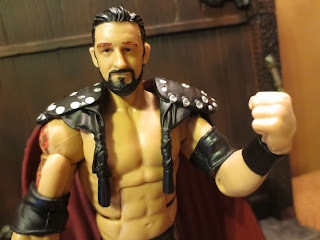 Don't worry! Nothing's wrong! It's just that today I have a review of Bad News Barrett from Mattel's WWE Elite Collection for your reading pleasure. Hope you're cool with that! While he seems to be doing lots of mid-carding and pre-shows lately, for awhile Bad News Barrett was flying pretty high. Well, I guess he did compete in the 3rd most anticipated SummerSlam match, didn't he? This figure was released as part of the WWE Elite series 34 and came out earlier this year. He's starting to get a bit tougher to find, though, and I figured I'd better pick him up while he was still available on store shelves. Ready for a closer look at Bad News Barrett? Then join me after the break... 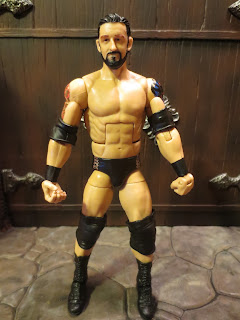 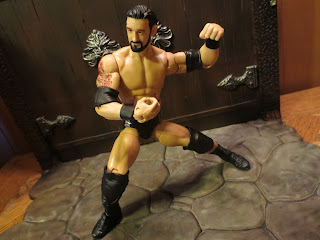 * Ready for a Bull Hammer? You can definitely pull one off with this figure. The WWE Elite figures are sturdy, well articulated, and just plain fun. I really love playing with these guys. They're definitely some of the best action figures on the market today in terms of just being fun toys. Only Star Wars Black and Masters of the Universe Classics compares. 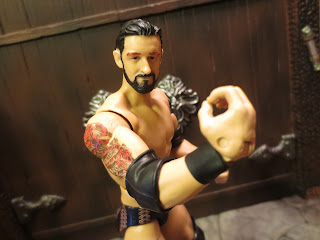 *This isn't a perfect Wade Barrett headsculpt but it's not bad, either. He's got a bit of a smirk going on, which works, and his nose is crookedly accurate. I really like how Mattel uses these soft knee and elbow pads on some of the figures. They not only conceal joints but also look pretty cool and don't hinder the articulation much at all. 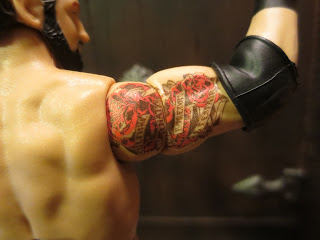 * Mattel really goes all out on the tattoos the WWE Superstars and Divas are wearing. Check out Barrett's right shoulder and bicep: You can actually read the words "Culture, Alienation, Boredom, & Despair" on there. Those are lyrics from the song "Little Baby Nothing" by Manic Street Preachers and Mattel actually made sure to capture each and every letter. Pretty cool stuff. 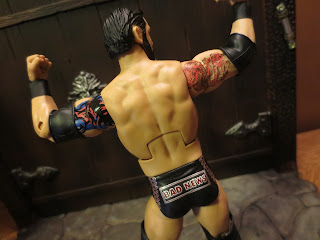 * Barrett also has a cool tribal design on his left deltoid and bicep. His trunks are accurate and feature the appropriate lined pattern and "Bad News" across the bottom. 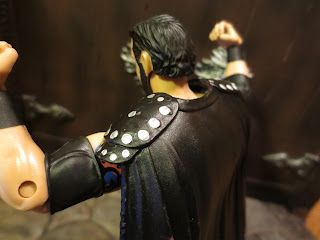 I'm afraid I've got some more bad news for you!

It's Barrett's cape. It's just not that great. It fits over his shoulders just fine, but those uneven silver dots on the shoulders? Those are supposed to be the rivets on this cape. I think Mattel really struck out on the cape here.  Oh, and why not throw in the Intercontinental Championship belt with him? He's held it five times. 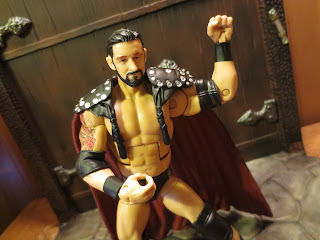 While I imagine we'll end up seeing a King Barrett figure sometime later next year (I personally want a King What's Up version of R-Truth) this is still a worthwhile buy if you like Wade Barrett. He's a great heel and an intimidating wrestler who has a great ring presence. He's a lot more interesting than many other folks the WWE pushes. This is a Good and a 1/2 figure and well worth picking up if you're collecting these.


I've reviewed plenty of other WWE Elite figures, including: