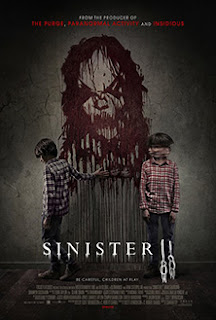 Movie Thoughts by Barbecue17
The movie I watched: Sinister 2
It was directed by: Ciaran Foy
It was released in: 2015

Please briefly summarize the plot: Bughuul is back! In this sequel to the 2012 film Deputy So & So (James Ransone) is now a private investigator who spends most of his time investigating the strands of murders attributed to Bughuul. In the wake of the death of the Oswalt family, Deputy So & So is now striving to intervene in the case of the Collins family, a mother (Shannyn Sossamon) who is trying to keep her twin sons Dylan and Zach away from their abusive father. Unfortunately, has Courtney has fled to a home next to site of a previous Bughuul murder and thus the entity's former  victims are actively seeking to corrupt the minds of her two young boys to continue their nightmarish tributes to Bughuul.


How is this film culturally/ historically significant?: Sinister did well in theaters and was quite well received, so it makes that it would get a sequel. While Sinister 2 isn't as scary as the first film, it does expand on the mythology created by the first film quite a bit. It also addresses the topic of domestic violence.


What genre would you place this film in? Horror/ Paranormal/ Babylonian Deities

How did this film make you feel: Sinister 2 certainly isn't as terrifying as the first film but it still manages to be rather unsettling. There are a few jump scares early on but most of the horror comes from the increasingly graphic and disturbing Super 8 murder tapes. We're not necessarily talking Saw or Hostel levels of depravity, but knowing that kids are committing the depicted killings definitely seems more twisted in some way.

What were the most impactful moments of the film? Interestingly, some of the most frightening scenes in the movie have to do less with Bughuul and his creepy ghost kids and more with the struggle that Courtney Collins faces in keeping herself and her children safe from her abusive husband. He's a controlling, manipulative abuser who holds a lot of power in the small county she resides in and he's almost as frightening as Bughuul (and possibly as deadly). The videos are also once again the high point of the film, particularly the "Christmas Morning" video. Holy crap that's some dark stuff.

With what other movies would you compare this film? The way that the possessed children play a more significant role in the plot definitely reminded me of Children of the Corn. The setting kind of does, too. A with the first film, there are shades of Insidious, The Omen, and The Ring. Oh, and you might also think of The Sixth Sense a few times.

What stands out about this film? All of the Super 8 reels capturing the kids murders, the creepy setting, the likable chemistry between Deputy So & So and Courtney, a creepy radio broadcast that the Professor Jonas replacement plays for Deputy So & So, and the setting of the abandoned church next to the Collins' home. There's also a great scene where Courtney's abusive husband gets what he deserves. That's satisfying.

What message do you believe the filmmaker was trying to convey? Whether film, music, or images, all art contains a message of some sort. What if that message was a message of pure evil? Also, the murders in these films seem to only happen to families with more than one child, so either don't have kids or keep it to one child per family. Also, if you're an abusive husband or father, people may actively cheer your death.