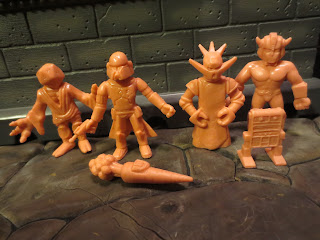 A couple of years ago I reviewed the first series of S.U.C.K.L.E. minifigures (Simply Unimportant Kitschy Little Eyesores) and now, after a very successful Kickstarter campaign by DKE Toys, I'm finally getting a chance to check out the newest series: Revenge of S.U.C.K.L.E. (Sorry Unfulfilled Collector Keep Losing Everything)! Based on the popular range of action figure/ toy hybrids from the Sucklord of Suckadelic, S.U.C.K.L.E.s are a fun minifigure series in the spirit of M.U.S.C.L.E. and O.M.F.G.! In fact, they're sculpted by master sculptor George Gaspar of October Toys. The Kickstarter had a number of different backer levels but I went for the level that got me 42 figures (actually 44 because there were some bonus series 1 figures thrown in) for $45 dollars. That's a steal when it comes to minifigures like this! This was a great project filled with unique and fun figures and I'm excited to finally be showing these off. Ready for a look at Revenge of S.U.C.K.L.E.? Then join me after the break... 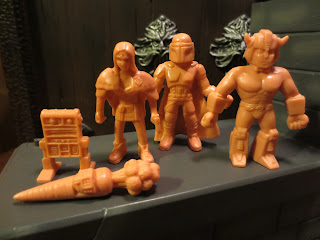 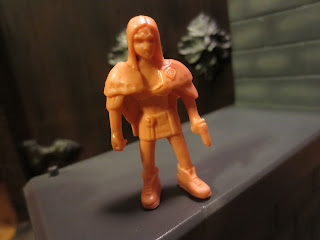 Mary Paper$ is a villain in the Suckadelic universe who is apparently both fly and ruthless. Notice the little emblem on the left side of her tattered cloak? It looks like the Cobra logo. I think that gives us a glimpse into her character. She also has a half mas of some kind to cover her face. She's also packing heat, so don't be a jerk around her. 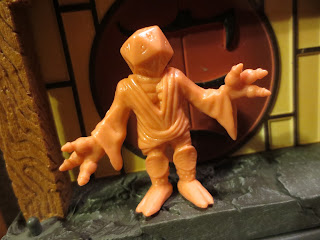 Chronos terrorizes humanity by...messing up their schedules and wasting their time. He has a bizarre alien body (his fingers kind of look like penises) and a D20 for a head. Yup. This guy must be really into D&D. Fortunately (or perhaps unfortunately for others) the 20 is showing on top. Does that mean he's about to critically waste our time? I love how visible the numbers are on the die! 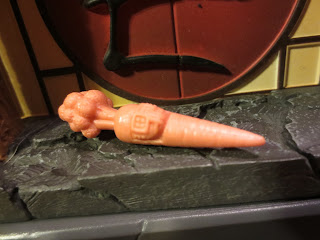 Also known as the Six Dollar Produce Man, the Bionic Carrot was a regular carrot that was modified with some old calculator parts. Now he's more than a carrot! He doesn't stand, but what carrot does? 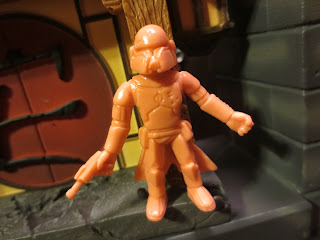 This version of the Sucklord is tricked out in some Republic styled armor, kind of like the ARC troopers with some additional Mandalorian influence. He's also armed for making shady deals in the mean streets of the Chinatown bootleg toy district. 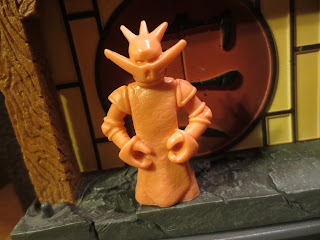 The Star Chump (real name Steve) kind of reminds me of Emperor Zurg from Toy Story. Apparently this guy is much worse, though, as he's incompetent, annoying, and ruins everything. He's wearing some nifty space armor and a nice robe but underneath it all is just a poser who drops the ball. He looks fearsome but is full of crap, basically. 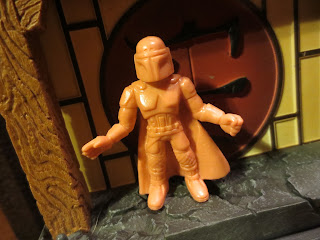 Clad in a Boba Fett helmet, Stormtrooper armor, some comfortable looking pants, and a trendy cape, Sucklord 75 looks like he might just be ready for a night out at a swanky toy expo. Or he can be an ever present reminder that you suck for buying his toys. Your call. 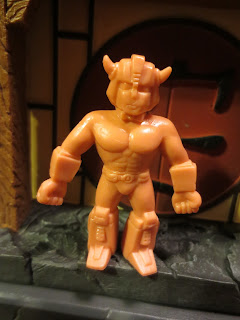 
He's a transformer with a human  body. Well, partially. He does have robot feet and hands and a robot head. He's wearing some skimpy undershorts and a bow-tie, too.  I guess he's an entertainer of some kind as he looks dressed to make an impression. 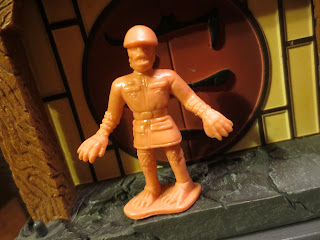 A mixture between the Creature from the Black Lagoon and a Star Wars Hoth outfit, this figure presents the Creature as another solider who has seen some terrible things but who has largely been forgotten by the rest of the world. Is this a profound statement or a kitschy mash-up? Art is in the eye of the beholder, after all. 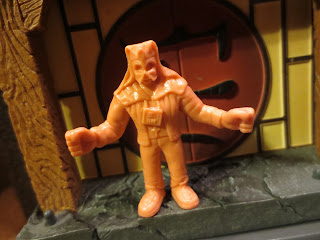 I don't know much about the mysterious Crystal Pharaoh except that he has a great eye for fashion. Is that Darth Vader's chest box hanging around his neck? Genius! And his pose? Pure M.U.S.C.L.E.! 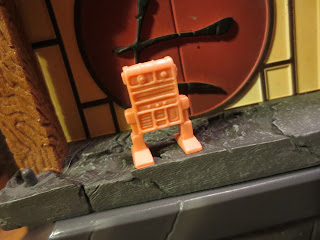 I was really excited for the Douchebot as he is clearly based off of the robot from the old Galaxy Laser Team minifigure sets that were kind of a rip off of Star Wars, Buck Rogers, Battlestar Galactica, and other 70s/ early 80s sci-fi. I had these when I was a kid and it's kind of meta to see a Suckadelic bootleg of a bootleg Star Wars toy! 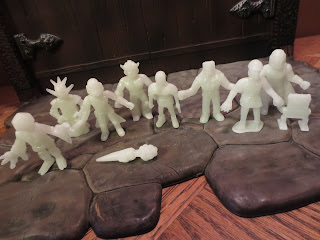 All ten of the basic Series 2/ Revenge of S.U.C.K.L.E. figures are also included molded in glow in the dark plastic. The details are tougher to make out but these have a really, really strong glow. I have a clear plastic tube near my bed that I keep glow in the dark minifigures in and I'm excited to add these guys into the mix! 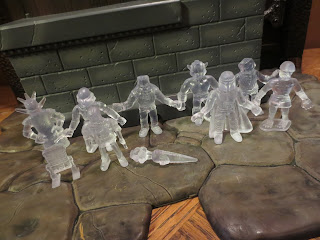 There is also a set of the basic 10 figures in translucent plastic. The details on the sculpts are very easy to make out with these and the plastic is extremely clear. These really look fantastic! 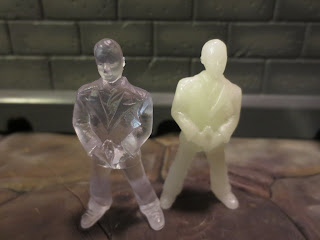 This guy isn't listed in any of the Kickstarter material that I could find so he was a real surprise! It's a rare, unmasked look at the Sucklord without his helmet on. What a classy figure this is! Don't get any smudges on it. 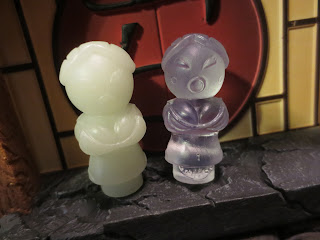 Blowpeg combines together those old peg styled little people many of us played with as toddlers, Princess Leia in her slave outfit, and a blow-up doll. Make of that what you will. This is the most random, insane mash-up ever. 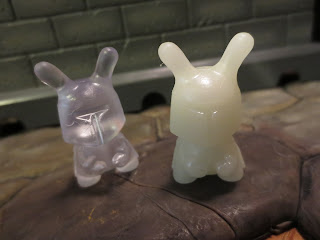 It's the Sucklord as the ultimate bootleg toy!
Not much else to say here except that this is a fun little guy. 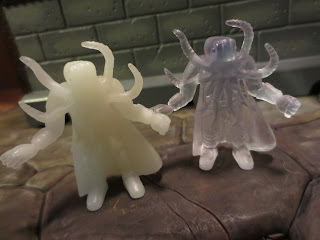 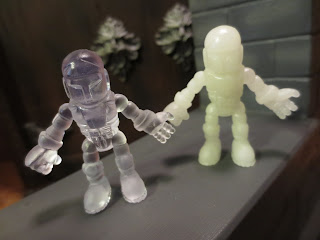 Here's the Sucklord as he might appear in the popular Glyos toy range by Onell Designs. He looks multi jointed and extremely playable. Fear not, however: This toy is a simple piece of unarticulated crap. Still fun, though. 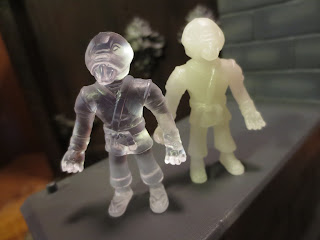 Take the Galactic Jerkbag's head and put it on the Karate Chump's body and what do you get? This figure! It's collaboration and synergy and all that nonsense in motion, baby! 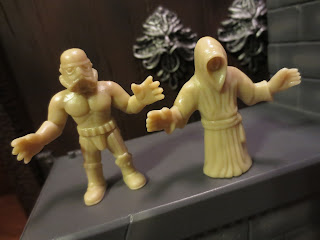 As an additional bonus some figures molded in a odd color now referred to as "Puke" were added to each shipment. Apparently the factory messed up the colors but offered them to the Sucklord at a low price. Can you ever really have enough minifigures? The answer is no. 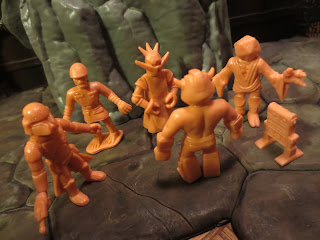 This set is amazing. Anytime I can get 44 minifigures for $45 bucks, I'm in. I'm all in. This set features yet more unique and creative characters in some great colors. The figures are very high quality as well and really manage to capture the look and feel of the vintage M.U.S.C.L.E. line almost perfectly. Because of how much value is here and how much fun these are, I feel content in giving the Sucklord the special rating of Epi-Crap! These are definitely an Epic buy, even though they're cheap pieces of crap. They're awesome crap, though. And I suck for buying them.

Check out my review of Series 1 + Kickstarter Exclusives if you missed it!

If you like the sculpting on these, check out more work from October Toys as well: