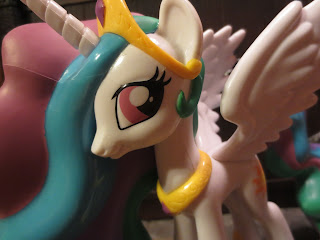 A few weeks ago I mentioned that I had made a trade with someone over at Funko Fantatic for the regular Princess Celestia. Each of the figures in this series also ships in a crystal/ glitter variant which is very desirable to some collectors (those variants are rarer) but not to someone like me who just wants the figures to resemble the characters. I ordered her from Amazon and got a crystal variant. Rather than return her to the third party seller, I just arranged a trade. Now I have a Princess Celestia! Like so many other figures in this series, Celestia was offered as a pre-exclusive through Hot Topic. Unlike many other figures in the line, though, Celestia has become pretty difficult to find. Reader for a closer look at this royal ruler? Then join me after the break... 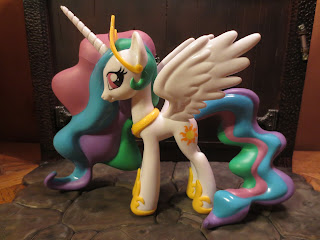 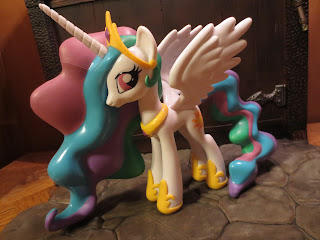 * I love that Funko is being very size conscious with this line. While most of the basic ponies are similar in size, Celestia and Princess Luna are appropriately larger, as is Discord. The Cutie Mark Crusaders and Spike are also much smaller. Celestia does look impressive when displayed alongside the other characters in this line. 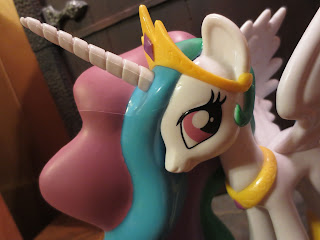 * Celestia does have a nice, accurate sculpt. Her head is very doe like which I think works to convey her graceful nature. The tiara is a separate piece and coupled with her alicorn horn definitely gives her a very royal appearance. 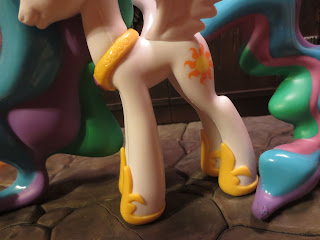 * One thing that's very cool about the sculpt is that Celestia's boots (horse shoes?) and necklace are separate additions on the figure. This really gives her a more elegant and impressive appearance. Since these bodies are often reused for other characters it further helps distinguish her form others with the similar slim, tall body type. 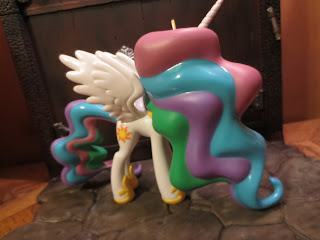 *When it comes to display Princess Celestia, your only options is to face her left side forward. Because of the hair covering her face she just doesn't look right any other way. This isn't a huge problem but since I have everyone facing forward on my shelf, I'm having to do some rearranging. 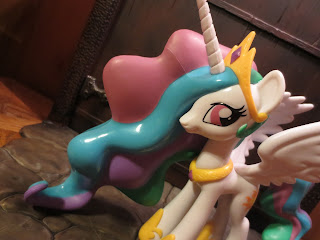 * My biggest complaint about this figure is that she's constructed very differently from the other ponies in the line; instead of being made of sturdy vinyl, she's made from hollow plastic. While I have these on display, I do let my little two-year old (who is absolutely a pegasister) play with them some. Unfortunately, because Celestia is hollow and feels much more fragile, she's is barred from playtime. I think Funko did this to accommodate her elaborate wings and tail but I've heard a number of reports of breakage on these parts, so be careful! 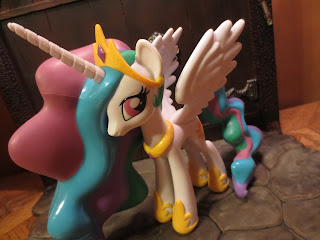 Celestia look excellent. While you can only display her one way, I don't that that's really a huge problem. If she were crafted differently the appearance of her hair would have suffered. I don't like how fragile she feels, though. I guess it's because she has so many parts and Funko either had to keep costs down or they were concerned that the weight of the vinyl for her wings, tail, and hair would cause too many problems. Still, unless your actively playing with these, you won't have any trouble. I'm giving her a Good and a 1/2, all things considered.

I've reviewed a number of other figures in this line, including: