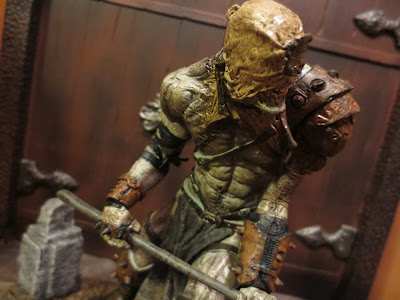 Don't you ever laugh as the hearse goes by, for you may be the next to die..." goes the terrifying old song about death and the grave.

*Edit* Thanks to eagle-eyed reader Mark Patraw for pointing out that my version of Grave Digger 2 is actually a "Censored Version" variant designed to be sold at mass retail stores. Heck, his name is actually different. Mark wrote: I thought that you might be interested to know that you have the "censored" version of Gravedigger II (which was sold as just "The Digger"). The "real" one has a cross on the tombstone base and a pair of withered arms reaching up out of the earth. Apparently, Todd had to censor some of these to get them into some retail outlets. For example, the mass market version of Zombie Spawn II, from the same series, has a different, less-skeletal, face sculpt and is missing several human skull accessories, and Lotus Angel Warrior II has an additional ornate collar/necklace thing covering her cleavage (which actually made the figure look better, in my opinion; plus, in her case, you're getting more plastic for your money, while, on the other hand, you're getting screwed out of stuff, and a poorer value, with the neutered versions of Gravedigger and Zombie Spawn)."

Other than the comics included with the figures in the first series of figures, I've never read a Spawn comic. All of my knowledge of Spawn was gathered through the film, the toyline, and ToyFare magazine. I think that was probably true for a number of collectors, though, as I knew plenty of folks who just loved collecting the toys but never touched the comic books. That's OK though, as many of the Spawn characters never actually appeared in the comics. Take Grave Digger The Digger here from Spawn Series 28: Regenerated. Released in October 2005, this figure is an updated version of the original Grave Digger who appeared in Spawn Series 8 back in 1997. As far as I'm aware, this guy doesn't have any backstory or character bio and has never appeared in the comics; he's just a creepy dude.  I've never been a huge Spawn collector (I was more into Movie Maniacs and McFarlane's Monsters) but I picked this guy up on a clearance sale back in 2007 and he's been chilling out in my horror collection ever since. Ready for a closer look at the Grave Digger? Then join me after the break... 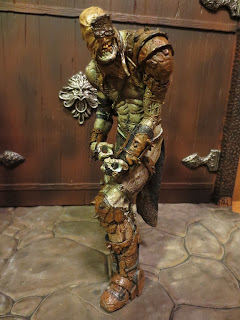 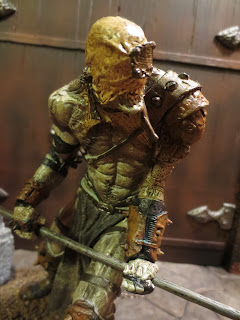 * I've always liked the design of the Grave Digger character. I own the original figure as well and love the idea of a zombieish, emaciated undead caretaker for a graveyard. The design of the character definitely seems like something you would see in a horror video game such as Silent Hill, House of the Dead or one of the later Resident Evil games. 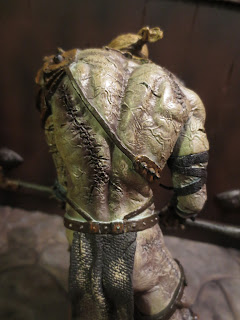 * The paint work is wonderfully gruesome as McFarlane handles all of the various scars, gashes, and grime on the Grave Digger's torso. The various bits of clothing and armor on Grave Digger also accurately reflect the look and appearance of various materials. His armor looks rusty while his hood looks stained and weathered. 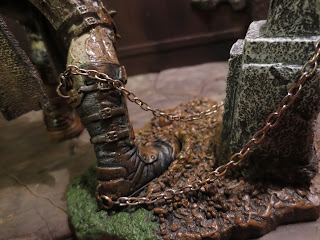 *I'm not sure of the significance of the piece but Grave Digger comes with an actual metal chain that is hooked to the heel and top of his right boot. It's durable, appropriately weathered, and does fit over the headstone on his base. 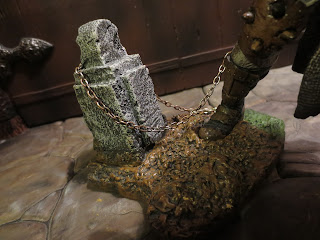 * I'm always a sucker for a nice stand or base for an action figure and Grave Digger's is rather cool. It's a headstone that is beginning to slope in the mucky, muddy ground of some ancient cemetery. The weathering effect on the headstone itself is nice and the paintwork on the grassy portions are well done. It really is needed to keep Grave Digger standing, so don't neglect it. 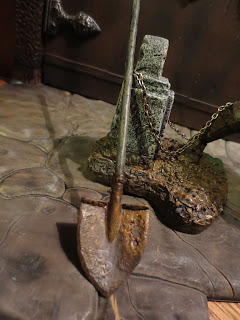 * Since he's the Grave Digger, Grave Digger needed to come with something with which he can practice his trade. That's why he has an old rusty shovel! The blade of the shovel has definitely seen better days, as rust is eating away at it, but it still seems like it has a few digs left in it. The blade separates from the handle so that it can be placed in Grave Digger's hands. 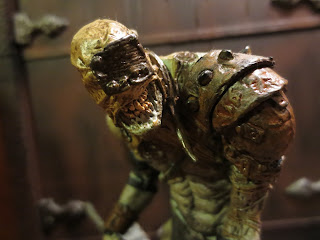 * Check out that headsculpt! McFarlane was rarely ever subtle with their Spawn toys but they sure did some find, gruesome work. I love how the teeth are exposed by the skin that has deteriorated. Icky! 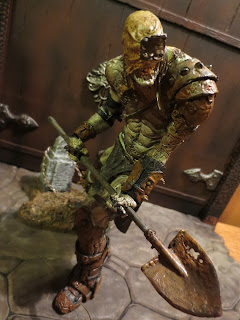 
* Sometime in the early 2000's, after releasing some very well articulated figures, McFarlane began truly moving towards releasing barely articulated ministatues. Grave Digger actually has a bit of articulation but it's pretty much useless. All of the swivel joints simply allow you to get the pose just right. The joints don't allow you to change expressions or poses: They simply allow you to get the pose right. Seems kind of worthless to add them, then, since they really don't functionally add anything to the toy. One of the problems this guy has is that he does tend to lean 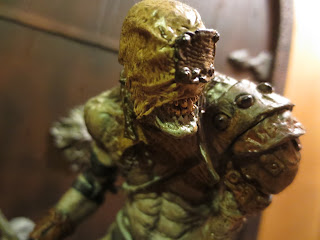 For most of the 2000's (and until the end of the Spawn line in 2008) McFarlane excelled in making exceptional ministatues or staction figures. Some collectors can appreciate these and others can. I do enjoy them from time to time and thus can appreciate the presence that Grave Digger 2 adds to a shelf of action figures. He's a spooky, well crafted "figure" that showcases many of McFarlane's strengths. Unfortunately, the fact that he has articulation seems odd. You can't really do anything with him. He's a Good 1/2 figure from late in the Spawn series but he's definitely not for everyone.