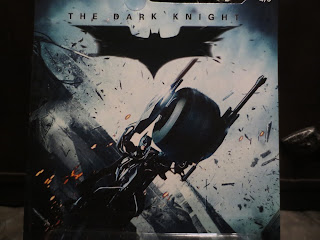 Let's be honest: The Bat-Pod is much cooler than any Batcycle. When it first appeared in The Dark Knight it absolutely blew my mind. There have been a number of various versions of the Bat-Pod released but the nice thing about this one is that it should cost you less than $1. This is the fourth in Hot Wheel's 2015 Wal-Mart exclusive Batman series of vehicles and while it's a re-release of a mold that has been around since 2009, it's still a cool little item. Ready for a closer look? Then join me after the break... 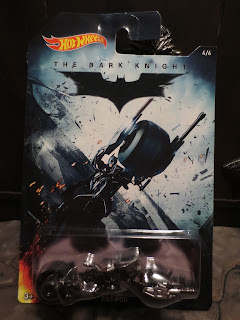 *I love the packaging art here. It's dynamic, it shows off the vehicle, and it features the amazing color scheme and logo of The Dark Knight.  This is some beautiful packaging for an 84 cent item! 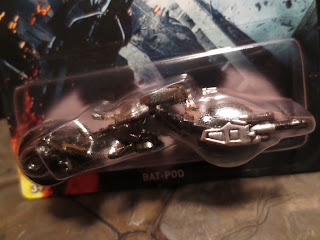 The Bat-Pod definitely is not in scale with the other Batmobiless from Hot Wheels. Heck, it's actually larger than the Tumbler. Still, it looks pretty cool. Some versions of this have come with a small Batman figure riding on the Bat-Pod but I think it looks fine without it, too. Kind of nice and model like; get enough Hot Wheels Batmobiles and you can pretend that you're Bruce Wayne. This is nicely sculpted and painted and definitely earns a Great and a 1/2 from me, the extra 1/2 coming from the killer packaging art.