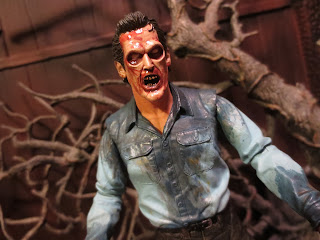 While something lurking in the woods might be a terrifying thought, something lurking inside your own body is even more frightening. What would you do if you were possessed by an ancient and powerful evil force? Would you be strong enough to fight it off or would you succumb to it's horrific will...

Over the years many companies have released toys bearing the chiseled visage of Bruce Campbell as Ash Williams. McFarlane, Sideshow, Palisades, and Funko have all released figures of Ash, but who has done the best work? NECA, baby! While McFarlane got around to crafting Ash in the 6-7 inch scale first, NECA upped the game and has released some amazing toys from both Army of Darkness and Evil Dead II: Dead by Dawn. While NECA's first Army of Darkness figures appeared under their Cult Classics and Reel Toys banners, in 2012 they finally gave Evil Dead II it's own line. It was small (only four figures and an SDCC exclusive repaint) but it gave us some truly excellent figures. I've reviewed two figures from this line in years past and now it's time for another one to make an appearance. Let's take a closer look at Deadite Ash after the break... 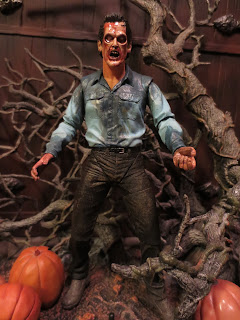 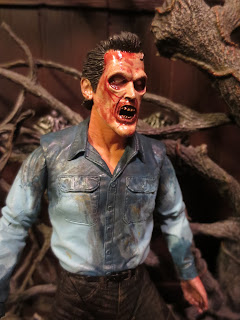 * The sculpt is quite impressive and really captures the detailed and demented makeup work in the film that showed Ash temporarily turned into one of the deadites. He's really, really creepy and the sunken, hollow eyes are amazing. While much of the sculpt is shared with the "Farewell to Arms" Ash (now the only basic Evil Dead 2 figure I haven't reviewed) it makes perfect sense here. He outfit is captured perfectly. I love the detail NECA put into the smallest aspects such as the stitches on the pockets and the material texture of Ash's slacks. 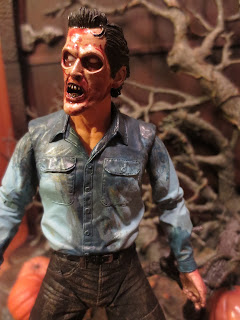 * Ash becomes a Deadite early in the film, shortly before sunrise, and ends up being thrown through the woods into a large puddle. One of the most impressive things that NECA captured was making Ash's outfit actually look wet. Check out the damp looking stains all down the front of his shirt (and on the back, too)! This really looks like a mixture of water, sweat, and grime covering his clothes. The headsculpt is nicely painted as well and features a great bloody, raw look. 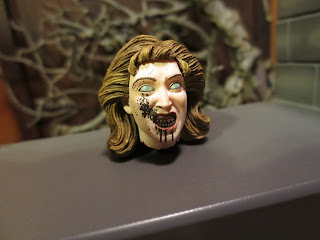 * Deadite Ash is cool but the accessories are what really sell this figure. The first accessory is absolutely one of the most gruesome and crazy awesome horror accessories I've ever seen: Linda's possessed head. Yup, after having to decapitate his possessed girlfriend with a shove, Ash continues to get harassed by her. This is a really well done accessory that features the creepy, milky white eyes and unidentifiable liquid running from the mouth that many of the deadites seem to possess. 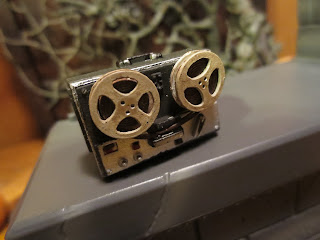 * The second cool accessory is Professor Knowby's tape recorder. This is the tape recorder that features the audio recordings from the professor that end up causing many of the problems Ash encounters. It is amazingly rendered! Who doesn't want an old reel to reel tape recorder accessory? Every side of this piece is insanely detailed and looks impressive. 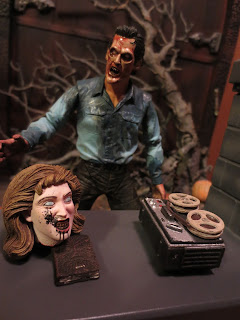 * I really love the accessories in this figure. It makes me wish more companies took the time to include movie props and other goodies in with their friends. Little things like this can cause me to decide to buy a figure that I otherwise might not have even been planning to pick up. 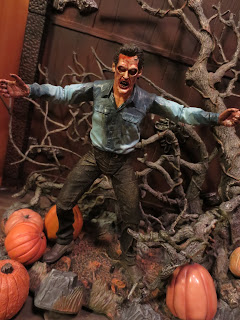 *The Evil Dead 2 line kind of feels like a mid-point between NECA's older style of static articulation (think of their Cult Classics and Reel Toys based lines) and their newer well articulated figures (think Predator, Aliens, and Rocky). The arms and torso are pretty good (maybe lacking some range of motion in places like the elbows) but the decision to give Ash a V-crotch is just bizarre. I didn't even realize V-crotches existed anymore. 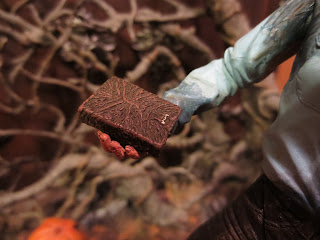 * It's awesome that we get the Necronomicon, but man is it tiny! I guess Professor Knowby waited around and ended up with the paperback version rather than the original hardback version or something. 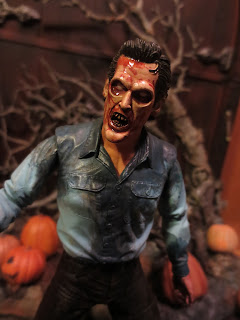 Deadite Ash is a really, really cool figure. Ash is always a fun character and NECA kind of surprised everyone by making a Deadite version. He's a nice looking figure with some great accessories. He's not the best action figure in terms of articulation but I doubt most collectors are sitting around playing with this guy anyways. He's an excellent and terrifying addition to any horror collection that really stands out. He's a Great figure, particularly due to the cool accessories he has. I'd love to see NECA release some more Evil Dead figures. Not only could they really do some great work on the original film and revisit Army of Darkness but they could also release some stuff from the upcoming TV series and 2013's Evil Dead, too. That film had some horrific deadite designs that would make truly gruesome toys!

Besides Henrietta and Hero Ash from this same line, I've also reviewed the S-Mart Ash from Cult Classics.
Posted by Barbecue17 at 10/08/2015