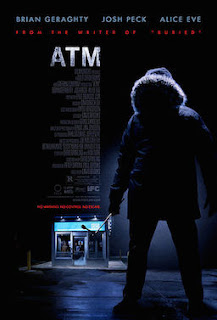 Movie Thoughts by Barbecue17
The movie I watched: ATM
It was directed by: David Brooks
It was released in: 2012

Please briefly summarize the plot: On the way home from an office Christmas party, three coworkers from a financial company (Brian Geraghty, Alice Eve, and Josh Peck) find themselves trapped inside of an ATM booth by a mysterious hooded stranger. As the temperature drops and the hour grows later, desperation sets in as the stranger shows that, whatever it is he wants, he's willing to kill to get it.


How is this film culturally/ historically significant?: Umm....It really isn't. There's not too much about this movie that really stands out. It does sort of address the financial crisis of the late 2000's in passing, but the movie never really goes anywhere with this.


What genre would you place this film in? Thriller/ Trapped/ Slasher

How did this film make you feel: Frustrated. Typically in movies, you have characters doing something really dumb (to further the plot) or incredibly brilliant beyond normal logic (also to further the plot and show how awesome the character is. You're more likely to see the brilliant stuff in action and sci-fi movies while the dumber behaviors happen in horror movies or thrillers. It's OK when a character does something stupid, though: People always do dumb things in real life. ATM, however, features the trio of characters stuck in the ATM booth constantly making poor decisions. I'm talking they are making poor decision after poor decision to the point that the characters feel like they are artificially being trapped in the ATM booth. While the film is tense at a few points, the longer it runs the more frustrating it becomes as the characters do almost nothing to improve their situations. The drama ends up feeling lazy and manufactured due to the characters' lack of coherent decision making.

What were the most impactful moments of the film? The plot is set up nicely as a series of seemingly innocuous decisions ends up leading the characters into the trap. The character of the hooded stranger also proves to be rather effective. Leaving his motives and identity mysterious really helps to add some tension, as we not only don't know anything about the stranger but we don't eve know if the main characters are intentional or random victims. The last third of the film really ramps up the tension and begins to show some true desperation set in.

With what other movies would you compare this film? The first movie I thought of was Phone Booth, but there are plenty of other films in this similar genre such as Panic Room, Assault on Precinct 13, and You're Next. There are actually quite a few things in this movie that really reminded me of You're Next, although You're Next is a much, much, much more entertaining film.

What stands out about this film? The plot and setting are intriguing and seem to have a lot of promise. The mysterious hooded stranger also is an effective film villain. Unfortunately, a week script and poor character decisions by those trapped really lessens the impact of the film. The ending is also pretty ridiculous and unsatisfying with little to no resolution.

What message do you believe the filmmaker was trying to convey? Do not patronize businesses that only accept cash (a personal rule of mine), don't be the third wheel, always carry your cell phone, and don't park as far away as humanly possible from an ATM machine.