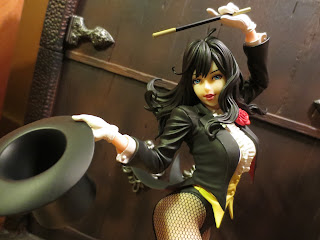 2015 has been a great year of Kotobukiya's DC Comics Bishoujo line! We got the excellent Batwoman earlier this year, Black Canary is slated for November, and Zatanna has just been released. I'm thrilled to finally have Zatanna join the ranks of this line. As one of the most powerful sorceresses in the DC Universe, Zatanna is a major character who can absolutely be counted on when the chips are down and things are getting weird. While she's currently a member of the Justice League Dark, she's been affiliated with the main Justice League in the past as well as with a number of magical groups and orders. Ready for a better look at Zatanna, Mistress of Magic? Then join me....kaerb eht retfa! 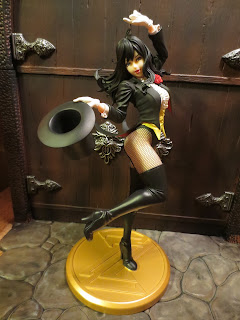 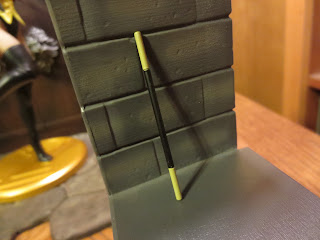 *This seems like an odd thing to start the review with, but I wanted to point out that Zatanna comes with her wand. It's very easy to overlook in the package! It fits nice and snug in her left hand and I've left it in for pretty much every picture here. Why would you pose her without it? Still, making it a separate piece definitely helps to keep it from getting bent in shipping, so props to Kotobukiya. 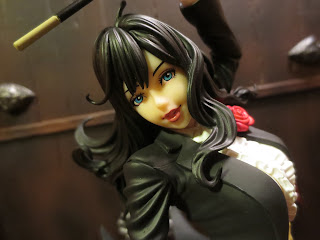 * Is there a Kotobukiya Bishoujo figure that is anything but drop dead gorgeous? Zatanna is beautiful! She has a wonderful expression that captures her mysterious charm, confidence, and showmanship! Her tux is quite well sculpted; I love the ruffled vest, the bright yellow cummerbund, and the carnation boutonnière on her left lapel. 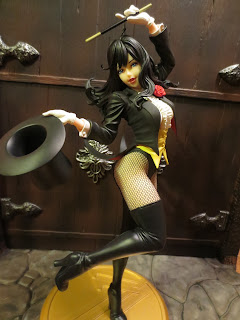 * The pose and overall design of the statue is excellent! Based on an illustration by Shunya Yamashita, Zatanna looks as if she is on stage performing her act. If you've never had the pleasure of seeing one of these statues up close, you should know that they're made from a mixture of high quality plastics that give them beautiful colors and make them feel very durable while being light and easily moved around. I really prefer these to statues that cost many, many times more. They're just so wonderfully crafted! 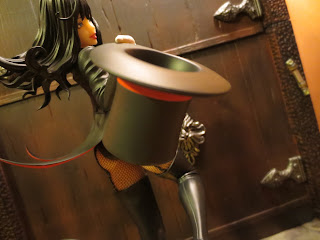 * I love the top hat that Zatanna is carrying in her right hand. She's holding it by the brim and tilting it just a bit as if she's getting ready to make something appear from within. The hat is actually hollow so if you wanted to out something in there, you definitely could. 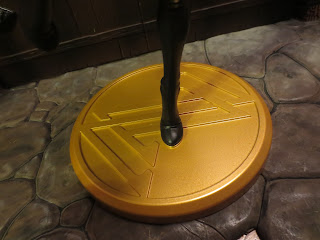 * Zatanna certainly doesn't have the most elaborate base in the Bishoujo line but, like Batwoman and Power Girl, she has a simple base that is personalized. Rather than having her name on the gold base Zatanna has two "Zs" formed into a logo. Why two Zs? Because her full name is Zatanna Zatara of course? She's permanently attached to the base which I appreciate. 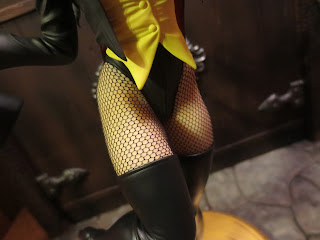 *As far as I am aware, this is the first Kotobukiya statue to actually be wearing real fishnets. Black Canary was announced a couple of years ago but was inexplicably put on hold until November of this year, and the word on the street has been that Kotobukiya couldn't get the fishnets right. Well, it seems like they've figured it out because these are great. They're proportionate, well made, and look fantastic! 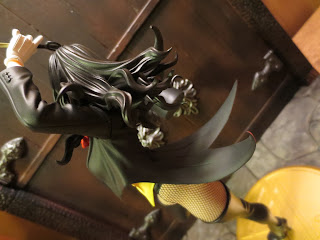 * One of the things I like about all of Kotobukiya's statues is that they have a wonderful sense of motion. With her right leg up, the tails of her coat swaying out, and her hair lifting up a bit above her back and shoulders, Zatanna really seems as if she is in the middle of her act and about to perform a big finale. What's going to come out of the hat? Like an audience waiting in anticipation to see what happens next, a statue that conveys movement well keeps the viewer intrigued. Kotobukiya nails this every time when they adapt Yamashita's illustrations. 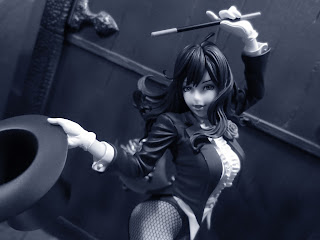 * Nothing! I know that seems like a common thing when I review the Kotobukiya statues but they're so well made and perfectly designed that I can't come up with anything that I see as a negative. It would have been cool if a rabbit or something came with the figure that could be placed in and removed from Zatanna's top hat, but that's just a wild idea. 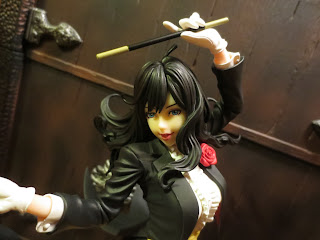 I can't think of a single time that I've been disappointed by Kotobukiya's work on this line! The paint work, the colors, the sculpting, the detail, the poses, and the quality are always perfect. Zatanna doesn't surprise me at all: She's as fine as everything else that has come out in this line! When a statue looks this great and comes out so perfectly, there's really only one rating I can give it. In honor of Zatanna, I'll give this statue a Cipe rating! (That's Epic spelled backwards if you're not familiar with Zatanna's method of invoking her magical powers, you muggle you!). 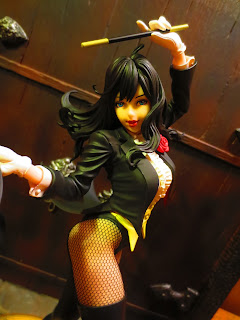 I own quite a few of these, but I've only reviewed two of them:
Armored Wonder Woman
Batwoman

I am always on the lookout for the Kotobukiya Bishoujo Supergirl and Catwoman. If you're ever planning on parting with one and want to sell one or arrange a trade, check out my trading post!
Posted by Barbecue17 at 10/14/2015