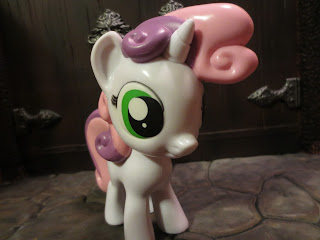 Yesterday me and my assistant, my two-year old daughter Alamena Diane Pie (ADP) decided to review the Cutie Mark Crusaders from Funko's My Little Pony Vinyl Collectibles line. These are available from Hot Topic currently as a pre-exclusive, which means they will pop up in other stores in the future. We've already reviewed Scootaloo and Apple Bloom so now it's on to Sweetie Belle, Rarity's younger sister and the third member of the Cutie Mark Crusaders. While ADP is a big fan of Scootaloo and Apple Bloom, she's never gravitated to Sweetie Belle. Granted, she's two, so why she gravitates to what she gravitates to is often a mystery. Anyways, here's our look at Scootaloo... 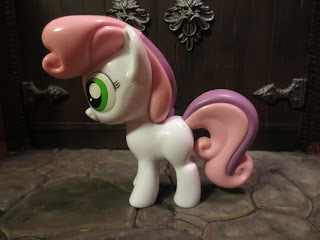 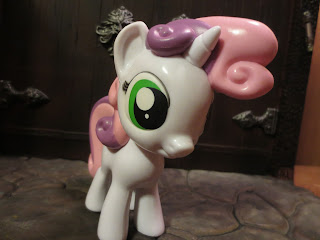 Here is a transcript of our review session. Most quotes, unless otherwise noted, are attributed to ADP: 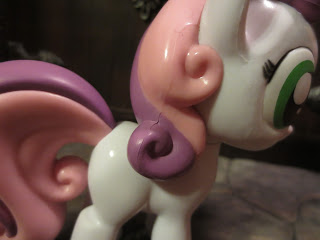 *I Point out some of the more unsightly molding lines to my two-year old.* "Daddy different!" *Now ADP rocks Sweetie Belle in her arms. She then asks to see something Halloween.* "Feebeebell (x3)"  *My wife walks in and is excited that ADP can now identify Sweetie Belle. It's now dinner time and ADP has to leave. She leaves Sweetie Belle and takes her stuffed Woodstock with her. 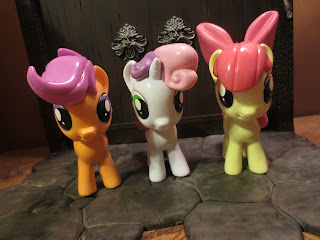 I love the Cutie Mark Crusaders as a whole but Sweetie Belle just doesn't register with me as much as the other two do. If you're going to pick one up, you'll probably end up wanting them all since they're a trio. She's not bad, just not as exciting as the rest of the crew. I'd give her a Good which is a solid average rating. ADP, what do you think?

Thanks to my very special assistant for helping me out with these reviews!

I've reviewed some other MLP vinyls, including: