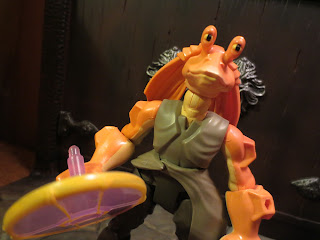 It is 2015 and I purchased a Jar Jar Binks action figure on Force Friday. I'm not sure what that says about me or about Hasbro, but I'll be honest: I find it quite hilarious and nostalgic. I really do enjoy the prequels for the most part, but as a ninth grader who loved Star Wars when Episode 1 first came out, it really did take me some time to warm up to that film. Jar Jar was (and still is for me) a very polarizing characters. There are at least 100 things I love about Episode 1 (seriously, I made a list for a friend one time) but Jar Jar still does grate on my nerves. Of course, once again I think the Clone Wars TV series really salvaged him as a character. For me, Jar Jar has become almost like an embarrassing memory that is now shared and, in some ways, celebrated among friends. I was really interested in the Mashers line and I didn't even realize Jar Jar was in it until I was in the second store I hit up on Force Friday. When I found him I felt the need to run through the toy section of the Wal-Mart I was at yelling "I found the only Jar Jar! I got him" to everyone sifting through the Black Series and 1/18th scale figures. It elicited a few laughs, so it was totally worth it. Anyways, that's my long story for starting a Jar Jar Binks review. Read on after the break... 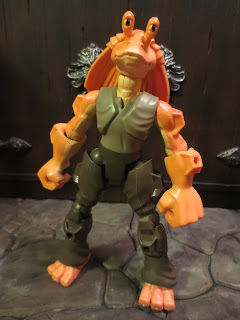 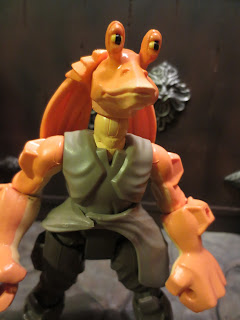 
* Says a whats yousa wants, but a Jar Jar no is a bad looking characters meesa thinks. While his a characters mights a bein' a bit on the poodoo side he's a still moy moy nice a looking design. Ooh! He's a wearin a little skirt of some kind. It's a capable of being removed, okey day? His color and paint works is a being moy impressive, too. 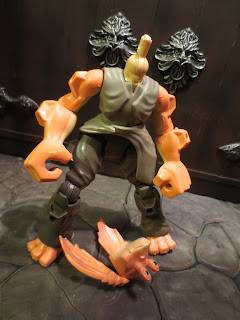 * Aieeee!!!!! Whatsa wrong? Whysa I spakeing like this? Mooey mooey bombad!!! Anyhoos, this Jar Jar figure is a muy mobile and can goesa here or goesa here. Anyways, hesa here. Or hesa be in deep doo-doo. 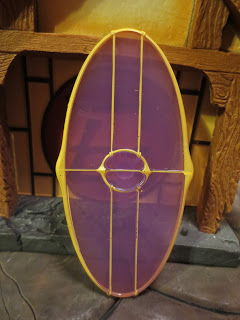 * The Gungans have a grand army and Jar Jar has a shield so hes a can be helping the Captain Tarpals fight off the terrible tings that be coming in the maxi big roamers. It's a muy seethroughey with a holdy handle and a post so Jar Jar cansa wear it. 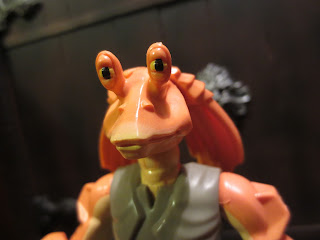 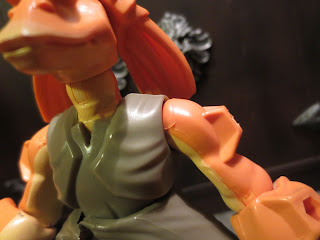 * Whysa Jar Jar no bein able to movie his shoulders anyway but in a swivel? Swivel/ hinge joint does be allowin him to have better luck in catching the brisky morning munchies.

Ye gods! Whatsa mesa saying?! *Ahem Ahem* Sorry, something got stuck in my throat! Anyways, while I can't imagine a ton of Star Wars fans are desperate to run out and grab a new Jar Jar Binks figure, there is an odd charm to this toy. He's colorful and well sculpted. I really like that he comes with a shield. Since it has a peg on the handle and on the back it can actually be worn in a few different places, something some of the other accessories are lacking the ability to do. This guy is a Good and a 1/2 entry in the line and at least worth a look as you stroll down the toy aisles.