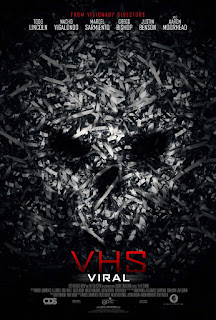 Movie Thoughts by Barbecue17
The movie I watched: V/H/S: Viral
It was directed by: Marcel Sarmiento, Gregg Bishop, Nacho Vigalondo, Justin Benson, and Aaron Scott Moorehead.
It was released in: 2014

Please briefly summarize the plot: The third installment in the V/H/S series gives more weight to the wraparound story, Marcel Sarmiento's Vicious Circles, which was pretty bad. Typically the wraparound story is simply there to give some context to the short anthology films themselves but this time the wraparound took center stage. Too bad, then, that it was so week and almost incomprehensible. A man obsessed with filming his girlfriend attempts to cover a local car chase involving an ice cream truck that may have kidnapped his girlfriend. Randomly throughout this mess the other three films pop up (gone is any attempt to utilize the viewing of V/H/S tapes as a segue into showing the short films. Fortunately, the three short films are pretty good. Dante the Great is about a magician who can perform actual magic, Parallel Monsters is about a man who creates a portal to a parallel dimension in his basement and swaps places with his other dimensional counterpart for 15 minutes, and Bonestorm is about some teenagers creating a skateboarding video in Tijuana, Mexico who get attacked by a Mexican death cult of some sort.


How is this film culturally/ historically significant?: V/H/S: Viral attempts to embrace the way that having cameras recording everywhere has changed our lives. During the wraparound segment we witness the events from cellphones, camcorders, police body cameras, news feeds, traffic cameras, and other devices that capture our lives 24 hours a day. The film does quickly touch on some of the trouble that this culture of "surveillance" can cause: Angry responses from law enforcement, people doing stupid things with the intention of going viral, revenge pornography, and missing out on experiencing a significant due to feeling the need to film it.

What genre would you place this film in? Horror/ Anthology/ Found Footage

How did this film make you feel: V/H/S: Viral is nowhere as scary as it's predecessors. That's not necessarily a bad thing, however, as I found that I actually really enjoyed all three of the short films in the movie. The tone of the three segments felt much closer to something like Creepshow, Tales from the Crypt, or Tales from the Darkside as there was a lot of humor and outlandish situations rather than suspenseful terror. I liked them! Dante the Great is a fantastic segment that I genuinely would like to see as a full length film. Watching a "real" magician fight a SWAT team is as interesting as anything. Parallel Monsters is perhaps the creepiest segment since I really had no idea where it was going. It's so utterly bizarre and demented that I can't much more about it. Bonestorm starts off extremely slow and spends 10-15 minutes being self indulgent like so many found footage films but once the action happens (a group of skateboarders wearing helmet cameras battle a Mexican death cult and an army of skeletons) the fun begins.

The wraparound segment, though, is quite possibly the worst segment from any V/H/S film to date. It's poorly shot, utterly incomprehensible, and just pointless. It has some decent scenes in it (which typically aren't related to the overall storyline) but the overall product is a mess. Apparently a film was actually cut from the movie (which is incredibly short at around 80 minutes) and I'd really like to see what we lost in order to make more room for the wraparound. The director, Marcel Sarmiento, has done some very interesting and provocative work (D is for Dofight from The ABC's of Death and Deadgirl, both of which are two of the most disturbing films I've ever seen), so I had higher hopes for his segment.

What were the most impactful moments of the film? The special effects in the Dante the Great segment are quite fun. Watching Dante use his magical powers in combat is incredibly entertaining. Furthermore, when we see the reveal of the major differences in the two parallel worlds in the Parallel Worlds segment, I think your mind will be blown. I wasn't expecting that. Were you? The first time a member of the Mexican death cult appears in Bonestorm is also pretty creepy. Definitely one of the few truly creepy moments in the movie.

With what other movies would you compare this film? Obviously V/H/S and V/H/S 2, but as I mentioned above I couldn't help but feel the short segments were almost more humorous horror rather than terrifying and creepy horror. They were about shock value, but in a good way. Films like Creepshow and Tales from the Darkside along with Tales from the Crypt really embraced that idea of making horror fun and I feel that this is what V/H/S: Viral's short films do.

What stands out about this film? The short films themselves, a scene where a woman continuously bashes her own head against a wall, and a scene where a guy gets dragged through the streets by an ice cream truck.

What message do you believe the filmmaker was trying to convey? Perhaps our society has really made some unwise choices in being obsessed so much with recording (and being recorded) 24 hours a day. Also, don't go down to Tijuana looking to cause trouble, don't visit parallel dimensions, and don't mess with magicians.