31 Days of Toy Terror Returns: Behemoth from The Nightmare Before Christmas ReAction by Funko 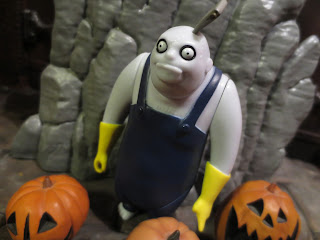 I absolutely love The Nightmare Before Christmas. It's without a doubt one of my favorite "animated" movies (it's stop motion animation, so maybe it doesn't count) and definitely my favorite musical soundtrack of all time. I love it's bright, cheerful depiction of Halloween and every character in the film is an absolute joy to behold. The Behemoth might not be in my top five characters but he's definitely in my top ten and I find that the older I get the more he appeals to me. I love how he mixes together a few different horror movie elements: He's got the body and pallor of Uncle Fester, the body shape and blank stare of one of the zombies from Night of the Living Dead, and the outfit and vibe of a killer from a variety of slasher films. He's everything and nothing, all at once. Plus, he's got that goofy ax stuck in his head. Last month I reviewed the Mr. Miyagi figure from The Karate Kid ReAction series, which I stated that I bought on sale at a flea market along with another figure. Behemoth here is the figure and I've been saving him for 31 Days of Toy Terror. Ready for a closer look? Then join me after the break... 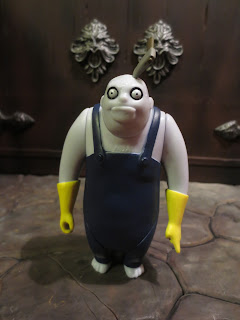 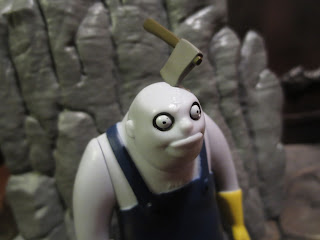 * Behemoth is just fantastic! I actually owned the original Nightmare Before Christmas toys as a child and while these are rather different (those toys were larger and all featured unique action features) the spirit feels much the same. Behemoth captures the lumpy appearance and blank stare of the perfectly. His goofy yellow gloves and saggy suspenders are just perfect as well. And the ax in his head? Solid gold! This figure just works so well! 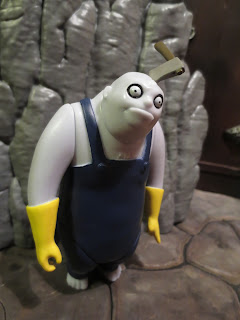 * While the retro styled action figures tend to have a basic, standardized shape, I really like that the Nightmare Before Christmas figures utilize the more unique shapes of the characters from the film. Behemoth is appropriately large and chunky, something you don't often see in this scale. It's a great look and suits the character well.

Oh, and the pointing finger on his left hand? It's so he can point and say "Bunny!" 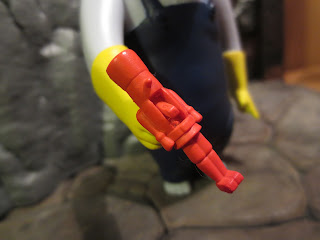 *The Behemoth only comes with one accessory: A nutcracker. The good-natured fellow fiddles around with a nutcracker in the film and it seems that this little element of Christmas makes its way into the Halloweentown Christmas fairly unscathed. It has a little handle on the back. 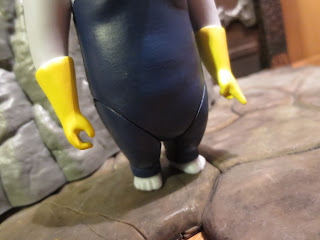 *In order to accommodate his uniquely shaped body, Funko didn't try to make him look like your average retro/ vintage figure. They did give him swivel hinged hips, though. They look fine, but they're pointless. He can't be posed with them and they really don't swivel well (they feel like they'll break if you swivel them). Not a huge problem, but I'm just pointing out that these joints aren't going to be doing anything for you. 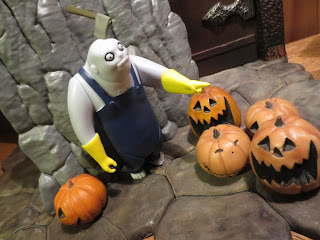 Unless there's a huge durability issue or something it's pretty tough for me to not like a Nightmare Before Christmas item. While I haven't picked up this entire line (the only other one I currently own is Jack) I really do like these. Behemoth is a fun, niche character that will make a comic addition alongside your other Funko ReAction figures. I think this guy will look hilarious next to Jason, Freddy, and Leatherface, don't you? He's a Great addition to the shelf and another hit in this line.

I've reviewed a few other Nightmare Before Christmas figures including: