Action Figure Review: King Chooblah from Masters of the Universe Classics by Mattel 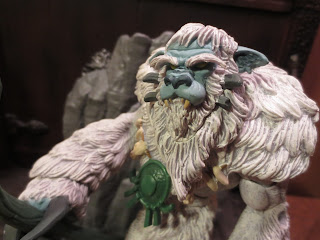 Today's review is the third figure in the Masters of the Universe Classics 200x sub-line: The Kulatak elder King Chooblah! King Chooblah first appeared in the Mike Young Productions (MYP) cartoon series in the early 2000s but never made it into Mattel's accompanying action figure line. He's not a major character by any stretch of the imagination but he is a pretty unique character design. Like other figures in the 200x subline Mattel used a combination of various overlays and uniquely sculpted parts to create a figure with an appearance that stands out from the average MOTUC figure while still feeling like it belongs in the line. Ready for a closer look at King Chooblah? Then join me after the break... 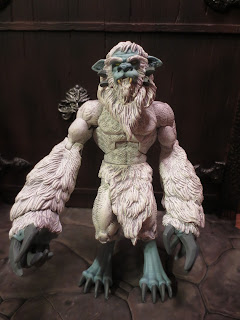 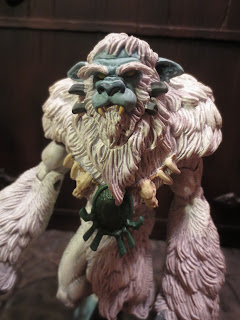 * King Chooblah has one of the best sculpts we've seen in this line yet! There is just so much character in his face! While he's built on the furry Beast Man body a massive overlay really adds some bulk and a bit of a slouch to his posture. The new body elements are covered with detailing that really does give the impression of thick, woolly fur.  I'm also a big fan of his ceremonial necklace. 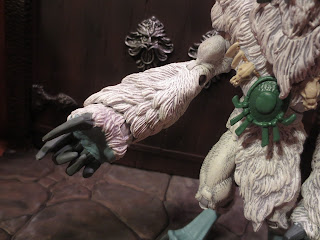 * When it comes to the design and visual aesthetics of the figure I really like how the longer forearms and curved legs help to give King Chooblah a more hulking, simian appearance. He definitely stands out and looks like a completely separate species from your average Eternian.  His paintwork also makes him appear a bit more complex due to some subtle shading differences in his fur. 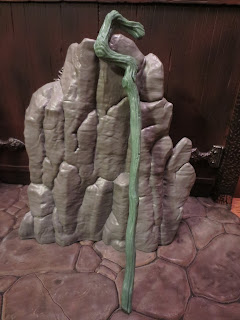 * King Chooblah's only accessory is a long green staff. It's quite solid and definitely helps him to stand on his own. I really like the look of it. Even though green might seem like an odd color, that is actually the color it was in the cartoon. It fits very securely in the king's right hand. 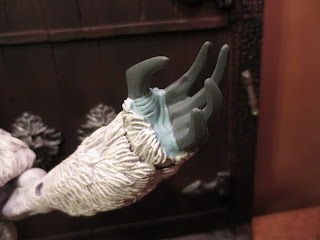 * While King Chooblah only has a staff as an accessory, does he need much else with claws like these? Seriously, those things are sharp! Yikes! His hands and feet just really look like they could do a ton of damage if push came to shove. 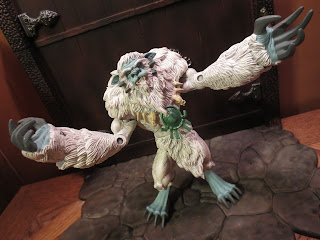 * While King Chooblah mostly has the same articulation as any other figure in the line, it should be noted that since he has longer limbs, and the furry torso overlay his articulation is somewhat impeded. It's not terrible but it does hinder the playability of the figure a bit. 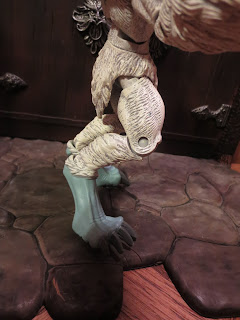 * Fortunately his staff is quite long and helps to prop King Chooblah because otherwise he's very prone to falling over. King Chooblah has some very cool feet that add a good deal of height to the figure but they're a bit unstable. The joins on the "ankles" probably could have been designed a bit better to allow for more stability. 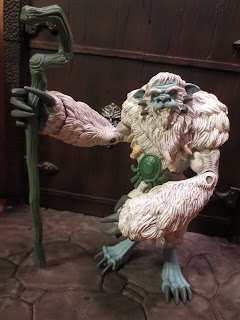 King Chooblah is definitely not a necessary character in the MOTUC series as he had a pretty minor role in the MYP series, isn't helping to complete a vintage (or 200x) line-up in anyway, and wasn't a character I heard too many folks clamoring for over the years. Still, he's a pretty awesome character. There really isn't anyone quite like him in MOTUC yet and he definitely adds a figure to chill out with other leaders like Randor, Angella, and Chief Carnivus. He has some problems such as being easily toppled over and being bit light on accessories, but he also is quite large and extremely well sculpted and painted. This guy gets a Great rating from me. Another accessory would have been nice but it's hard to deny that King Chooblah will stand out on your shelf.

I've reviewed a ton of Masters of the Universe Classics figures, including: