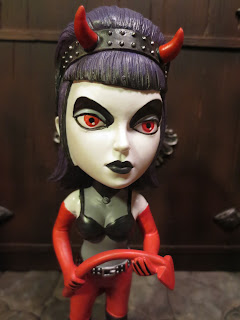 How terrifying is it when something so bad can look so appealing....

Today I'm looking at the last bobble head in Entertainment Earth's Goth Hotties line: The Goth Devil. After checking her out I am now convinced that these are indeed supposed to be regular women in costumes rather than actual monsters in gothic styled accouterments. See her horns? They're a headband. Her tail is also part of her pants and not a real tail poking through. I also want to mention something that I failed to notice on the first three bobble heads: Each Goth Hottie has a necklace that has the Entertainment Earth logo on it. Pretty clever little detail there. Ready to get down to business and check out the flaming hot Goth Devil? Then join me after the break... 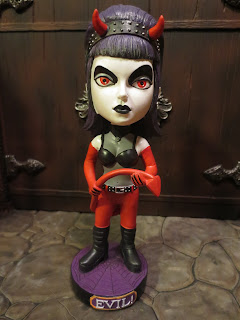 Non-Scalper Price: $13 (although I found the set of four on sale for $6 for the entire set!) 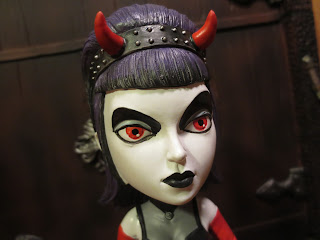 * Like with the rest of the Goth Hotties, the sculpt is lovely. The Goth Devil has a bit more of a severe look on her face than the other ladies in the line, but I think it works here. I love the red eyes, the paler skin and the purple hair. I'm also digging the way her horns are attached to a studded leather hair band. 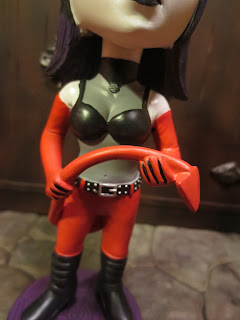 * The Goth Devil's costume isn't bad at all but it is the least interesting of the quartet. The other ladies had costumes that felt a bit more unique but the Goth Devil is pretty much exactly what you might have in mind when you think of a sexy devil costume. She looks like a 90's comic book character! I do like how they handled the mesh of her shirt, though, as it is actually fairly convincing. Nothing bad here but just not as cool as the others. 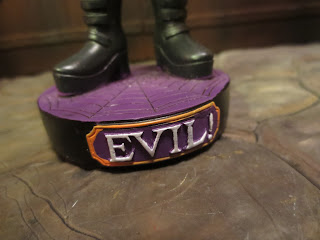 * Evil? Just "Evil?" I was hoping for something better but this is it. I still like the bases on these but I was hoping something a bit more clever or fun. "Tempting" would have been great. "Red Hot" would have worked, too. "Evil," though, just seems... bizarre. 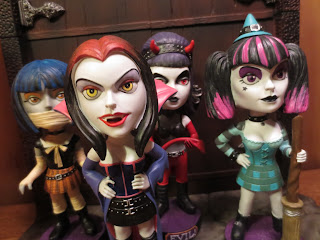 Perhaps I'm being a bit harsh on the Goth Devil, but she's still a cute bobble head that I'll have on display with the rest of the goth gals this Halloween. These are fun, colorful, and fairly creative! I really love the look of them and even though the Goth Devil is a bit weaker than the rest, she's still a Good and a 1/2 Bobble Head. Overall I think I'd rate these from my favorite to least favorite: Goth Mummy, Goth Witch, Goth Vampire, and Goth Devil. For the $6 I spent on these, I'm not sure I could have done any better.