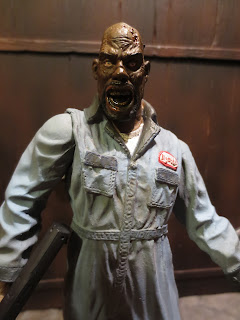 What makes zombies so terrifying to so many? Is it that they look like us? Perhaps it is because of their resemblance to our families and our friends that we fear them so much. Perhaps it's that while "dead" and reduced to the most basic function of survival, eating, sometimes they show a small spark of life that reminds us that they're not all that different from us...

Back in the mid-2000s, everybody who was anybody was doing a toyline that encompassed a wide range of disparate characters. McFarlane had Movie Maniacs, NECA had Cult Classics, N2 Toys had Hardened, and SOTA had Now Playing. Now Playing had some of the most obscure licenses such as Darkman, Dog Soldiers, and The Toxic Crusader but in 2006 they released a series of figures under the Now Playing banner based on the previous year's Land of the Dead, the long awaited fourth film in George Romero's Living Dead series. Played by Eugene Clark, Big Daddy is a zombie who seems to be more intelligent than the rest and capable of some degree of strategy. He becomes a leader to the zombies and guides them against the luxurious Fiddler's Green housing complex. Ready for a closer look at Big Daddy? Then join me after the break... 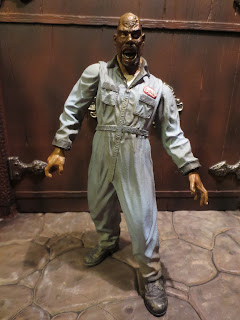 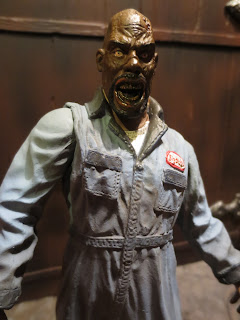 *Big Daddy is a nice looking figure. He's a pretty basic looking zombie but everything about him works. The headsculpt is excellent and does a pretty fine job of capturing the film version of the character. He's wearing some mechanics overalls which look appropriately baggy and worn. 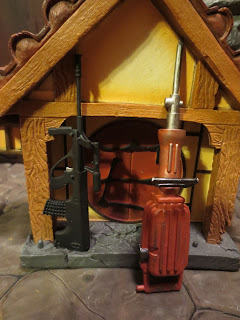 * Since Big Daddy is portrayed as being more intelligent than your average zombie, he comes with a few tools he uses in fighting against the living: A jackhammer and a Steyr AUG assault rifle. Both of these weapons can fit in Big Daddy's right hand and they're both really impressive. Crisp, sharp sculpts and nice paint applications make them definitely feel like very high quality pieces. It's not often that zombies come with accessories like this. 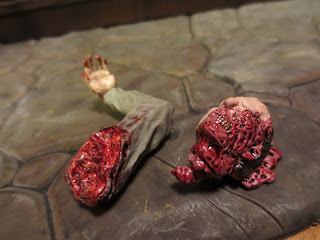 * A more standard accessory for a zombie figure is bits and pieces of one of their victims. The three figures in this line (Big Daddy, the Butcher, and Machete) all come with pieces to a victim. It's not really a Build-a-Figure, as they don't snap together, but you can "scatter about" the entire corpse of a victim. Big Daddy comes with a left arm and a smashed head. Everything is suitably icky here. 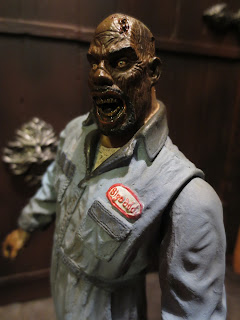 
*The overall paint isn't bad at all, but take a closer look at Big Daddy's name tag. Something is off, isn't it? Here's a hint: It doesn't say "Big Daddy." It says "Big Dadd." I even checked movie stills to make sure this wasn't something the film did but it's not. This guy's name tag is screwed up. 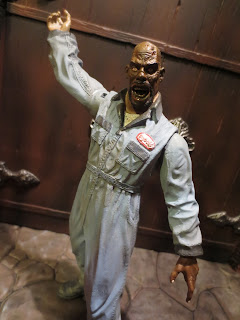 * I'm not expecting the most articulation from a zombie but Big Daddy is woefully under-articulated. His head and shoulders have a decent range of movement, but everything else is static. A ball jointed waist or some elbow joints would have been excellent in giving this figure a little more life. Err... I mean death. 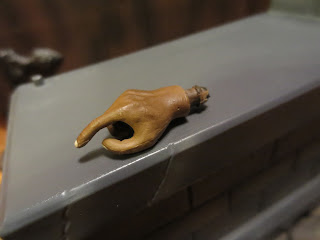 *Since you really don't hold an assault rifle the same way you hold a jackhammer, Big Daddy came with two right hands that can be swapped out. Well, that's the point, anyways. After a few attempts, I decided that trying to swap the hands was just going to lead to a broken joint, so I stopped. 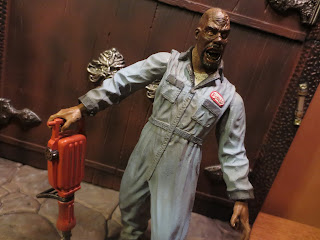 While it was cool that SOTA released some Land of the Dead figures under their Now Playing banner, these were definitely not the greatest zombie figures. They're good zombie figures, but not great ones. I like the look of Big Daddy, and the weapons are fantastic, but there are definitely some problems here. The name tag being off really irks me for some reason, as does the fact that his hands just cannot safely swap out. Overall, I'm giving him a Good. He looks great as part of a giant zombie scene (that's how mine is displayed) but on his own he's somewhat underwhelming.

The Real Ghostbusters: Monsters by Kenner (1989)
The Zombie Monster