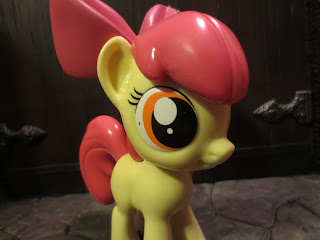 I figured some of you needed a bit of respite from all of the horror and terror that's been going on around here lately, so here's a review of a My Little Pony Vinyl Collectible from Funko! Over the weekend I'm going to be reviewing all three of the Cutie Mark Crusaders, Apple Bloom, Scootaloo, and Sweetie Belle. These have been available at Hot Topic as a timed exclusive for a month or so now. Eventually they'll appear in other markets but, right now, Hot Topic is your best bet to snag these. If you order them online just be aware that there are crystal/ glitter variants of each one so, if you're not into those (like me) just be warned. Today to help with this review I've brought in my little 2-year old. For the purposes of her privacy, I'll simply refer to her as Alamena Diane Pie. Ready for this tag-team review of Apple Bloom, Applejack and Big McIntosh's little sister? Then join me after the break... 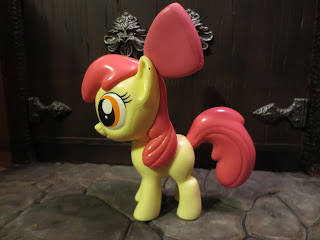 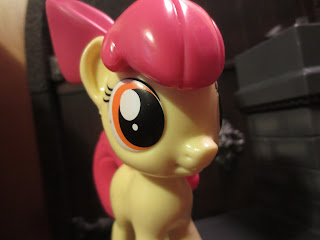 Here is our review session. All quotes are from ADP unless otherwise noted. 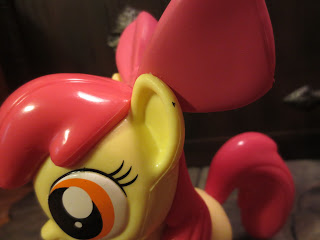 *ADP is now interested that I have pockets on my dress slacks. Now she's laughing. Now Apple Bloom is walking on my arm.* "Push Apple Bloom" 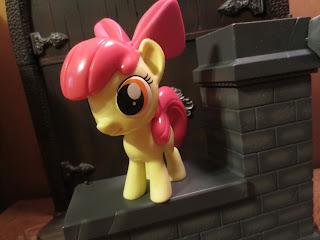 Let's be honest. For those of you interested in these vinyl figures, I think you know exactly what you're getting. They're cute sculpts with a little bit of that weird scuffing and the mold lines that certain vinyl products end up with. Apple Bloom has been a huge hit around our house lately (ADP got a stuffed one from Build a Bear back in August) so she was pretty excited to see her. She's a funny, sassy character on the show and Funko did a nice job with her. I'm giving her a Good and a 1/2 rating. ADP, what do you think?
* ADP holds Apple Bloom in her arms and giggles, then asks for Rainbow Dash*