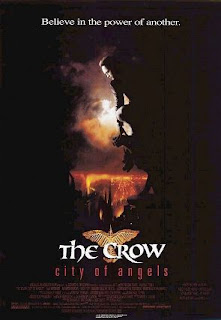 Movie Thoughts by Barbecue17
The movie I watched: The Crow: City of Angels
It was directed by: Tim Pope
It was released in: 1996

Please briefly summarize the plot: Have you seen The Crow? Then you've basically seen this movie. The plot is almost exactly the same as the first film except with none of the charisma of Brandon Lee making it work and fewer interesting supporting characters. The little girl from the first film, Sarah, is all grown up now (played by Mia Kershner) and has moved to Los Angeles. On All Saints Day she is led by a crow and witnesses the resurrection of Ashe Corven (Vincent Perez), a father who was murdered along with his young son by a drug kingpin. He then goes on to seek revenge against the drug kingpin and his cronies: the yellow ranger, the Punisher, and Iggy Pop.


How is this film culturally/ historically significant?: The Crow was a hit and this movie was an attempt at a sequel directed by music video director Tim Pope and written by David S. Goyer. Of course, the difficulty was that they wanted to create something unique and separate the first film while the studio wanted something similar. Ultimately, whatever happened led to a sequel that the studio reedited and Goyer and Pope shunned.


What genre would you place this film in? Action/ Revenge/ Supernatural

How did this film make you feel: While the movie is definitely fun, it really does give you a sense of deja vu since it follows the exact same plot beats as the first film: Innocent person and a loved one killed by a gang, innocent person resurrected to seek vengeance as the Crow during a spooky holiday, the Crow takes down big bad's lackeys one by one, Crow intervenes in the life of a drug user, mysterious woman tells big bad how to defeat the Crow, the Crow loses powers, final fight with big bad, etc. I like that the movie uses El Dia de la Muerte as a backdrop rather than the first film's Devil's Night and Halloween, as the imagery is excellent, but there really just isn't much development here. I know it had to be tough to try and take on a starring role in this franchise after the excellent performance by Brandon Lee, but I have to admit that Vincent Perez is really, really dull.

What were the most impactful moments of the film? Since The Crow: City of Angels is a revenge film, they gotta show you something that gets your blood boiling, so the scenes where Ashe Corven and his son are murdered definitely will get at you. Of course, there are still some good scenes where the Crow gets back at the folks who did him wrong including a fight in a warehouse full of explosives, an attack by a murder of crows, and a great scene in a peep show booth.

With what other movies would you compare this film? As a revenge film you'll definitely think of movies like the Death Wish series, The Punisher, and The Last House on the Left. In terms of the film's cinematography and style you'll definitely see Tim Pope's roots as a music video director. Besides the original film, think of films like Spawn, Dark City, and even Tim Burton's Batman films.

What stands out about this film? Not the character of the Crow, sadly. Mia Kershner does a good job as an older Sarah, though, and ends up being the most interesting character in the film. I was particularly thrilled to also see the late Thuy Trang (the original Yellow Ranger, Trini Kwan) in one of her few film roles. The bad guys are interesting and chew a lot of scenery and the fight scenes are good. Stylistically, I like the design of the city and the incorporation of the Day of the Dead elements.

What message do you believe the filmmaker was trying to convey? Drug manufacturers and criminal organizations are scum, creative people live in abandoned warehouses, and the best way to make a sequel is to do exactly what the first film did with as few changes as possible.