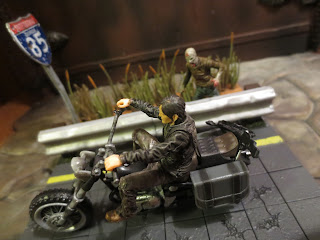 It seems like an understatement to say that The Walking Dead has been a success. It's amazing how people have latched onto the show and its characeters. While there has been a steady stream of merchandise and action figures, I can't say that I've picked any of it up. I like McFarlane's figures for the line but the odd scale has kept me away so far. Last year these new construction sets were released and I definitely found them interesting. While you build them and they use Lego like pieces, they're definitely far more polished looking than a Lego kit. They're far more like model kits than a traditional building toy. I've avoided these for about a year but a few months ago my parents found some of these on clearance and snagged them for me to review as part of 31 Days of Toy Terror. I've been interested to see how these work. Ready for a closer look at today's set, Daryl with Chopper? Then join me after the break... 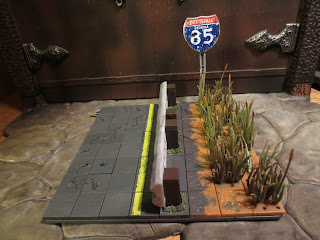 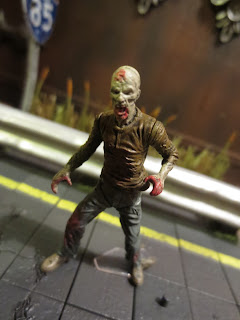 * The set comes with one walker. He's about 2 1/4 inches tall (the same size as the Mega Blocks Call of Duty Zombies) and features swivel hips, a swivel waist, swivel shoulders, and swivel head. There's a lot of nice sculpting here and a fairly decent paint job for a figure this size. 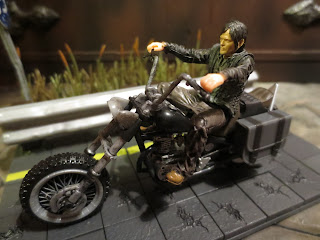 * Daryl Dixon is permanently posed in a sitting position. He has swivel shoulders and a swivel neck. He's actually quite well sculpted too. The paint work is a bit of a muddy affair, but that could almost be forgive as part of this line's design aesthetic. 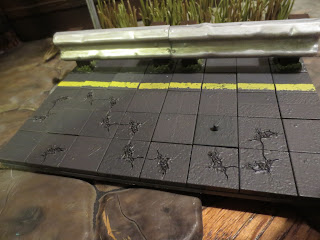 *I like the design of this set. The small stretch of highway, the shot up, weather beaten sign, and the overgrown grass just past the guardrails definitely bring to mind images from The Walking Dead. 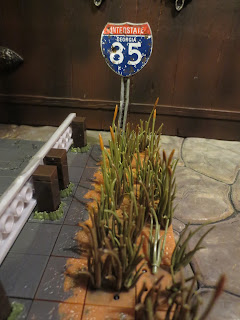 * While the Walking Dead building sets definitely are not intended for crafting your own designs like Lego, Mega Blocks, or other building block toys, they definitely have an impressive, detailed diorama like quality about them. For years I've talked about how much I love McFarlane's Monsters and, in some bizarre way, these kind of remind me of those. While they use a Lego-like stud based building system (originally Todd McFarlane kept calling them nipples) you're really intended to only make small changes such as changing around the grass or modifying the cracks on the street. Still, they look incredible on display. 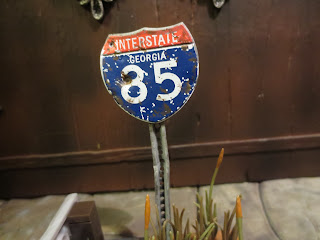 * The paint and sculpting work on the pieces in the set really looks lovely and reminds us of what McFarlane is capable of. This sign, while just a shot up old highway sign, is amazing. The paintwork, the weathering, and the sculpt of things such as the post really capture every necessary detail. I'm a geocacher, so I am intimately familiar with both signs like this and guardrails. 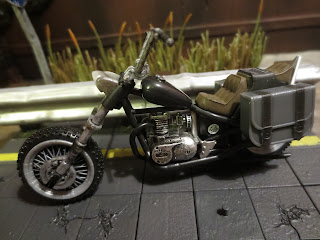 * Daryl Dixon and his unique motorcycle have definitely become iconic images of the Walking Dead television series. This set comes with Daryl and his bike and, I have to say, the motorcycle is pretty cool. While it's all made from plastic it really has a very realistic appearance. There's lots of dry brushing on the engine and metal parts to give it a gritty, used feel. The rear tire has a hole in it that can be plugged onto the peg seen in the picture, allowing the bike to stand upright. 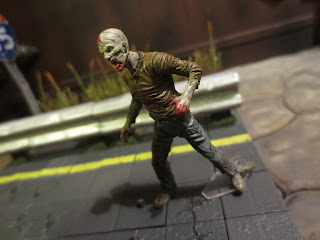 *The set only comes with one walker and he's disappointingly difficult to stand up. There's no pegs to attach his feet to or anything. He comes with a clear plastic stand that fits on his ankle but it's rather ugly (there's a large peg on his foot) and it doesn't work too well. This guy will get knocked over quite often, I reckon. 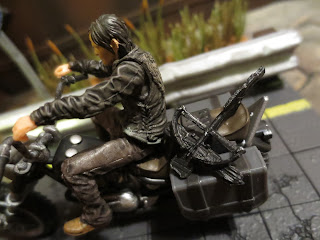 * It's cool that Daryl has his crossbow and that he can be removed from the motorcycle, but there's really no way to actually attach the figure or the accessory to the bike with any security. Since Daryl can't use the crossbow, why does it need to be removable? I also wish the figure could attach more securely. You'll often find Daryl Dixon slumped over as if he has a bit too much moonshine. 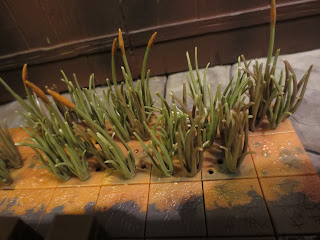 * While I love the look of the grass and weeds growing alongside the road in this set, it's absolutely frustrating to put each of these little pieces into the tiles. They also tend to fall out a bit when you move the set so every now and then you'll find yourself picking up a loose piece of grass and looking for a space to plug it back in. Tweezers help. 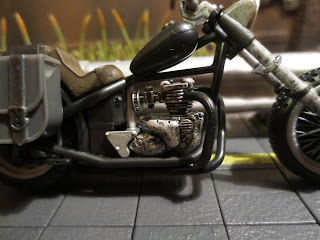 * There are some tiny, tiny pieces on this set. It's still fun to build but I'll admit that I had a tough time putting some of the elements of the motorcycle together. It's less like building a Lego vehicle and more like assembling a model or a mid-1980's G.I. Joe vehicle in a smaller scale. The exhaust pipes on this thing were frustrating to get on properly. 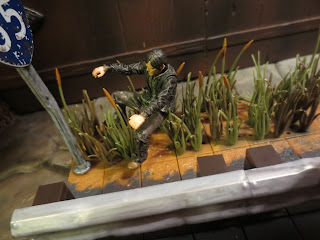 * I mentioned this above, but I'll reiterate here that this set really just allows you to move the figures in different places, change the road tiles up, and move the grass to different places. There's not a ton of room for actual building unless you're buying multiple sets and mixing these in with other building bricks. Since Daryl is permanently poses in a squatting position, you can reenact the never before viewed scenes where he takes a dump on the side of the road. 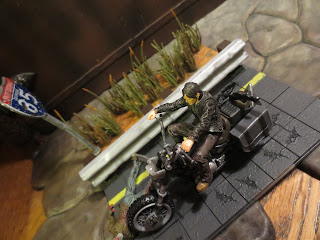 I'm not 100 percent sure who McFarlane's target audience is for these, although I do really like them. They're definitely not for folks who really love the versatility of Lego and building their own creations. They're also fairly involved and pricey, thus not a trinket for fans of the show who are only casual collectors or toy enthusiasts. I'm guessing these are more for diorama lovers, like myself, who appreciate the build and the style. In some ways they remind me of Toy Biz's Armies of Middle Earth line from the early-mid 2000's. This set was fun to assemble and looks great on display. It's definitely recognizable. It's a Good and a 1/2 building set that fills a very narrow niche. I'm interested to see how the second series of these does as McFarlane is not only releasing more The Walking Dead sets but is also putting out sets based on A Game of Thrones.
Posted by Barbecue17 at 10/27/2015