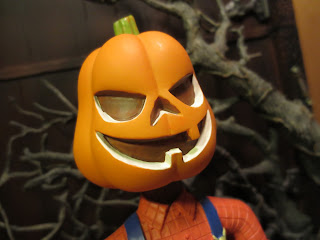 The line between fun and fright can be incredibly thin come Halloween time. A simple scarecrow that usually brings a smile to the face can become something terrifying come October...

I love to find more unusual things to review as part of 31 Days of Toy Terror! Today I'm looking at a really cool bobble head figure that I picked up on sale from Entertainment Earth in late August. I've never heard of these before but they're called Classic Favorites Bobble Heads. The Jack-O-Lantern is from a subset called Holiday Friends which includes a number of traditional holiday characters such as a vampire, a witch, cupid, Santa Claus, and a sexy Ms. Claus. I only bought the horror themed ones on sale (which I got for about $2 each!) and I've been placing them around the house as the make excellent Halloween decorations.  I love scarecrows and pumpkin headed characters so I just knew I'd pick this guy up. Ready for a quick look? Then join me after the break... 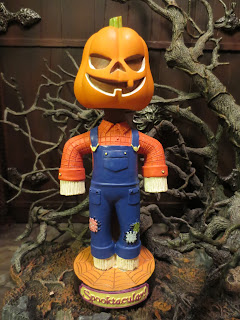 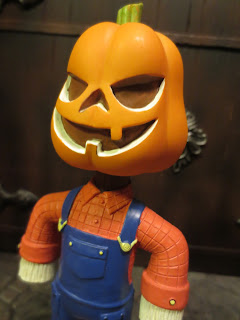 *This is an amazing pumpkin head sculpt! It's so handsome and manly! Seriously, I bet lots of people just love this guy. Hey...wait a minute! He looks just like me! Seriously, check out the side of your screen! Yup, this is basically a small statue paying tribute to the awesomeness of myself, Barbecue17! I love it! I'm equal parts fun and terrifying! 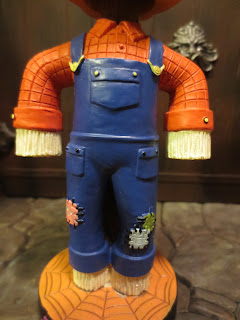 * These aren't quite the clothes I wear on normal occasions but I like them. It's interesting that Entertainment Earth chose to show me with straw coming out of my arms and legs: I only use that tactic when I'm trying to startle someone. I totally wear plaid button up shirts all the time but I'm not big on overalls. Not sure I ever owned a pair. Maybe I need to pick some up? 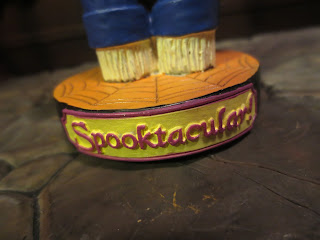 * I love the spiderweb base with the words "Spooktacular" on it. I am spooktacular! I'm always spooktacular! If you buy one of these and sit it around your house, you'll definitely have a better Halloween season. Every time you're going to do something you'll think "How could I make this spookier?" 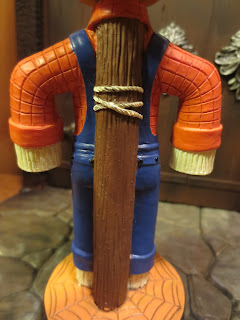 *While I'm perfectly capable of standing up on my own I do like to rest against wooden poles. It's a nice detail! 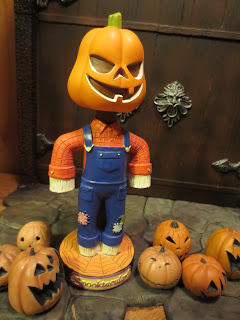 I'm going to pretend this is a figure of me, Barbecue17, so I think this easily deserves an Epic rating. Seriously, who wouldn't want a little statue of me hanging out in their home, office, or car to remind them to be spooktacular? I'd never hard of these little bobble heads before but it's evident that they've heard of me. I'm OK with that, though. Seriously, you need to go out and buy one of these. I can almost guarantee you that your Halloween will be so much better if you own one. Are you getting ready to make dinner? Use some orange food coloring and spice it up a bit! Getting ready to watch TV? Make things spooktacular by watching something scary instead of the latest fad sitcom. Running outside to take out the trash? Literally run outside and pretend a serial killer is chasing you! Have the best Halloween figure ever and pick up this figure! Send me pictures of this figure being spooktacular and I might send you back a prize!

Legends of the Dark Knight by Kenner
Twister Strike Scarecrow