31 Days of Toy Terror Returns: Roger the Homunculus from Hellboy by Mezco 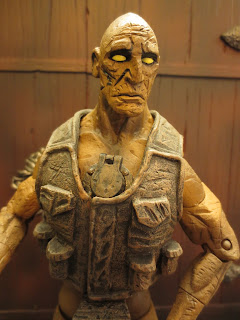 Hello horror and Halloween fans! The air is crisper, the candy is more plentiful, and horror movies are playing non-stop! Yes boils and ghouls, it's time for 31 Days of Toy Terror Returns! While my excitement for Halloween has clearly shown through for the past 2 months or so (I literally call August 1st the beginning of Pre-Halloween) today I really start putting things into high gear by giving you guys a review of a horror toy from my collection every day! Some of these toys are clearly horror themed while others might just be a particularly frightening character from an otherwise unfrightening line. They're all designed to give you goosebumps, however, so enjoy a look through my toy vaults of terror once a day for the next 31 days!

This year I'm kicking things off with a review of a creepy looking character who is actually a pretty great guy: Roger the Homunculus! Roger first appeared in the Hellboy series Wake the Devil back in 1996 and later became a significant part of the B.P.R.D. crew. A blending of magic and science, Roger was found in an alchemist's lab in a Romanian Castle by the BPRD. Sounds like a spooky way to meet a friend to me! Anyways, Roger was included as one of the figures in series 2 of Mezco's Hellboy line based on Mike Mignola's amazing and long running comic series. After the success of their toyline based on the 2004 Guillermo del Toro film adaptation, Mezco decided to explore the comics a bit. While sales didn't warrant a third series of figures, the two series and handful of exclusives that Mezco did put out are some of the greatest comic based action figures ever produced. While Roger's not the most popular member of the BPRD he's definitely a fantastic character an Mezco turned him into an incredibly creepy figure. Ready for a look at this hulking homunculus? Then join me after the break...if you dare! 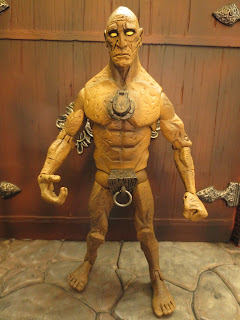 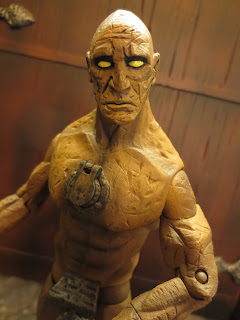 *Roger features a beautiful sculpt that captures the rough, minimalist artwork that readers of the Hellboy and BPRD comics will recognize. There's some excellent detail and paintwork that gives the figure an amazing presence. That headsculpt is just incredible! Mezco really knocked it out of the park on this line and Roger might be one of the best examples of what they were capable of during the mid-2000s. He's truly impressive, even by today's standards. 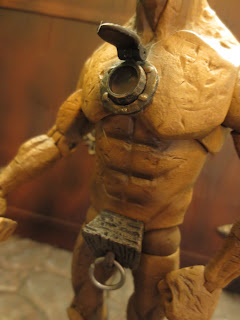 *One cool aspect of this figure is the opening gas cap on Roger's chest. It looks appropriately aged and weathered thanks to some nice detailed sculpting and some great paint application techniques. Roger also has his crotch block on. It's a large piece of wood (Heh Heh) with an actual metal ring through it. The grain pattern of the aged wood on the sculpt is excellent as well. Seriously, Mezco's work on these figures is truly a visual delight. 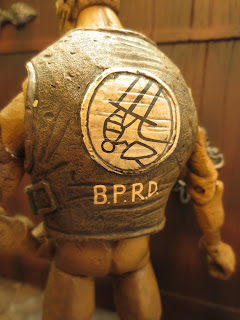 *While director Tom Manning really wanted Roger to wear pants, this figure only comes with his field vest. It's made from a softer, rubbery plastic and easily fits over Roger's frame. It has a great distressed appearance to it and the very cool BPRD logo on the bag. 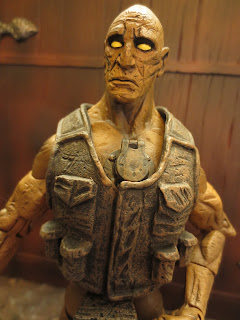 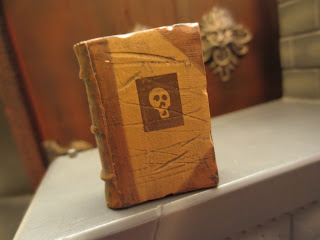 * I'm always a fan of action figure scaled books and this one is fantastic. It has an amazing sculpt with some nice texturing and a cool skull logo on the front. It looks like it was literally lifted from one of the comic's panels. Honestly, it probably as. 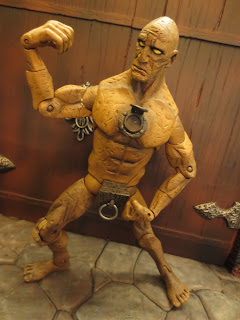 *Roger features a nice amount of articulation and feels very durable. Mezco always seems to produce pretty sturdy toys so I'm glad they worked on this line. Roger has an excellent range of motion, although he's not the most agile guy. He's pretty much a tank in the BPRD who can deal damage and take damage with his massive size and strength. 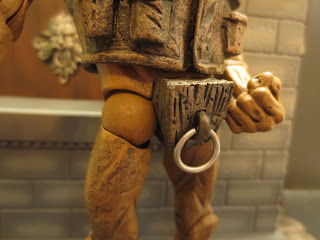 
*Those hips! Ugh! While Roger's hips have a wide range of motion they're quite hideous. They remind me of the older styled Marvel Legends hips which I have always hated . 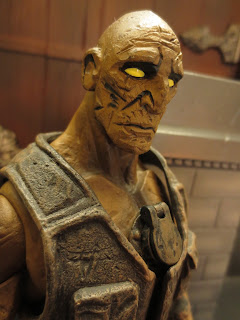 Roger the Homunculus is an amazing action figure. Seriously, he could be released today almost 10 years later and still impress buyers. The Hellboy universe is absolutely amazing but for some reason it seems to fail to catch on in a big way. While Mezco released a great deal of product, they always seemed to encounter problems. Tthe Hellboy and Hellboy II: The Golden Army lines each got two waves of figures, as did the comic based series, which is just not enough! There should continue to be Hellboy comic based toys in stores (honestly, there should be toys from Sir Edward Grey, Witchfinder, and Baltimore, too)! If I could have any line make a comeback I think it might just be Mezco's Hellboy line. Roger is the perfect example of what made this line so special! He may not be terrifying, but the fact that we've gotten so few Hellboy based toys is!


I've only reviewed one other Hellboy toy:
The Angel of Death from the Hellboy 2: The Golden Army line!

Keep coming back for more spooky fun here at Action Figure Barbecue!
Posted by Barbecue17 at 10/01/2015