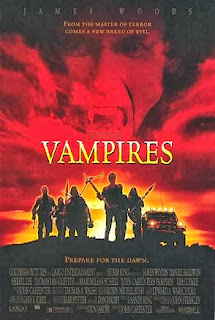 I originally reviewed this movie in October 2013 at ThEpic Review.

There were some fantastic vampire movies that came out in the late 90's right around the time I was getting into horror movies that have shaped my love for watching those bloodsucking fiends get what's coming to them ever since: Blade, From Dusk 'Til Dawn, The Night Flyer, and John Carpenter's Vampires all were released within a few years of each other and helped to shape my taste in horror. I absolutely love the idea of ordinary humans fighting against evil supernatural forces, and that's what Vampires is in a nutshell: a story about a group of vampire hunters employed by the Catholic Church led by the roughest, toughest hombre you'll ever meet, Jack Crow (James Woods). Based on the book Vampire$ by John Steakley (I need to put that on my reading list) Vampires is a fun and gory film that will probably elicit more chuckles than screams. Some people seem to really not like this movie, but I think it's a blast and never get tired of watching it. C'mon; vampires, vampire hunters, Catholic conspiracies, Laura Palmer, one of the Baldwin brothers continually cauterizing his own wounds, people getting beheaded left and right, a black cross that gives vampires superpowers, and James Woods beating up a priest only to later ask said priest if the beating "gave him wood." If you don't enjoy this movie, you probably don't have a pulse. More thoughts after the break, though....


Where to start? How about with James Woods, whose performance absolutely makes the movie. Woods' Jack Crow, a man who lost his own parents to vampirism as a child, is a fabulous addition to the roster of tough guys that Carpenter has brought to life in many of his other films such as R.J. Macready, Snake Plissken, and John Nada. Woods truly makes Crow a man who will use anyone and anything around him to accomplish his goal of slaying vampires. It's pretty clear that while he works for the Church, Crow's only doing so because it gives him the resources he needs. He's crass, short tempered, and respects no one except those who will put themselves on the line in the same he will. Whether you find Woods' Crow to be likeable or despicable, you certainly have to agree he's entertaining and someone you'd want on your side during a fight.

Vampires is very much a western, complete with a southwestern influenced score by Carpenter. There seems to be a lot of vampire lore in recent years that takes place along the border between the American Southwest and Mexico, and I believe the reason why is that in that locale you get a combination of necessary factors that help to bring the traditional vampire story over into the Americas while preserving some necessary elements, all of which factor into Vampires. For starters the dichotomy between the sun bleached day and the cold desert nights enhances the standard day and night dichotomy of the world of the vampire. Secondly, in the Southwest and Northern Mexico you have an abundance of Catholic imagery, something that brings an ancient and often austere presence to the New World. There's very much a connection to the past in that part of the world that is lost in so many other places. There's plenty of small (or abandoned) towns, open stretches of road, and true wilderness to get lost in. All of these are utilized in Vampires to give the film a vibe that while distinct from the gothic castles and old world European setting of more classic vampire films still manages to convey the same feelings.

The clash between old and new is a central theme of the film. While the vampires are a menace over 600 years old (in this film, vampirism is created due to an ancient inverse exorcism ritual gone horribly wrong), the team of vampire hunters utilize very sleek, modern technology to eradicate the bloodsucking menace. Not unlike a modern swat team or an anti-terrorist squad, Crow's team of hunters are mobile, well armed, and, honed to deliver a lethal blow to the vampires as quickly and efficiently as possible. What causes the initial failure of Crow's team is a combination of a long kept secret and one of the most ancient of human sins, betrayal. Vampires features an interesting premise that keeps the movie flowing along at a consistent pace with a few twists and turns. If your idea of a vampire movie is less sparkly emo kids writing poetry and more James Woods ruthlessly stabbing vampires in the heart with a giant spear, give Vampires a try. I'm not going to argue that it's Academy Award winning material, but it's incredibly enjoyable for gore hounds.