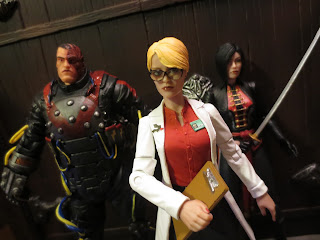 How often does a company really make the effort to finish up a cast of characters from a videogame or movie? It's quite rare which is why I was so amazed that DC Collectibles showed this set off at the New York Toy Fair this past year. DC Collectibles' Arkham Origins line was released in late 2013 and was quite good. A second series was released in 2014 which featured some excellent figures including many first time or uncommon Batman villains such as Anarky and Firefly. One of the major plot elements of the game is that eight assassins are hired by Black Mask to hunt down Batman. As of the end of series 2 it seemed like we'd forever be left with only five of the assassins: Bane, Deadshot, Deathstroke, Killer Croc, and Firefly. During late 2014, however, DC Collectibles released a three pack that included Copperhead. We were one closer to completing this group! This past year, at Toy Fair, DC Collectibles showed off this set and not only marked off the last two assassins, the never before made Lady Shiva and Electrocutioner, but they included a minor character from the game who is perhaps one of the most desirable characters never made into an action figure yet (although she has a Lego): Dr. Harleen Quinzel. Yes, DC Collectibles has finally released a figure of Harley Quinn in her civilian alter-ego. This was the figure that stole Toy Fair for me. I've been looking forward to this set ever since then and I'm pumped to finally have it! Ready for a closer look at this cast of three all new figures? Then join me after the break... 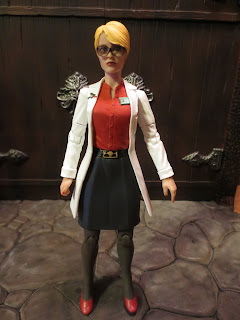 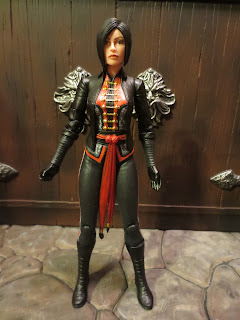 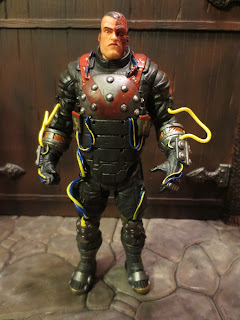 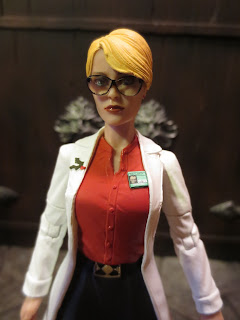 * I cannot believe that I'm actually holding a Dr. Harleen Quinzel action figure! She looks perfect. She's totally the opposite of Harley Quinn: Her hair is neatly done up in a bun, she's wearing some very studious looking gasses, her make-up and earrings are extremely conservative, and her outfit is neat and professional. She's really gorgeous! This is one of those figures of a character which I had little hope of ever owning, so forgive me if I'm gushing.

Fun Fact: Harleen is voiced by Tara Strong in the game. 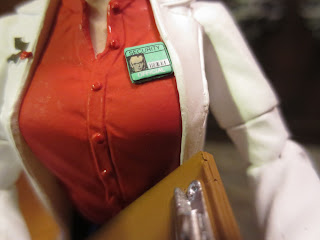 *I love the small details on Dr. Quinzel's jacket, including her Arkham security badge, a sprig of mistletoe, and some pens. Oh, and she's carrying a clipboard! How sensible and professional! I bet she's scrawling some notes about the Joker on it! 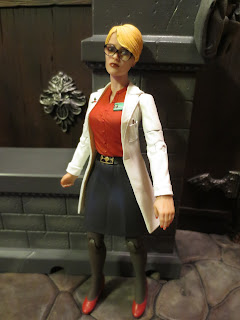 * I love how Dr. Quinzel's outfit manages to give her a layered look without bulking her up. Her jacket and skirt are separate soft rubber pieces but they look so good on her. She really is perfectly designed! 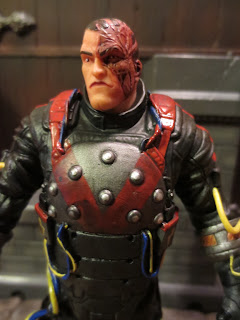 * Electroctioner also has a really impressive sculpt. His face looks really stern and determined despite the massive scarring on the left side of his head. If this guy decided he wanted to join a gang, I'm sure Two-Face would have a place for him.

His armor looks quite complex as it seems to be both heavily armored and heavily insulated. The paint work is nice and matches the grimy look of the game's aesthetic. Lots of nice washes and stuff going on here. 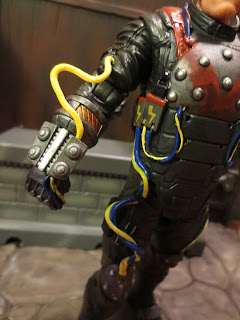 * Electrocutioner needs that insulation because of his electrical gloves. Man, do these things look cool. He's covered with more colored cords, odd pieces of tech, and belt devices than a Ghostbusters cosplayer. The wires are nice and flexible so you don't have to worry about them snapping off. What's cool is that the cords easily slip out of the gloves so that they don't impede articulation or cause breakage. This is all really well thought out. 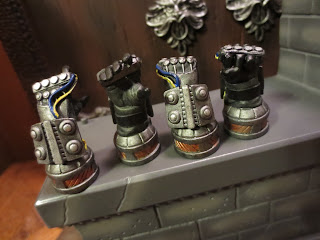 * It's definitely not an accessory I'd miss if it weren't here but I really like Electrocutioner's swappable gloves. He comes with two sets: Open hands and closed hands. They're incredibly detailed and swap pretty easily. The peg on his forearm is thick and really sturdy, so I don't think you'll need to worry about breakage. 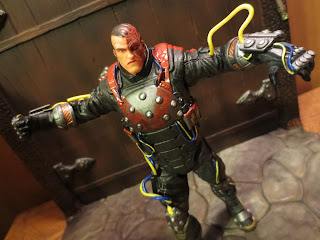 * I love how Electrocutioner is much larger than your average figure. He's not as massive as Bane or Killer Croc but he's still pretty bulky and imposing. I'm really digging how good he looks when compared to Batman. While we know he's ultimately kind of a lightweight, he still looks like a formidable foe. 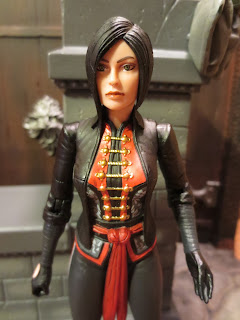 * Lady Shiva has a gorgeous headsculpt. I love her face, particularly how neat the paintwork is on her eyes, and her hair is really well done. She's definitely an impressive looking figure. 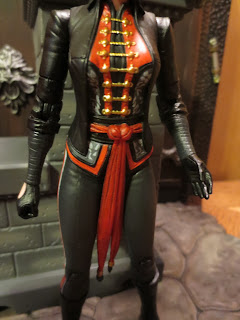 * Lady Shiva's costume is gorgeous. Not only is it incredibly detailed but the mixture of black and red with gold clasps just looks fantastic. The paint work is very neat, even on the grey patterned corset she's wearing under the jacket. The sash around her waist is made from a softer material and hangs quite naturally. 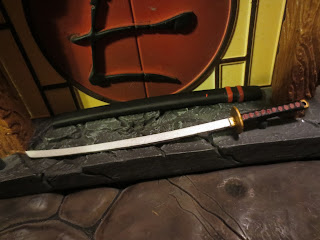 * Since she's a warrior (one of the best in the world, in fact) lady Shiva comes with her katana. The katana comes with a scabbard that it can be stored in. She can hold both accessories in her hands for use during combat. 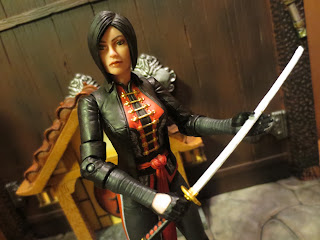 * I really, really just love that we've finally gotten a Lady Shiva figure. She just looks so cool and intimidating! If you think about it, this set gives us a never before released Batman figure from the 1970s (Shiva), 1980s (Electrocutioner), and 1990s (Harleen). That's kind of impressive. 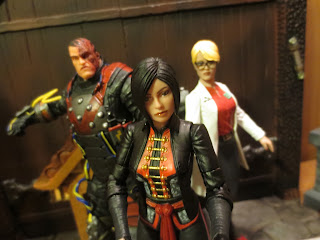 * While the articulation isn't the best on these figures (I'll deal with that in a minute), I do appreciate that each figure has a ball jointed head. There is no joint on a figure that I feel is more important in expressing emotion than the head and these are just so well done. There is a wide range of motion to allow for plenty of expression. 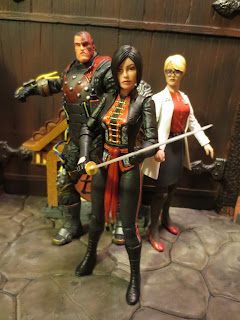 *The only thing negative about this set is that the figures lower bodies are really pretty static. The leg articulation is a mixed bag and everyone has swivel hips. I get that that was pretty much the default articulation for most of the Arkham lines up until the Arkham Knight figures but, considering Copperhead had some incredible articulation, I had some slim hopes that DC Collectibles might have tried to work some more articulation in, at least on Electrocutioner and Lady Shiva (despite her being my favorite, Dr. Quinzel is just a civilian character here and really only needs to stand around and look smart. 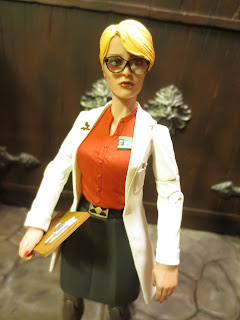 If you were reading my reviews a few years ago, particularly back in 2012 and early 2013, I was really down on DC Collectibles: Massive breakage issues, multipacks that forced you to buy figures you already owned, cost cutting, and a lack of unique characters really had me down. DC Collectibles has turned things around like crazy! This month we got these three characters new to the 6-7 inch scale (other than the Dr. Harleen Quinzel Lego, none of them have been made in action figure form) and in the coming weeks were supposed to be getting plenty more Arkham Knight and Batman Animated figures. I love DC Collectibles right now as this is probably the best time ever to be a Batman fan who collects action figures. If you can accept that this set features more limited articulation because it was designed to fall in line with the older style of figures that lasted through three videogames, then this set is incredible. I'm absolutely injecting my personal bias into this review (they are subjective after all) but I have no hesitation in giving this set an Epic review. This is a dream come true for Batman fans and Arkham fans who never thought we'd get the final two assassins, much less Dr. Quinzel. DC Collectibles seems to know exactly what Batman and DC collectors want and they are delivering. They are delivering indeed, puddin'. 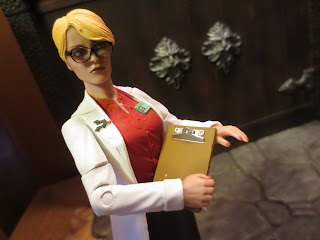 From other Arkham Games, I've reviewed:

If you're looking for more Harley Quinn reviewed, I've looked at the Imaginext The Joker & Harley Quinn, the Suicide Squad Harley Quinn and the roller derby Harley Quinn from DC Collectibles, and the S.H. Figuarts Harley Quinn (Injustice Version). Oh, and the Arkham Asylum Lego set I mentioned above.
Posted by Barbecue17 at 10/12/2015