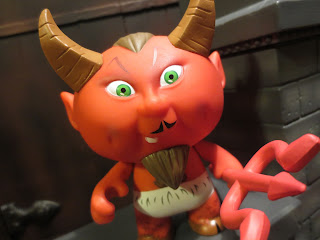 The idea of a being or entity of pure evil is a terrifying thought...

Today I'm looking at Hot Scott, another figure from Funko's Garbage Pail Kids Really Big Mystery Minis line.  Hot Scott is a little devil...literally. Seriously, he's not in a costume: He actually looks like a traditional depiction of devil. He's got horns, hooves, and a trident. Is he a devil child like Hot Stuff? Who knows? Perhaps I can tempt you to take a closer look at Hot Scott, after the break of course... 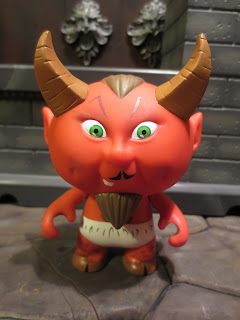 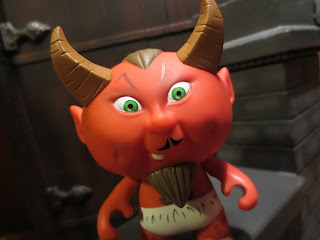 * Hot Scott has a really cool headsculpt. One thing I really like about these figures compared to some vinyl lines is that each headsculpt is a unique sculpt. It's more than just paint that differentiates each figure and Scott has a lot of rather unique and devilish features: Horns, a slicked back widows peak, a snaggletoothed grin, and a goatee. His feet are also hooves. Fiendish! 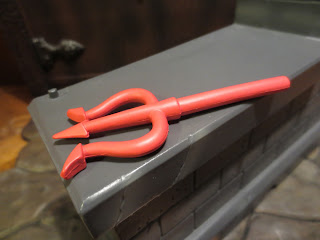 * I'm really glad that a number of the figures in this series come with some accessory (6 out of the 12 do). Scott comes with a simple trident. It's great for roasting hot dogs and tormenting sinners. 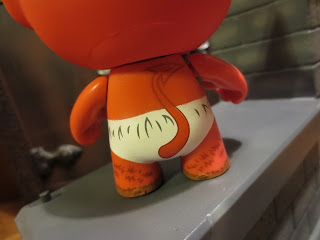 *While all of the figures in the series have the details of their bodies painted on rather than sculpted, a more three dimensional element such as Scott's tail seems like it would have been better executed as an actual separate piece (maybe even articulated). Not a huge issue, just something that I think could have been done a bit cooler. 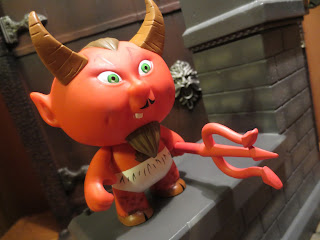 Hot Scott's not a bad mini but I don't find him particularly creative compared to the other Garbage Pail Kids. He looks decent and the headsculpt is awesome, but I really can't get too excited about him. He's fairly average so I'll give him a Good rating. I really only picked him up since I ordered an entire case of these figures and I'm glad to have the complete set.