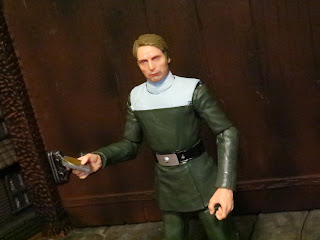 I'm here again with another bargain bin goodie! Yes, the bin store I've been shopping at a lot lately (and some of y'all are all jelly) has had a shelf full of the Target exclusive Galen Erso figure for a couple months for $10 each, but when I found one in the bargain bin (three for $14 dollars) I finally snagged him. I love Rogue One. It's not just the best of the Disney era Star Wars movies but it's even one of the best when looking at all of the films as a whole. When I made my list of the top 10 figures we still needed from the Sequel Trilogy era of films (2015-2019), a few Rogue One characters did make my list, but not Galen Erso. He's a significant character in the overall story, even though he doesn't have a lot of screen time, and since Hasbro went back last year and this year and really filled out the Rogue One cast he was a good choice. He's not a very exciting figure, though. He's kind of the equivalent of some of the Episode 1 figures like Chancellor Valorum, or the vintage Imperial Dignitary, in terms of excitement factor. Let's take a look at the Black Series Galen Erso and see how he fares after the break... 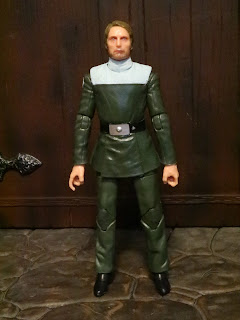 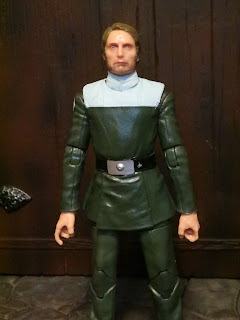 
* Galen Erso is a scientist under the Tarkin Initiative of the Galactic Empire, so he's wearing an Imperial outfit in a greenish gray color with a white collar/ shoulder piece and the logo of the Tarkin Initiative on the right shoulder. The figure uses some new parts mixed with parts from the Phase III Grand Moff Tarkin and Lando Calrissian figures to create Galen's outfit, which looks pretty accurate to the film. He's got the code cylinders up by his shoulders and the Imperial dress belt to complete the look. 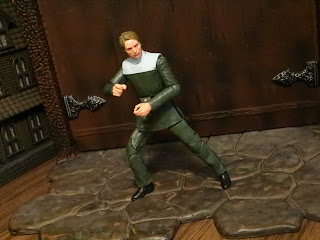 * While he has a mixture of older and newer articulation styles, Galen Erso still moves quite nicely, especially in the arms and head. The neck is articulated at the base of his high collar and his head looks like a barbell joint which gives everything fantastic function. Galen doesn't really fight or anything, but you should still be able to achieve any poses you'd like. 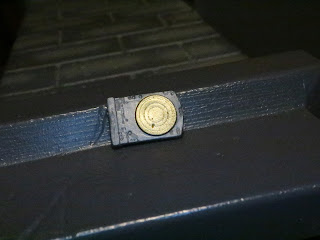 * Galen Erso only includes one accessory, but it makes sense: It's the data drive with the Death Star plans on it. It's fitting, even though he doesn't physically carry it around in the film. It's a great plot item. It's reused from Rebel Trooper figure from 2018, but I can't think of much else to give Galen. Maybe some Kyber crystals? 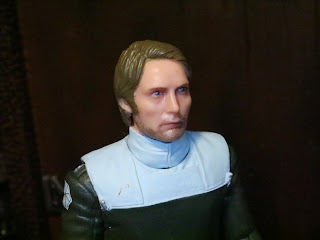 * I'm really curious if Hasbro has had this sculpt hanging around for awhile, maybe since around the 2016 release of Rogue One, but they held off for some reason. A lot of Rogue One figures sat due to weird case packs. That being said, the likeness is good from some angles and the paint work/ face printing is also pretty strong. It's definitely recognizable as Mads Mikkelsen...

* But it's not perfect. There's a weird, somewhat lifeless quality to it, and some of the details look a bit too soft. 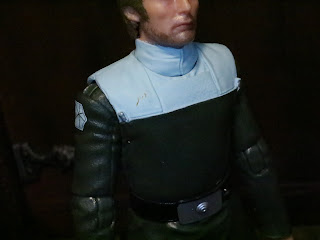 * Maybe Galen spilled some Nerf Nuggets with Rancor Sauce on his shirt because my figure has a weird stain on the front. It looks like some paint slop, maybe from the printing process. Is that possible? 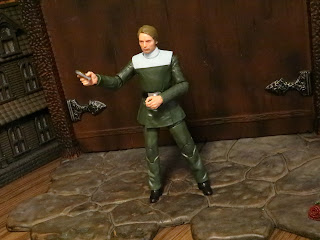 Galen Erso is an important character and I can see why Hasbro wanted to release him along with the other new additions and the the re-releases of the main Rogue One cast in Phase IV, but as a figure he's just really dull and kind of weak. The likeness is just really 50/50, sometimes excellent and sometime looking kind of washed out, and the fact that he's just a guy in an imperial suit with no extras other than the reused data drive makes him kind of boring. He's really an Eh figure. If you get him heavily marked down or on sale (like me) or if you really, really, absolutely need a Galen Erso, go for it. Otherwise, he's an easy pass. He's just not that exciting of a figure and not well done enough to be impressive.