Wrapping Up 2022: No Limits Trashin' Pumpkin from Madballs by Premium DNA 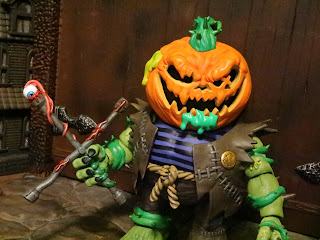 Preface: Some collectors may be very aware that Premium DNA Toys has/ had had affiliations with Toy Overlord, Inc. and Megalopolis: City of Collectibles, a collectible. This is a great write up about the history of the companies with information about how many customers lost money on items they preordered but never received. The past couple of years have seen a few smaller companies fold, leaving customers out of money (i.e. Dorkside Collectibles). After this brief preface, this review will strictly be focusing on the merits of the toy that was purchased. Fee free to discuss this in the comments if you'd like, though. For full disclosure, I obtained my figure through Big Bad Toy Store on my own dime.

I love action figures with jack o'lantern heads. That's kind of my thing. I mean, look at the background image to your left or right. Anyways, while I did have a few Madballs as a very young child, I don't really have a ton of nostalgia for them. They're cool and all, but I don't have a lot of memories of playing with them. When I saw No Limits Trashin' Pumpkin, however, I was immediately in love. This is a new character created by Premium DNA toys for this action figure revival of Madballs and he has ties with the videogame Need For Speed: No Limits. I'm not really much into racing games, so I was completely clueless about this particular installment in the Need For Speed series or how a giant pumpkin man could tie in with a sports car racing game. I guess he was released as a decoration to appear on cars or something for a Madballs promotional. Who cares, though, right? I picked this toy up because he's a jack o'lantern guy who looks like he has a bad attitude. This is what I look like when I'm out and about on a toy hunt and come across people swapping parts in packaged figures (aka Toy Aisle Trolls) and selves of the same old stuff. The pumpkin is my spirit gourd and No Limits' Trashin Pumpkin is me when I get nasty and have to pull out a tire iron from my trunk to dispense some street justice on those stockboys hoarding all the good stuff. 😠💥💀 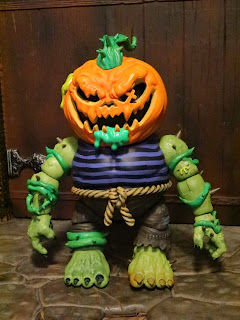 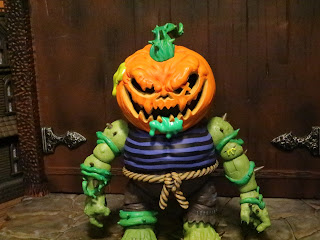 * The Madballs figures look to be very stylized, almost like modern day vintage Playmates Teenage Mutant Ninja Turtles figures. Slightly exaggerated proportions, bright colors, and lots of funky details. Trashin' Pumpkin definitely seems to have a body made out of vines or roots with smaller vines all over him. I love his black and purple striped shirt. It's pretty cool, plus he's just using a robe for a belt. He's a simple guy. Those spikes all over him are a real hazard, so be careful! They're nice and sharp! 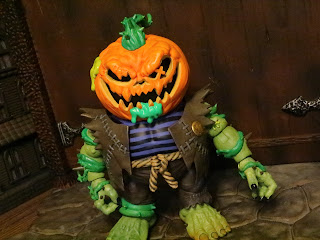 * The stitched together leather vest that Trashin' Pumpkin comes with is easy to pop on and off. The figure is fairly easy to take apart (he's "Madular") so just pop the arms off. I'm loving the detail on the stiches and the button on Trashin' Pumpkin's vest. He's hip and looks like he's been out sleeping rough in the patches. 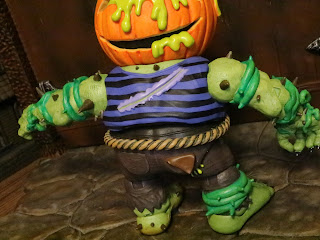 * Flip him around without his jacket/ vest and you can see not only a large tear in his shirt (or maybe it's a gash from a fight he was in) but also a torn back pocket on his trousers. The paintwork is really excellent on this figure and really sells every detail here. 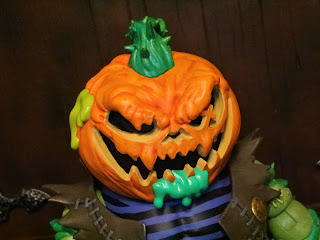 * Let's talk about this headsculpt, because it is absolutely amazing. he's an evil looking jack o'lantern, sure, but there's so much cool stuff here. Green slime oozing from his mouth and the side of his head! A spikey stem! Jagged teeth! A cross shaped left eye. Is he cross eyed then? Maybe.

The sculpt is just stellar and the paint operations really bring out all of the details. It doesn't feel like any shortcuts were taken with this dude. 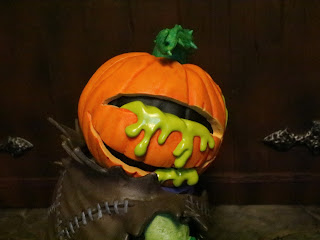 * Wat is going on with the back of this guy's head? What happened here? He's got an open head wound just oozing yellow stuff. That is just gruesome! Pretty awesome, too. Not going to lie. I would have gone absolutely nuts over this guy as a kid. 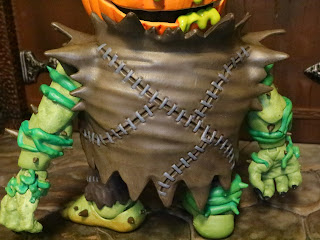 * Here's a hot of the back of Trashin' Pumpkin's jacket so you can see the fantastic work on the stapled together jacket. 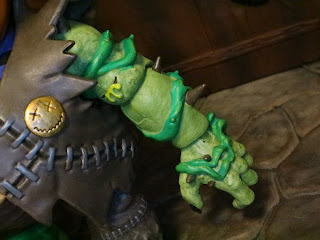 * And here's a closeup of one of his arms. His arms are clearly some sort of massive roots or vines while there are also smaller, snakier vines running up and down them. Lots of spikes, too. He's apparently pretty lethal bare handed. 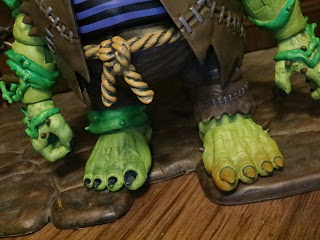 * I love that his feet aren't the same color. The left foot looks like it has some sort of a fungus or a blight on it. If he does lose that leg, what's he going to replace it with? 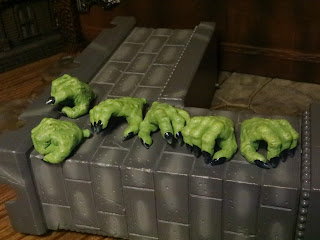 * There are twelve hands included with the No Limits Trashin' Pumpkin, but only eleven of them are his! Here are six hands without vines. You've got a gesturing right hand, a right hand fist, a pair of regular open hands, and a pair of standard grips. Everything swaps easily and the pegs feel quite sturdy to me. 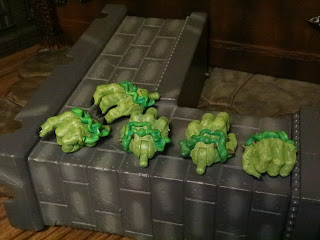 * The final five hands are covered with vines, which makes them extra cool. There's a gesturing left hand, an open left hand, a pair of grips, and a left handed fist. That's a lot of options for getting this guy to pose however you want him to. 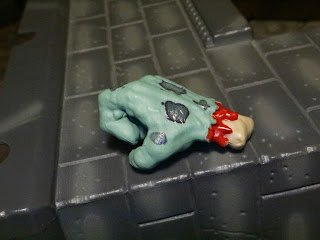 * The twelfth hand isn't his at all. It's a random zombie hand, complete with splotchy, decaying flesh and a visible bone sticking out at the wrist. Where did he get this? Why the heck is the Trashin' Pumpkin carrying this thing around? Is this his sidekick? Maybe the hand of the person who carved him up? 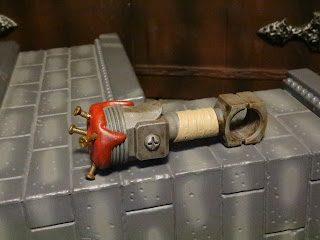 * All of the Madballs figures from Premium DNA look to have some sweet weaponry and that absolutely holds true for T.P. First up, he has a piston. The paintwork is excellent here as this thing actually looks rusty. There's threadts on the end, Philips head bolts, some tape fashioning a crude handle, and a mass of blood with rusty nails sticking out of it. What the heck? I love it, but what the heck? 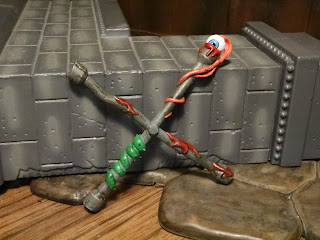 * My favorite weapon is the tire iron. It also looks worn, perhaps stained with oil, and there are even sockets on each end. It's spiced up with some vines, some...guts, maybe, and an eyeball, still attached to the thing that holds an eyeball in place. There are so may different paint applications on this and it's really impressive. Honestly, it seems like most action figures available at retail don't have this many unique paint applications. I'm counting at least 9 different colors on here. 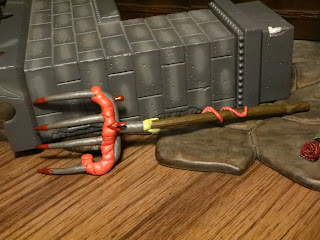 * The largest accessory is a giant pitchfork. This is absolutely what Trashin' Pumpkin needs when he's out roaming the fields looking for trouble. It's a standard farmers pitchfork and it's covered with standard junk: Worms, blood, a stretch of intestines. Yeah, Premium DNA has definitely retained the gross out factor of Madballs and has probably amped things up a bit. Nice. 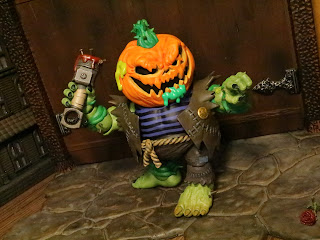 * The No Limits Trashin' Pumpkin isn't built like an athlete, so he's not going to be winning any gymnastics competitions or anything. He does, however, have some great articulation for a portly fellow. The joints are smooth and pretty tight, but not overly so. He really is fun to pose and play with, especially with the balljointed waist and head. 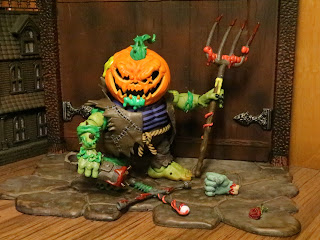 I am nuts about this figure. I know Premium DNA has had other Madballs figures out and some Barnyard Commandos figures but, man, this is some serious stuff. No Limits Trashin' Pumpkin is definitely one of my top figures of 2022 for sure. This guy just works; excellent paint applications, a fun, creative sculpt, so many unique details, and some of the craziest and most disgusting accessories you'll find. This guy is pure Epic and a real gem. He's so incredible that he almost makes me contemplate picking up the other Madballs figures. 🔥🔥🔥 Call the fire truck, because this guy is hot fire all the way around.


This is the first figure of Trashin' Pumpkin I've reviewed.