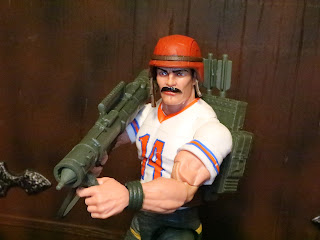 I've only got a few 2022 reviews left to finish up before the end of January but I'm anxious to jump into the 2023 G.I. Joe: Classified Series figures since it's pretty much my favorite line currently on the market. Target's current theme for their exclusives is Tiger Force versus Python Patrol and I've got a load of new troops from both subsets to check out. Let's start by taking a look at Bazooka, or David L. "Bazooka" Katzenbogen, as the packaging calls him. That is his file name, after all, so it's not something Hasbro just went and made up new. They've clearly lost the trademark or whatever for just Bazooka as they started calling him Sgt. Bazooka in 2004 (even though that figure always looked more like Zap to me). Thinking back to my childhood Joes, there were quite a few major characters that I only was able to own because of the Tiger Force subset. Flint, Duke, Bazooka, Dusty, Frostbite, and Tripwire were all earlier releases that I only had a chance at because they were rereleased. I've always had a fondness for the subset and I'm quite glad that Hasbro's utilizing it (I'm not usually all about repaints but I'm hoping for Night Force, too). While he wasn't released until the 1985 lineup, Bazooka was a recognizable character who had a lot of presence in the line and various marketing and licensed materials. I mean, a big guy in a jersey with a missile launcher stands out. I was curious to see how the current Hasbro Classified Series team updated Bazooka, and the answer is "Not much." He's definitely a figure who is overwhelmingly just a bigger, better version of the vintage toy (or the 25th Anniversary figure; take your pick). Is he worth adding to your Classified Series lineup? Let's check him out after the break and find out... 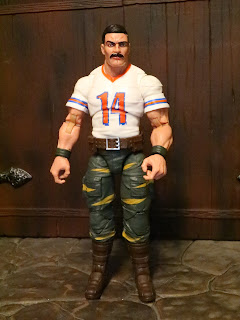 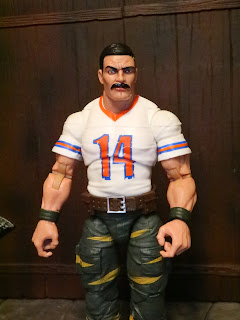 * Bazooka's a guy in camo pants wearing a football jersey and that's pretty much what you've got here. He's a bigger guy, pretty muscular and just larger than your average joe (Joe), but he's wearing a simple outfit. The Tiger Force version of Bazooka has a white jersey with orange and blue writing and the number #14 on it. I really like that the numbers and stripes do show some wear, as if they're slightly faded or starting to crack, and the shirt sleeves look like jersey cuffs rather than just being painted on some standard arms. Bazooka's pants are pretty cool, too; I wonder if he digs Battle Cat? 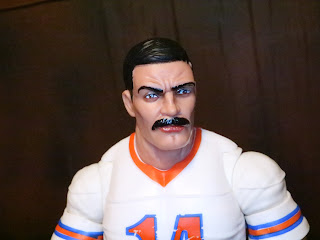 * That portrait is fantastic. Bazooka kind of looks like a really beefed up Freddy Mercury, which is pretty cool, actually. The Classified Series team is doing a great job of giving each figure a lot of character in their face and expression and Bazooka's is another solid piece of work. The cocked eyebrow definitely works for him. 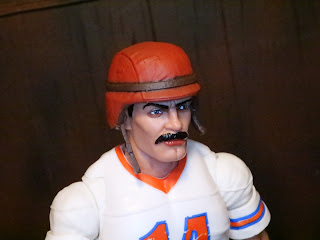 * I'm absolutely loving the helmet. It's really bright, kind of an orangish red with brown straps. The sculpt is really nice and the different textures are all noticeable and well rendered here. It also fits on his head perfectly. 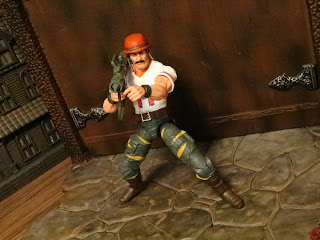 * Bazooka is a big dude but he can move with the best of them. Yeah, he's got all of the joints and the quality you expect from a Classified Series, but most importantly is that he can wield his missile launcher like a champion. He looks fantastic in two handed poses, holding the weapon just as he should. He's also stout enough and well balanced enough to stand upright with the launcher in most battle poses. 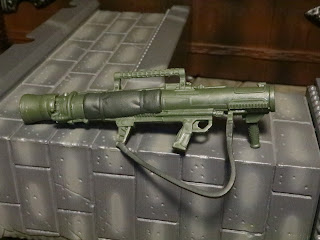 * I'm really glad that Hasbro does seem to have updated Bazooka's missile launcher into a more modern weapon that looks more like an M3 anti-tank weapon. It's a really nice sculpt that looks like a pretty powerful tool. Definitely not super high tech, but way more modern than a bazooka. Probably something easy for Bazooka to tote around, sling, around, knock around, and just generally abuse. The paintwork is nice as there are applications on the carrying strap and on the padding on the sides. 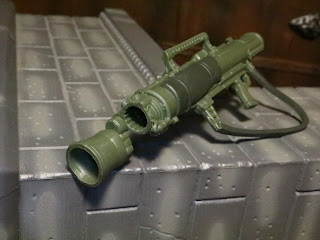 * The back of Bazooka's launcher has a loading port which can slide open or be completely removed to allow for a projectile to be loaded inside. That's a pretty neat feature. 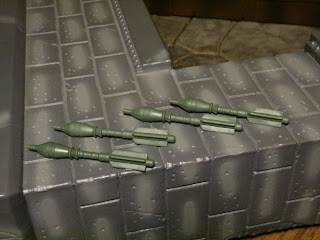 * Bazooka comes with four projectiles which look like old school bazooka rounds. I really wish we'd had something updated and more modern. In Mark Bellomo's The Ultimate Guide to G.I. Joe, there's even a quote from one of Larry Hama's notes to the Hasbro design team telling them how antiquated and obsolete actual bazookas were back in the early 1980s. Maybe Mr. Hama needs to consult with the modern team, too. These look great, though, and you get four of them. Oddly enough, one of them is molded in a shinier green plastic than the others, which are duller. 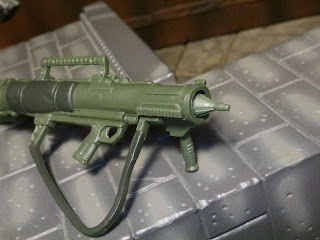 * The rockets fit inside the barrel, too, which looks really cool. I've seen folks add their own effects and even some from Mezco's One:12 Collective line, so you've got a lot of options here. When you seat a missile in the rear it pushes the front missile forward, and vice versa. There's a narrower part of the launcher which prevents missiles from sliding all the way through and getting stuck. It's pretty well designed. 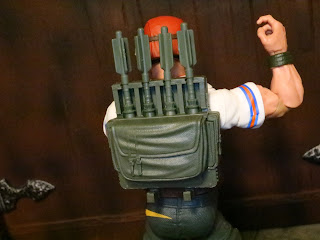 * Bazooka comes with his standard backpack that's mostly taken up by a rack for storing missiles. 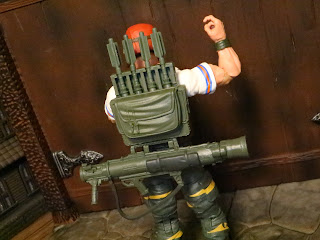 * There's also a hook on the bottom where he can store his rocket launcher when not in use. That's a detail borrowed from the 25th Anniversary Collection version of Bazooka. 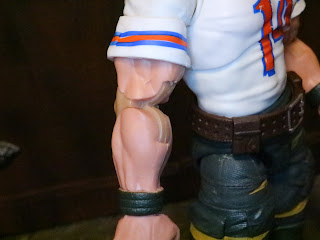 * The weirdest issue with Bazooka is that his elbows are molded in a very different shade of plastic than his arms. It's darker, maybe with a hint of green to it. What happened here? Maybe a different type of plastic, perhaps one more solid, for the joint? If Hasbro's going to keep jumping up prices and begin insisting on windowless packaging, these are the little things they're going to have to fix. 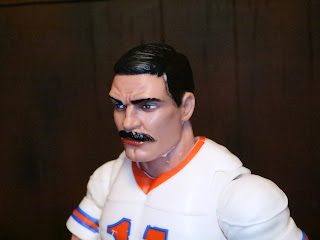 * Not only does my Bazooka have some missing paint on the side of his hairline but he also has some flashing on his jawline. I'll have to trim it off. I haven't seen flash like that on anything from Hasbro that I can recall recently, so it's a really weird QC error. 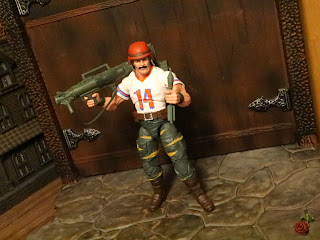 David L. "Bazooka" Katzenbogen leaves me very conflicted. I like the figure quite a bit and without the QC issues he would have been a very solid release. Yeah, I do wish he had some more "Classified Series" updates like a sidearm or a secondary weapon, maybe even some upgraded missiles (imagine rockets with different tips like Lady Jaye's javelins), but the figure itself it really good with a great headsculpt and helmet and a nicely updated missile launcher. Those darn elbows and the paint error and flashing on the face do bug me, though. Bazooka gets a Good and a 1/2 from me. He's still very fun, especially if you end up with out the issues on the headsculpt.