Wrapping Up 2022: Zarana from G.I. Joe: Classified Series by Hasbro 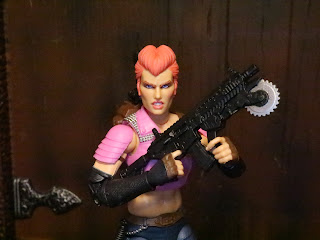 1986 was the year I started receiving G.I. Joe figures. Either 1986 or very early 1987, because the 1986 figures were definitely the first ones I had (and I still have most of them, too). I was probably around 3 at the time, but I guess I was more responsible and didn't stick parts in my mouth or anything. I had Zarana and Zandar but I never had Zartan. I guess he wasn't readily available anymore when I started getting into G.I. Joe. As a kid I will have to say that neither Zandar nor Zarana really impressed me;they were colorful and stood out, sure, but they seemed kind of odd to me compared to the other Cobra figures I had. As I've gotten older I appreciate the Dreadnoks more, especially when I went back and reread the original Marvel series in the early-mid 2000s, and I'm quite excited for the Dreadnok ranks to fill out in the Classified Series. Zarana is only the second Dreadnok to be released (after Zartan) and, wow, is she impressive. Honestly, she was a figure that just floored me once I got her in hand because she's just much better than I expected. She's easily a top five Joe figure of the year, and maybe even a top three. She's an assassin, a biker, a method actor, and one heck of an action figure. Let's check out Zarana after the break... 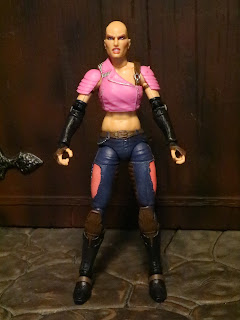 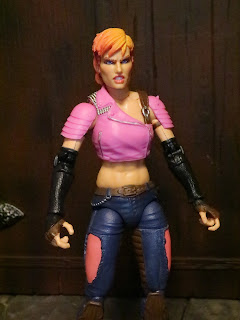 * Zarana looks amazing. The colors, the sculpt, the paint detail, her midriff; this is one fine looking figure! Zarana appears to be built on a basic, bare torso with her shirt/ partial biker jacket actually being a separate overlay. It looks great and really adds to her vintage punk rock aesthetic. The shoulder pads are separate pieces as well (though permanently attached) and complement the jacket nicely. She's also sporting arm sleeves and fingerless gloves. It's a similar look to the vintage figure, sure, but it's much improved and better designed. The colors are also a bit more muted than on the vintage toy, which really helps her to fit in better, though I'd wager it's unlikely that Zarana really cares at all about fitting in. 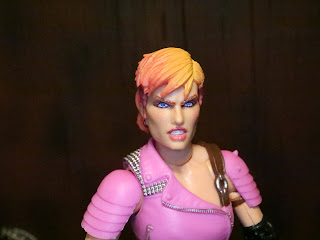 * Zarana's face really seems to draw inspiration from the vintage backer card art. She has some intense eyes and the paintwork is just excellent. She's not unattractive at all, but she definitely isn't your garden variety pretty face. She really does look tough with some very severe features and a nicely rendered scowl. 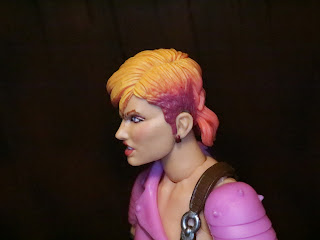 * Like Lady Jaye, Zarana comes with two different hairpieces which can fit over her head. The first is a more modern looking hairdo with her hair at different lengths and three different colors. This is my favorite of the two. 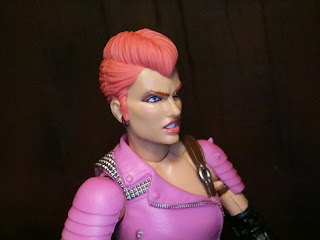 * The second hairpiece is closer to her vintage look and has more of a classic punk/ biker/rockabilly feel to it. It's kind of a mohawk, but the sides of her head aren't shaved. Both hairpieces fit on really well and look like quite seamless. 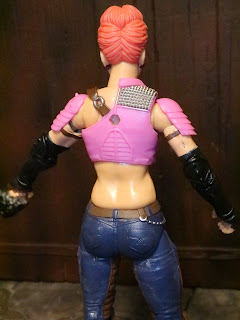 * Flip Zarana around and you can see more of her jacket, including a large patch of studs on her right shoulder and some interesting design on the rear middle of the jacket. 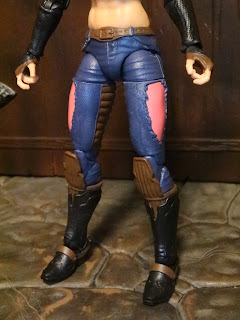 * Zarana's jeans are really impressive with a great texture, a cool belt with a chain, and rips on the sides showing off the pink tights she's wearing underneath. 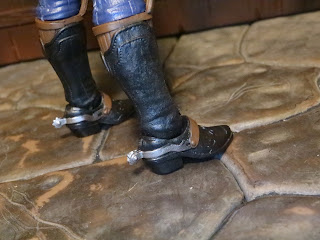 * She's also sporting some really cool motorcycle boots with spurs attached to the back. I'm assuming those spurs are more for looks and for fighting rather than for actual horseback riding. They're such a cool detail. heck, there is even stitching on the boots which you can see when you look close. That's pretty neat, too. 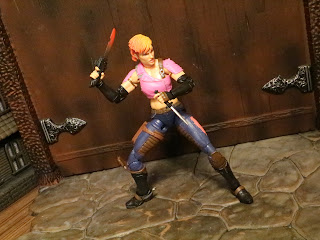 * The articulation is excellent. Everything on Zarana is smooth, tight, and has a great range of motion. Her figure is largely unconstrained by any costume elements that get in the way of articulation, too, so she can take some fantastic poses. She even has the lateral "butterfly" hinges hidden under her shirt, so she can get some great two-handed firing stances. 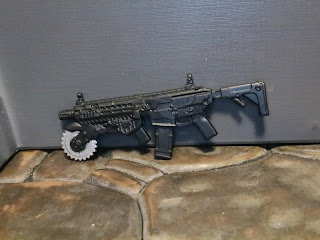 * The vintage Zarana had a funky "razor honed spur cutting weapon" that looked like an old timey shotgun of some sort with a pinwheel-like blade on the barrel. This is a much more modern assault rifle, though, with a saw blade attachment. Kind of like the guns in Gears of War but less extreme. There's even an extra grip handle for operating the sawblade attachment and a silver paint app on the blade. The barrel can also handle a firing effect. 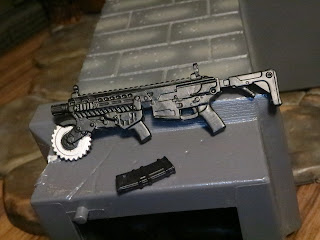 * Is the magazine removable on Zarana's rifle? Yes, indeed. That banana clip pops out easily and stays in securely for real reloading action. 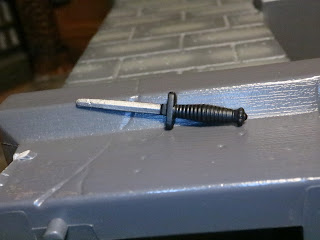 * Zarana comes toting two knives, the first being a slim stiletto similar to the one the vintage figure had on her right hip. It's a nasty little piece with a cool pommel. 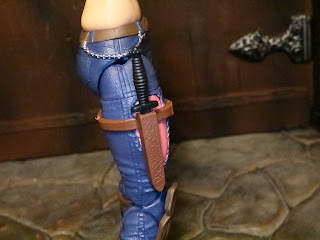 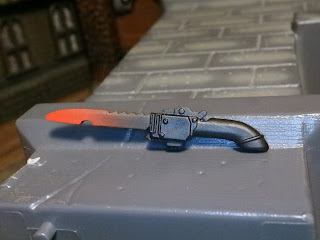 * The second knife is the coolest, though. It looks like some sort of sci-fi knife, like something from Kenner's Star Wars: Power of the Force 2 era. It has an ergonomic blade, a mechanical midsection, and a serrated blade that looks like it's glowing red. Maybe the blade gets heated on this thing? How cool is that. I love it. This is the kind of stuff I want to see more of in the Classified Series. 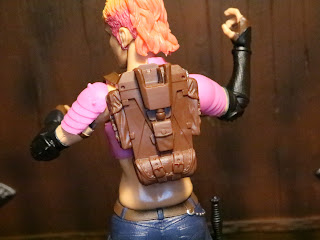 * Zarana's backpack isn't red this time around; it's brown and features lots of little pouches and straps for her gear. It fits on really securely and looks great. 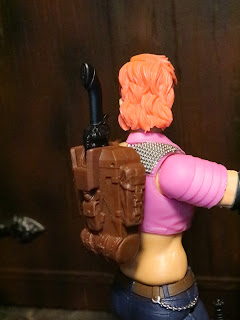 * There's a special slit in the top for holding the flaming hot chain knife, too. The blade slides right in and keeps her weapon within easy reach. 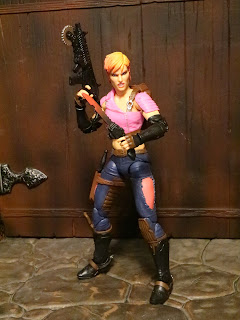 Zarana is definitely one of the best of the year. Heck, not even one of the best G.I. Joe Classified Series figures but just one of the best figures of 2022 period. I've had her since late November or early December now and I just absolutely love her. She's definitely Epic and Hasbro did a stellar job on her. She's an atypical G.I. Joe character (not a standard uniformed soldier or a Cobra trooper of sorts) but she's a great example of the Classified Series firing on all cylinders. She's clearly inspired by her vintage counterpart but she has some new features, some enhanced details, and some improved and more imaginative weaponry. I very well may do a top ten G.I. Joe Classified Series releases of 2022 and it's probably a surefire thing that Zarana will be setting near the top, if not on it. The vintage Zarana was never one of my favorites, so either the current Joe team really worked their magic or I've just developed more of an appreciation for dangerous, pink haired punk women in my late 30s.