Wrapping Up 2022: Frosta from Masterverse/ Princess of Power by Mattel 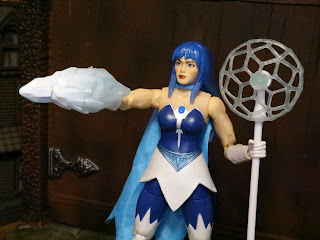 Another Princess of Power Masterverse review? You better believe it! Mattel is offering up an excellent character selection in this line and I'm chilled... er, I mean thrilled, to be checking out Frosta, the Ice Empress of Etheria. The last time we got a full action figure of Frosta was in Masters of the Universe Classics back in 2012 so it's very exciting to see her here again. MOTUC kind of felt like a line that was delivering characters in action figure form who we had never seen before and would likely never see again, but Frosta definitely seems to be a fairly popular character and one worthy of getting an action figure more than once per decade (I really want her in MOTU Origins as well). When I review toys at the end of the year it's often kind of difficult to decide whether they're technically end of the year releases or beginning of the year releases. I'm counting Frosta and this final series of 2022 Masterverse figures as 2022 releases, so let's take a look at another figure from Masterverse that shows why it was such a fun MOTU toyline last year.... 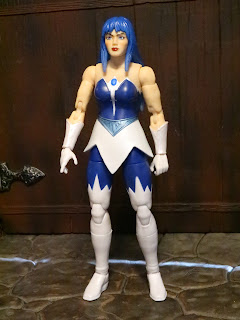 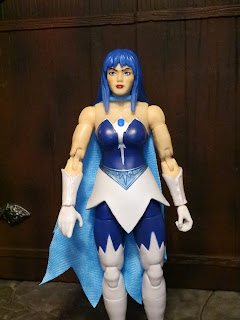 * While Frosta shares a fair amount of parts with She-Ra, she still has a very distinctive look thanks to her gorgeous blue and white color scheme and her unique outfit. One of the complaints about the MOTUC Frosta was that her costume was more of a grayish white rather than a pure white, but things look to be much brighter here. She really follows after the Filmation character model, which is probably what most fans prefer. The paintwork is neat and the little details like the blue gem on her bodice and the icy design on belt nicely add some more character to her look. 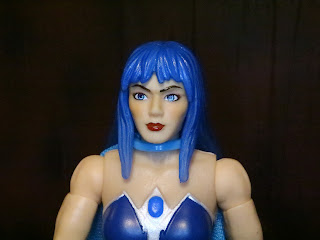 * The portrait looks a lot better on this version of Frosta than on the MOTUC version. it might be simpler with more of the style of the MOTU Revelation, but it works. Her hair is bold and beautiful and the paintwork on her face is all neat and clean. Also, her lips look fantastic. Nice and red, which really stands out. 💋 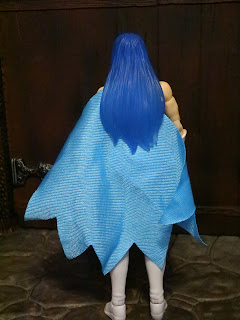 * A soft goods cape completes Frosta's ensemble. The cape is removable if you want to take it off; just pop off her head and the collar slips over her neck. 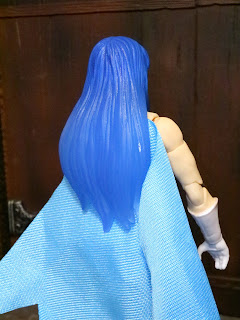 * Queen Mackenzie of Etheria has a special surprise: Her hair can change color! Place it in cold water or in the freezer and it turns very dark. Place it in some warm water and it turn ice blue, very light. This is a really neat feature that isn't actually advertised on the box. I can't remember where I first heard about it, though I did receive this figure on a very cold day and the hair was extremely dark, which led me to recall hearing rumors about this action feature. 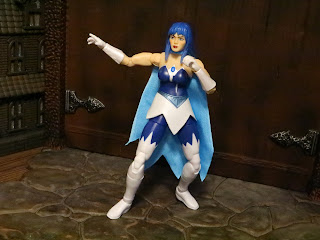 *  While it isn't as smooth as some lines, I'm still happy with the articulation in Masterverse. It's definitely one of the best lines in terms of the quality of the figure builds and articulation scheme that Mattel has put out and it keeps improving. Frosta moves nicely and has plenty of useful joints with a great range of motion. She's really fun to pose and mess around with, especially when using her ice power hands. 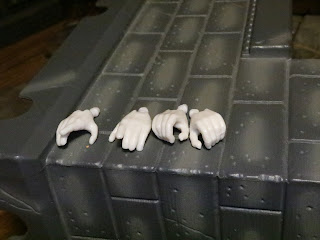 * Frosta has two sets of hands which can easily be swapped out: A pair of spellcasting hands and a pair of standard grips for holding her staff. 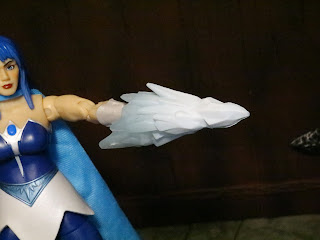 * Frosta comes with an ice effect which can fit over her hands to showcase her ice powers in action. It's molded in a translucent blue plastic with white paint apps to make it appear more icy and snowy. It's a fun way to show off Frosta's powers and makes posing her more fun. Let it go, Frosta.  ❄ Let it go. ❆ 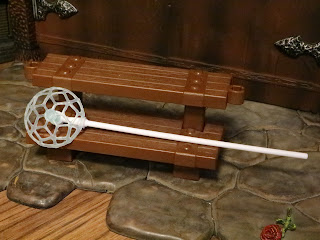 * She also includes her long staff/ magic wand from the vintage toyline. Here the head of the staff looks clear and icy and it can spin when you rotate it. The staff itself is long and thin, but it's not brittle or anything. 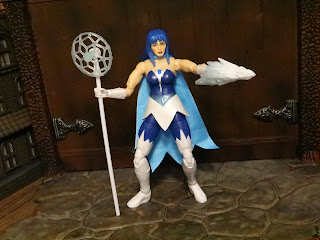 Frosta turned out to be a rather nice figure. She's certainly not the best Masterverse figure of the year or anything but I absolutely love her wintery color scheme, her gorgeous hair, and that ice effect. The staff is a nice upgrade of the vintage action figure accessory, too. She gets a Great from me and is well worth adding to your collection, especially if you're a Princess of Power fan. This is the Frosta we know and love and she's here to make our collections just a littler bit....cooler.😎

Which member of the Great Rebellion do you most want to see in Masterverse next? I'm hoping for Castaspella!


The only other Frosta I've reviewed is the Slime green M.U.S.C.L.E. Frosta from the Trash Can Wave 4 (Slime) PowerCon exclusive set.