Wrapping Up 2022: Batwoman Unmasked from DC Multiverse by McFarlane Toys 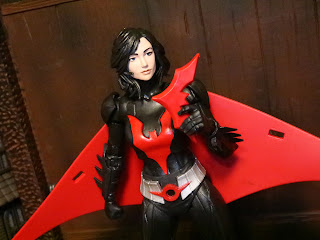 Near the end of last year I picked up Batwoman Unmasked, only the second figure I've picked up from McFarlane Toys' DC Multiverse line. I found her on sale for a really good price at GameStop and snagged her just because I liked the look of her. That black and red is sharp! She's an unmasked variant of the Batwoman Beyond figure from 2021, but I don't remember that one coming out. This is Elainna Grayson, the daughter of Dick Grayson, in the batsuit this time. She takes over for Terry McGinnis in the Futures End setting of Batman Beyond but soon establishes her own identity. I've been taking more notice of McFarlane's DC Multiverse line lately as the character selection and quality of the figures released just keeps getting better and better. The upcoming Batman from Hush and 1990s Catwoman really have captured my attention, so maybe I need to keep a closer on this line, huh? Let's take a look at Batwoman Unmasked after the break... 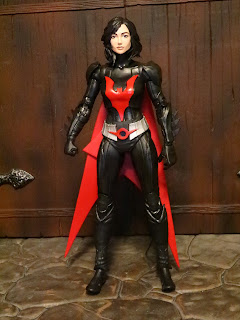 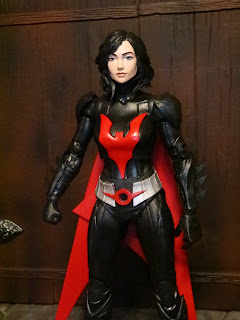 * While I was never a huge fan of Batman Beyond (it's a good show and has been a good comic series, it just was never my favorite), I have always liked the sleek costume design of the Batman Beyond batsuit. I love Kate Kane as Batwoman, though, and her black and red costume is one of my favorite superhero costume designs of all time (particularly her look that really took off during the New 52 era). Elainna Garyson's take on the batsuit really reminds me of a great combination of the looks of both Kate Kane and Terry McGinnis, with a shiny, futuristic bodysuit, bold and beautiful crimson red highlights, and some fantastic details that stand out yet still give the suit a sleek look. The bat logo on Batwoman's chest is raised from the suit and her seek, silver belt nicely connect the Batwoman Beyond look to a classic Batman design while still maintaining that futuristic edge. 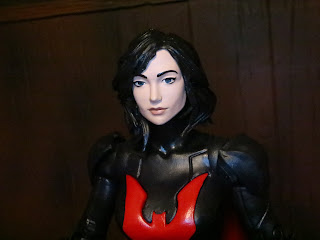 * While I do wish McFarlane would start offering more figures with swappable portraits (variant heads like this are so 15 years ago), I do like the portrait of Elainna Grayson. She's quite cute with fantastic hair. The paintwork is neat and clean, and her eyes look great. There's a little side eye here, bit it's not too bad. I actually really like it. 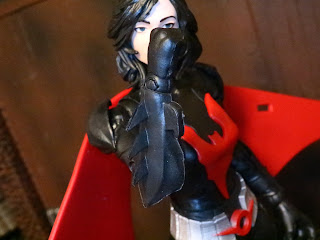 * One of the things I always judge Batman and Batfamily figures on it how the spiked protrusions on the gauntlets turn out. Elainna's are fantastic. There are three spiky spikes on each gauntlet and a tab which she can use to connect to her wings. 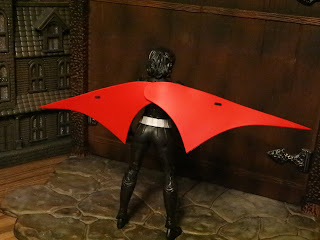 * Speaking of wing, she has wings. They're crimson and they fold out from her back on a swivel joint which ratchets, keeping them nicely in place. 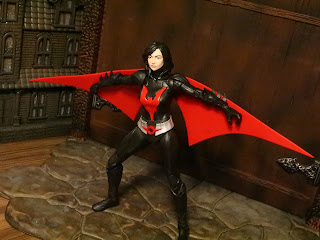 * The tabs on Batwoman Beyond's gauntlets can slide into the slits on the wings, allowing her to attach to the wing-suit for better mobility. I think this is a pretty darn cool feature and I love how it looks. It's really fun to mess around with. 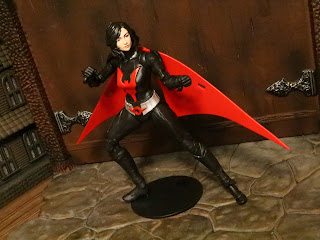 * Elainna has excellent articulation. Seriously, she has a fantastic selection of joints, most of which have an excellent range of motion. She's a very sturdy, durable feeling figure. I love the feel of McFarlane's DC Multiverse, Mortal Kombat, and Spawn figures, and I'm happy to find that they have a very consistent quality. This figure actually convinced me to pick up a few more DC Multiverse figures. 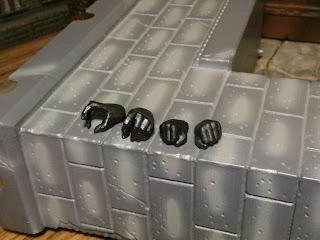 * If you want to swap up hands for Batwoman Beyond, she has a pair of gripping hands and a pair of fists. They swap easily and the wrist pegs (which are on the figure, not on the hand) are really slid and durable. 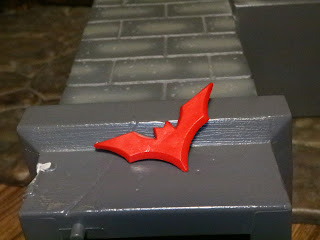 * This batarang is cool. It's nicely shaped, decently sized, and it matches Batwoman's wings and chest logo. 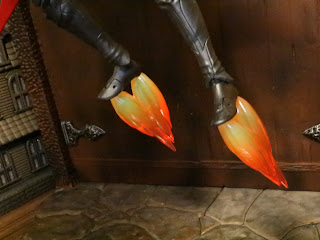 * She's also sporting some jets that can attach to the bottoms of her feet. These are insanely cool. They look amazing! Each piece looks like the jet effect of two thrusters and they fit on and stay on oh so well. 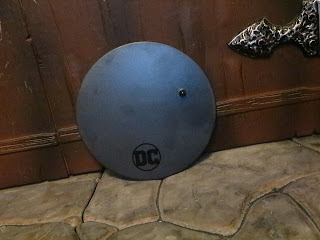 * McFarlane Toys includes a display stand with each of their releases these days it seems, and I couldn't be happier. It has the DC logo on it and it Keeps Elainna Grayson standing at the ready, or aids in more extreme combat poses.

* The figure also includes a trading card, which is standard for this line. It is kind of odd to me that the card is a picture of the figure rather than some comic art of the character, but I do like that there's a pretty solid character bio on the back. That's kind of a rarity on mass market retail toys these days. 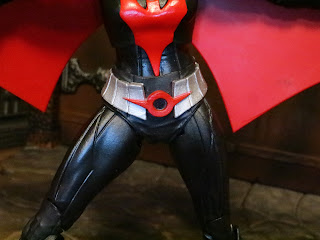 
* People tend to disparage the "diaper" crotches of this line and while I think this one looks better than many I've seen, I'm definitely not that big of a fan of this style of waist. Yeah, it does cover up her articulation, but there's something about it that just looks off to me. 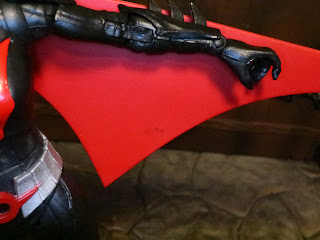 * One of the wings on my Batwoman has a bit of a scuff on it. See it? Well, it's really not that noticeable, but it is there. 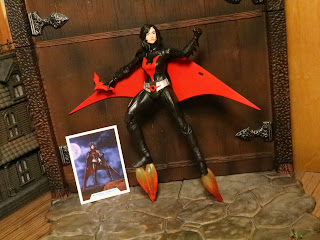 Good grief! This is a really, really nice figure. My complaints are pretty minor and overall I'm just really happy with how this Batwoman Unmasked figure turned out. I mean, for the $20 dollar retail price (and I paid quite a bit less on a GameStop sale), you're getting an gorgeous figure with some cool accessories. Oh, and a display stand. I largely ignored the first year or two of McFarlane's DC Multiverse line but now that they're starting to make more figures I have an interest in and have a wider character selection, I'm definitely picking some up here and there. Batwoman Unmasked/ Elainna Grayson is an Epic figure.

For more DC Multiverse reviews from McFarlane check out the following:
Harley Quinn (The Suicide Squad)